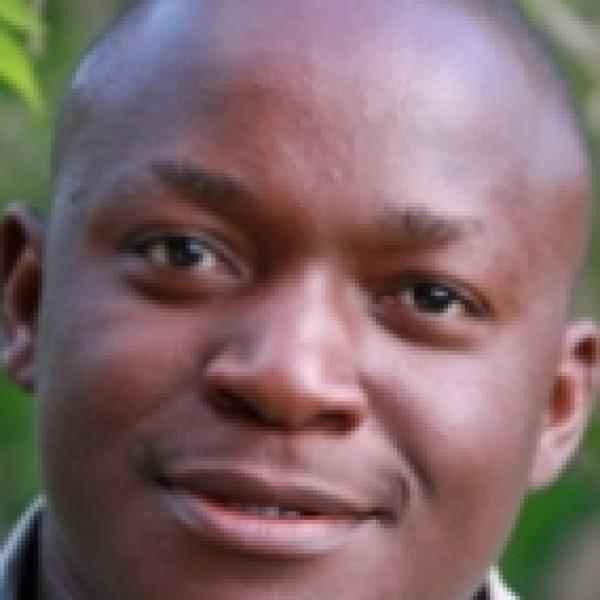 Disabled youth face significant barriers to formal employment; and in addition, lack entrepreneurial and leadership opportunities in Kenyan society. Fredrick Ouko is working to challenge societal and employer discrimination toward those with disabilities, and his work encourages the development of self-confidence among disabled youth.

Fredrick is creating a barrier-free and equal opportunity society for youth with disabilities; and in doing so, is unlocking their previously untapped potential within society. To do this, he is working to create a platform (in and outside of the formal workplace) to remove unfounded fears and discrimination toward people with disabilities. The platform helps youth with disabilities shed their self-victimizing attitudes and develop the skills and confidence they need to become active agents of change in their lives and communities.

Fredrick’s organization is the first and only organization in Kenya that focuses specifically on employment challenges faced by youth with disabilities nationally. He is leveraging this unique position to make this a focus for the mainstream disability movement. By integrating a governance program into his approach, Fredrick is seizing the moment to prepare youth with disabilities to play an active role in reshaping the leadership structure of Kenya; and, thus, promote inclusiveness even at a policy level.

Kenya’s population, like many African countries, is comprised of mostly young people below the age of 30. This demographic segment accounts for about 75 percent of Kenya’s total population of 40 million. Among the many challenges that young Kenyans face, the most pertinent is unemployment. With the national unemployment rate standing at 60 percent, Kenya’s youth account for 64 percent of this disenfranchised group and are the worst hit by Kenya’s already high rate of poverty (currently at 45 percent of the population). Given these statistics, the odds are stacked against most of Kenya’s young people who seek a job in the formal employment marketplace. It is worse for young people with disabilities who, in addition to these odds, are faced with stigma and discrimination at all levels.

Persons with disabilities account for more than 15 percent of Kenya’s population and are faced with extremely high levels of unemployment and poverty. Stigma and discrimination for this group know no boundaries and often begins in the family. In traditional African culture, disability within a family is looked at with scorn and disappointment. Parents are forced to hide their disabled children lest the neighbors see them. Many of these children are denied the opportunity to go to school; and for those that are lucky enough to get there, there is a high chance that they will be taken to special schools that alienate them from mainstream society. Very few mainstream schools cater to the needs of students with disabilities.

The situation is no different in the formal workplace where the general perception is that people with disabilities are a liability to the employer. This makes it ten times harder for even a university graduate with some form of disability to find employment. Such discrimination over the long-term breeds self-stigmatization and a chronic lack of self-confidence among people with disabilities. Hopelessness drives many disabled youth to living a life of isolation and dejection. Severe cases of depression and loneliness has led some to begging on the street, drug abuse and in some cases suicide.

Although employers generally recognize the need to create a more inclusive work environment, few are motivated to do so. This can be attributed to a general lack of experience with working with people with disabilities, or knowing how to anticipate and manage specific needs that they may have. Because most employers don’t know what to expect, they see working with disabled people as a risk they would much rather avoid. Unfortunately, because there are no strict policies or enforcement mechanisms, the idea of inclusion will remain just that—an idea. Without representation of youth with disabilities within the leadership structures of Kenya to more strongly advocate for inclusion and to put in place incentive and enforcement structures the reluctance of employers to make their workplaces more inclusive may continue to drag on.

Fredrick started the Action Network for the Disabled (ANDY) with two goals. One was to change the negative perception that employers have of people with disabilities. He wanted to demonstrate that disabled people can be just as smart, hardworking, and productive as anyone else and that despite popular belief, they can be valuable assets to their employers. Secondly, he wanted to create a support system through which disabled youth could make the transition from disempowered and hopeless victims of stigma and discrimination to confident, able, and active agents of change.

Having lived and worked in Kibera for a few years, Fredrick knew that the slum was a popular hideout for youth with disabilities who had lost hope achieving their dreams and aspirations. This was, therefore, his initial target when he decided to set up a leadership and entrepreneurship-training program. Upon recruitment into the program, members are taken through a rehabilitation and confidence-building program, coupled with sports including football, basketball, swimming, volleyball and such, to help them develop skills in teamwork, leadership, self-discipline and hard-work. In addition, each member is helped to identify their passion around which they are helped to develop a relevant skill set. Some members aspire to follow a career path in employment while others choose to be entrepreneurs.

Through a unique internship program coordinated by ANDY, Fredrick matches the skills and passions of individuals from the former category with the needs of a select group of companies. These companies are selected based on their willingness to not only take an intern with a disability but to also transform their internal systems, processes, policies, and culture into more inclusive ones. As these companies make the important transition to inclusiveness, ANDY plays the role of transition partner; providing them with the tools, resources, and guidance they need in addition fully facilitating the intern they employ. This institutional make over exercise takes place before, during, and after the internship. 100 percent of the cases of this three-way relationship have resulted in a transformed, all-inclusive company and 60 percent have resulted in permanent employment of the intern. For those with entrepreneurial aspirations, an internship within the field they are interested in is the first step before starting their own ventures. Upon reaching the business start-up phase, ANDY gives them access to capital and other resources.

Beyond enterprise and corporate employment opportunities, Fredrick is also giving young people with disabilities the opportunity to participate in leadership and governance of their communities and country. Through a unique governance program that helps those interested in political leadership learn the principles of servant leadership, Fredrick is grooming a new cadre of leaders from within this marginalized group to represent and more strongly advocate for the interests of young people with disabilities and those of the community at-large among a leadership that is currently fraught with self-interest and misguided priorities. In doing this, he is trying to demonstrate at the highest level, the value that persons with disabilities can bring to their communities, so as to start slowly increasing the proportion—which is currently negligible—of persons with disabilities in political leadership.

After six years, Fredrick has already made strides in shifting the mindset of large corporations in Kenya having worked with thirty. To tip—on a much grander scale—the behavior of companies in Kenya toward persons with disabilities, Fredrick feels that he needs to get to 100 large companies over the next five years. So far, over 300 youth with disabilities have found job placements through his program and many more have undergone personal transformation and received support to start their own ventures. Setting his sights higher, Fredrick is now involved in advocacy work on a Pan-African scale. With support from the International Labor Organization, Fredrick played a key role in founding the African Youth with Disabilities Network, a Pan-African initiative involving twelve countries across Africa. In addition to enabling him and other youth leaders to share their models internationally, this network gives young people with disabilities a voice and a platform to advocate for a stronger focus on inclusion across Africa at the African Union, European Union, the World Bank, and other global institutions.

Fredrick is one of nine children in a family and the only one with a physical impairment. Growing up in rural Nyanza province, his hero was his father, who believed in him and gave him a good education despite neighbors and friends advice to the contrary. His father had a policy in his family that he would only pay school fees for those among his children who performed well in school. Fred was fortunate to be in this group as he excelled all through his education. When he finished his secondary school education, he moved to Nairobi and lived in Kibera, where to earn an income for himself and other youth in the slum, he started the Kibera Community Youth Program. The group focused on creating income-generating opportunities for unemployed youth and engaged in activities such as music, dance, and drama in addition to sourcing contract jobs from visitors and organizations that needed logistical support to organize events within Kibera.

Through this program, Fredrick did more than survive, and was able to pursue and complete a diploma qualification. After finishing his diploma, he looked for a job and his experience would go on to define the rest of his life. He recalls stepping into the interview room of a well-known multinational and being met with frowns and looks of disappointment. An interview that took fifteen minutes for other candidates took two minutes in his case, and his fate was sealed. He never got the job. Even though it wasn’t said, he vividly recalls knowing with certainty that his disability had been the cause for the company’s harsh rejection. Fredrick didn’t look for another job, instead, he rolled his sleeves and started Action Network for the Disabled in Kenya with the purpose of ridding the formal workplace of stigma and discrimination toward young people with disabilities.