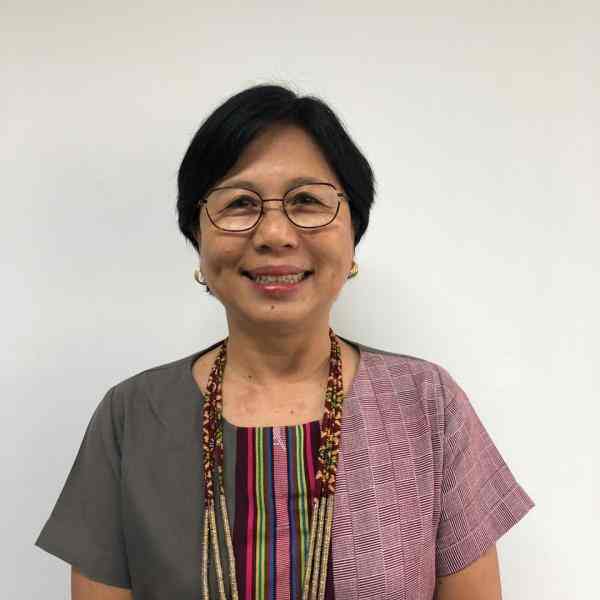 Dinny Jusuf is changing the long-standing pattern of outward migration amongst Indonesian women as domestic helpers by eradicating the poverty issues faced by them and creating regenerative economies around the art of backstrap loom weaving in remote communities in Indonesia.

Dinny is changing the pattern of migration in Indonesia by empowering women who are economically and socially vulnerable, with a laser focus on providing a range of support that are necessary but feasible for them to leverage themselves into being able to support their children/families from home through the practice of indigenous weaving which is a skill embedded in their hands or family memory. That laser focus hones in on the population of women who are particularly susceptible to resorting to migration for jobs from remote islands in Indonesia.

Dinny is driving an increase in income and dignity, as well as leadership capacity, for women to stay home and weave for a living, disrupting the old pattern of women migrating to escape poverty. Through Torajamelo, Dinny is improving the socially perceived value of traditional weaving, empowering the women weavers as a collective within the market, creating a fair supply of thread, and changing policy around attire in communities to promote local and traditional woven dress at ceremonies and events. Women are now collaborating, engaging in peer-to-peer learning of skills, thereby passing the knowledge of traditional weaving to other women and the next generation to revive traditional weaving as a source of income and a lever of cultural revival in communities that have long faced a decline due to the dominance of the non-indigenous batik.

Her organization ultimately seeks to change mindsets towards the indigenous fabric and traditional practice of weaving to develop a real economic supply chain for the practice of weaving. Her work, as a result, induces cultural restoration and dignity of the women and people of Toraja and beyond, so that the women of Toraja and Indonesia can stay home to seek economic empowerment in their own communities.

In Indonesia, approximately 40% of the population remains vulnerable of falling into poverty as their income hovers marginally above the national poverty line, with a high proportion of it being women living in rural and remote areas. This is because women in these areas tend to relatively lack access to infrastructure services, economic opportunities, education, individual agency, entrepreneurial self-development, and maternal healthcare. Despite this fact, rural women bear the brunt of raising the household and participating in agriculture. They play a key role in supporting their households and communities in achieving food and nutrition security, generating income, and improving rural livelihoods and overall well-being. Yet, every day, in Indonesia and around the world, rural women and girls are often limited by the cultural gender roles they are assigned and face persistent structural constraints that prevent them from fully enjoying their human rights and hamper their efforts to improve their lives as well as those of others around them.

As a result, the country is deeply suffering from an outward feminized labor migration: approximately 400,000 Indonesians are registered to have legally migrated to other countries each year since 1998. The actual figure is estimated to be much higher because many migrate illegally. Of this number, 83% are women. More than 90% of female migrant workers work in the informal sector as housemaids, mainly in Saudi Arabia, Malaysia, Kuwait, Singapore, Hong Kong, and Taiwan. The rest works in the agricultural and industrial sectors as daily labors, as caregivers to the elderly, shop assistants, and as waitresses. Some women also migrate to be sex workers. Many of them come back to Indonesia either abused, undesirably pregnant or even dead. According to Migrant Watch, 1,267 Indonesian domestic workers were reported dead and their bodies returned between 2012 to 2017. Meanwhile, the families and communities left behind by them become increasingly broken: they lose the support these women provide and often welcome back broken women.

In parallel, in these rural areas, the traditional practice of weaving as a sustainable economic activity exclusively run by women is currently dying across Indonesia - like in many other countries in the world. This is the result of both the decrease of the demand due to new ways of life and the existence of an ecosystem of market forces that disempower the women. In addition, these women have to contend with a caste-like system in places like Toraja where most of the weavers occupy a lower caste position in society. The opportunity for changing the gendered condition of poverty in Indonesia lies in the fact that most of more than 300 ethnic groups who live in Indonesia can weave, especially in the poorest and most remote areas, where there are few alternative income opportunities. Besides the economic aspect of it, hand-woven textiles play an essential social role in the ceremonies and life rituals of these ethnic groups.

Torajamelo is using a hybrid model of enterprise and foundation to create a shift in the pattern around the supply, demand, and practice of indigenous weaving as a tool to induce the desired systemic shift of outward migration patterns. Dinny believes that the development and marketing of weaving products improve local economies, preserves culture, and sustains family life by enabling women to stay in their communities rather than become migrant workers. She has attracted the support of cultural leaders and celebrities and of government officials who have begun to limit the migration of mothers of young children.

Traditionally woven cloth in Toraja was for the longest time seen as a low class while batik from Jakarta symbolized a higher class aspiration. This problem was compounded by the fact that there exists a caste system in Toraja, where the weavers are often in the lower caste. To do so, the Foundation showcases and promotes the traditional practice of weaving in Toraja and across Indonesia to the country and beyond, through exhibitions, engaging young creatives, as well as driving thought leadership around the issues facing women in Indonesia. To this end, various famous people have worn Torajamelo products - from rapper Jflow wearing a Toraja Melo outfit at the closing ceremony performance of the Asian Games 2018, to Hollywood’s Andrew Zimmern showcasing Torajamelo. The foundation also drives demand by changing local policies that are now promoting or mandating the use of local textile in ceremonies and civil service (Every Friday in Toraja).

On the supply end, Dinny navigates the middlemen who have been controlling thread and exploiting weaving communities, by creating a fairly-priced supply of thread. Her work with Ashoka fellow Nani Zulminarni (PEKKA) allows her to mobilize the community of women weavers and provides training for women to improve their output. PEKKA helps to organize and train these women granting Dinny access to more weaving communities of women through the PEKKA network on the ground spanning over 20 provinces. Dinny encourages more women to look favorably upon the practice and join the practice of weaving constantly working on improving the status of weaving and of women weavers.

As a result, there is a cultural revival driven by Torajamelo. This revival manifests in an increase in dignity and ceremony around local textile and weaving, as well as the saving of dying or extinct patterns which represent the heritage and cultural identity. More and more young women pick up weaving, some having described it as a meditative activity that pays for school. Torajamelo currently works with 1000 weavers across four communities and regions. Because of the resurgence in pride and local government support, weavers today commonly have orders back-to-back scheduled ahead into the future, some booked for six months in advance.

This cultural shift has begun to change the pattern of migration that has long afflicted these communities. Torajamelo has increased incomes from weaving, fueled by the cultural revival: on average Master Weavers saw their incomes jump from 1 Million to 3 Million IDR, the average middle-aged weavers saw theirs jump from 500,000 to 3 Million IDR, and other women who picked up weaving from scratch due to this development earn about 2-3 Million a month from initially earning nothing. Significantly, women have become sole breadwinners of income in many instances, due to the fact that men traditionally tend to the fields and do not bring cash back regularly. The economic empowerment has allowed them more control and ability to plan their lives. Dinny aims to scale up to 5000 weavers as her next target moving to do the same in other communities in Mamasa, Adonara, Lembata and beyond to create this shift in migration patterns nationwide so that women can come home to be with their families and weave as a viable and respected economic activity.

Dinny is currently working to shape policies at a national level towards the protection and promotion of traditionally woven textile in ceremonies and dress of the community. Dinny has also co-founded Wastra Indonesia, an organization of high-impact individuals with a passion for educating the younger public on local textile and batik, and also preserving and appreciating the high art of woven textile and batik. To reduce risk in her model, as well as amplify and scale her impact, she looks to develop geotagging of local textile, e-commerce, and increasing Community-Based Tourism to boost the economic independence and security of the women weavers. Beyond Jakarta and Singapore, Dinny has also made successful forays into Japan, where she has demonstrated a demand for Torajamelo products. She has therefore demonstrated commercial viability in these three markets.

Dinny often describes herself as a mother, wife, and dreamer. She started her professional career working for Citibank Jakarta in various areas such as marketing, training and private investment which lead her to travel and work in many different places of the world like Singapore, Hong Kong, Zurich, New York or Manila. With no university education, she joined Citibank as a secretary and eventually worked her way up to the role of Assistant Vice-President of Citibank Indonesia, representing Indonesia at the Women World Bankers.

When it came time to take care of her growing children, she left Citibank and chose to stay in Indonesia even though her parents and siblings moved to the US on a green card to escape the growing racial tensions that put them in danger during the Soeharto era. She realized that many Indonesians did not treasure the culture, beauty, and diversity that Indonesia possesses, and had to learn more about Indonesia through the expats who lived there.

Dinny got involved with various social programs, following the violence on Chinese women in Jakarta in 1998. The rape and violence inflicted on women during this period deeply impacted her and informed her life mission today. During the 1998 crisis, Dinny and her peers began a movement called Suara Ibu Peduli (The Voice of Concerned Mothers) that captured the hearts of Indonesians nationwide through a legal and social struggle, sparking the climax of the 1998 Revolution which deposed the dictatorial Soeharto. Within a few years, she was the Secretary-General for the National Commission on Anti-Violence Against Women in Indonesia.

In 2008 when she moved to Toraja she noticed that many Torajanese women were migrating for domestic work and commonly got abused or impregnated overseas. She also saw that nobody was buying and wearing Toraja textiles that many of these women would weave and sell, and she wondered what she could do to solve this great problem. Eventually, she bought a few pieces of the textiles and brought them to Jakarta. She asked a friend who is a famous batik maker for her opinion on the textile, and was told to “Use the textile to create something”. She has never looked back since.