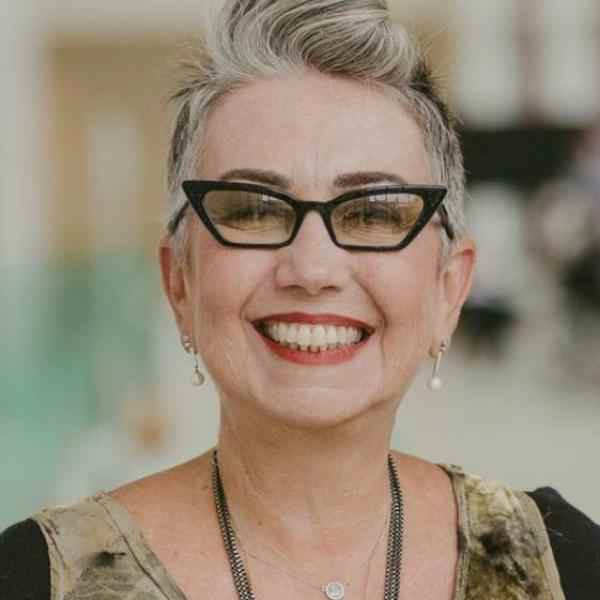 Cláudia Marina Werneck Arguelhas promotes social inclusion of the disabled using workshops involving school-age participants, both with and without disabilities, helping them to recognize the value of diversity and to become agents of social inclusion.

Through her work as a journalist, Cláudia realized that often even parents and health professionals knew little or nothing about Down&#39;s syndrome. Her perplexity led her to take on the struggle for social inclusion of people with medical disabilites. She created Escola de Gente, with the dual mission of promoting values inspired by human diversity through activities involving communication about inclusion and focusing on the defense of rights of children and youth with disabilities.
Through her school, Cláudia stimulates Brazilian youth to become agents of inclusion. In contrast to what happens with most capacity-building efforts in Brazil, which are generally focused on teachers and managers, Cláudia works with youth 13 to 26, because she believes that without the creativity, ethics, and flexibility of youth, building an inclusive society will be a very long process. The goal is a society that conforms to United Nations Resolution 45/91, which calls for a change in the global focus in terms of disabilities, and works toward the transition from awareness to action in order to build a world that includes rights and opportunities for everyone by the year 2010.
Cláudia knows that it is not enough simply to want to stop discriminating, but rather, that it requires study, constant effort, and learning from mistakes. Thus, she believes that youth and adults should work together toward inclusion by starting in school, which she considers a country&#39;s greatest asset. This approach allows the student to transcend the role of mere recipient of information, and instead, to contribute to the implementation of the ideas being learned. Her project treats young people as partners in the collective construction of ideas and expands their impact in ensuring that future generations of Brazilians will find a society that is more like what they want it to be.

In Brazil, persons with disabilities account for 14.5 percent of the population. There are more than 24.5 million children, youth, and adults who encounter special difficulties in gaining access to schools and employment opportunities. Studying in a school system with a curriculum that is disconnected from reality, Brazilian youth see themselves as ready to face the challenges of life without ever having faced the reality of diversity, never having coexisted with peers with disabilities stemming from birth or accident. In this context, even young people with deficiencies have difficulties relating with others of the same age with different types of deficiencies. Thus, because of this lack of exposure to diversity, even those members of groups traditionally segregated or excluded reproduce the habit of segregating themselves even further.
Because they are so serious, social problems in Brazil take precedence over reflection on what it is to be human–reflection that ought to precede and permeate the debates about the political, economic, and social spheres. Over the generations a code of silence developed that allows a constant flow of inappropriate ideas about taboo issues in a context where the lack of education about the issue ensures the continuation of prejudice. In spite of its intrinsic relevance in any discussion about humanity, the problem of deficiency is still not considered by parents and educators as fundamental to ensuring that children and youth are aware of their rights and responsibilities as citizens. The result–given the complacent attitude of adults–is that the laws regarding inclusion are not respected. Thus, Cláudia leads children and youth to rethink the idea of humanity so that everyone can recognize their role in the construction of a world without exclusion.

Upon discovering the lack of knowledge and information about Down&#39;s syndrome, Cláudia decided to fight to change the situation using her strongest weapon: the written word. Shortly thereafter, she launched the first of her nine books, Muito prazer eu existo (A Great Pleasure to Exist), the first book about Down&#39;s syndrome written for laypersons in Brazil. From that point on, her activities and participation in seminars and conferences expanded greatly, and she became a reference in Brazil and beyond. Based on experience she had accumulated over more than 10 years, Cláudia created Escola de Gente–Comunicação em Inclusão. Its goal is to transform Brazilian youth into agents of inclusion. To train these youth, the Escola de Gente employs different of methodologies.
The so-called &quot;inclusion workshop&quot; involves a set of dynamics aimed at provoking reflection about the inclusion of vulnerable groups in society, specifically persons with disabilities. It is inspired by the idea of an &quot;ethic of diversity&quot;–and the more heterogeneous the composition of participants in the workshop, the more incisive and provocative the outcome. Specially developed group dynamics have two goals: first, they make participants face the difficulties that persons, even the very young, have in practicing ethical values inspired by human diversity; and second, they develop in participants a critical perspective on public policies that are supposedly inclusive but that, in fact, rarely take into account, in the same social spaces, all the human conditions.
The low-cost workshops have a transformative character and the ability to replicate; they also conform to Brazilian and international laws, according to the Interamerican Convention for the Elimination of All Forms of Discrimination against Persons with Disabilities, better known as the Guatemala Convention. Each workshop involves between 20 and 25 participants, lasts around three hours, and is facilitated by two youth and an interpreter of LIBRAS, the Brazilian sign language. Ideally, at least 15 percent of the participants are people with a range of disabilities (physical, sensory, mental, and multiple). Each type of disability generates different obstacles to communication among the youth–obstacles that the group tries, together, to remove.
Cláudia intends to make the Escola de Gente a center for the creation, study, and promotion of innovative, replicable, and self-sustaining methodologies for training Brazilian youth as &quot;Inclusion Agents&quot; wherever they happen to be. In this process the goal is to inspire and improve policies and practices of governments and the citizen sector. Two other methodologies are also being developed in the school–Media Meetings and Inclusion Workshop Leaders–for training groups of youth to be capable of conducting inclusion workshops throughout Brazil.

The daughter of professors, Cláudia was born in Rio de Janeiro, and at an early age she began to exercise her greatest talent, the power of the word. With the help of her historian father and other friends, as a child she began to edit a small newspaper, O Teleco-Teco, devoted to the Rio community where she lived, in the district of Grajaú. Thus, she discovered her gift for journalism, and especially for journalism devoted to the common good. Elected class and student association representative in practically every grade, she won writing contests, studied singing, orchestra, percussion, piano, oboe, and traveled throughout Brazil as a member of musical groups. After a year of study in England, she returned to Brazil, completed a course in communications, and worked at newspapers and magazines in Rio de Janeiro. She then joined the administrative sector of the Brazilian Development Bank (BNDES), where she exercised the organizational capacity and systematic approach that later would allow her to implement her social project.
In 1991, when she left BNDES and resumed her journalism career, an article about Down&#39;s syndrome changed the direction of her personal and professional life. In conducting the research for the article, which would win a journalism award from the Brazilian Medical Association, Cláudia was surprised by the lack of knowledge about Down&#39;s syndrome, even on the part of healthcare professionals and parents from all social classes. Shortly thereafter, she published the first of her books. Its success led Cláudia to launch the journalism project &quot;Muito prazer eu existo&quot; to disseminate information about chronic disabilities and diseases to adults and children, and to found, with her husband, the publishing house WVA, specializing in inclusion. This became the base for her work. Since then, she has replicated studies and activities for inclusion of the disabled through work that has already reached various regions of Brazil.