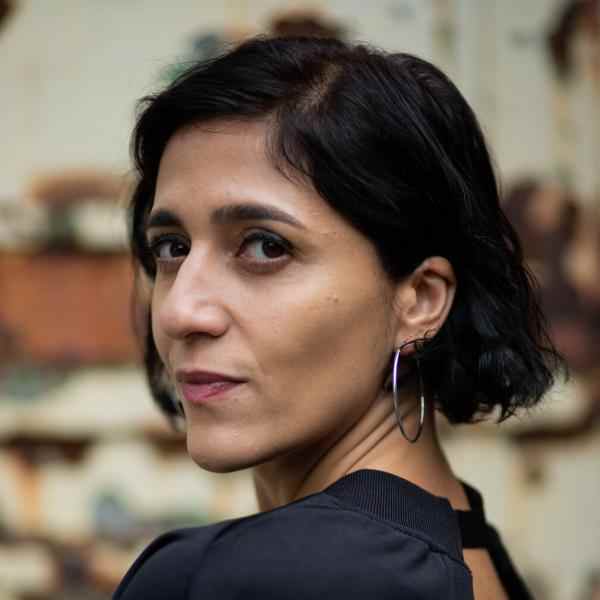 Long after Roma slavery ended, Roma women across Europe still face structural inequalities (social, cultural, economic), which prevent them from taking active societal roles. In this context, Carmen empowers Roma women to own their unique voice, become changemakers in their communities, and write a new narrative about themselves.

As a Roma woman who experienced multiple discrimination, Carmen concluded that to reshape the mindset and the image of Roma women, she needs to nurture spaces where Roma women heal from their traumas and equip them with tools to become their own advocates, improve intergenerational communication, and put a dent on the roles they are pushed to fill in. All of this, while building a narrative around their identity as individuals and as members of their family, community, and society. Carmen is weaving together a grassroots community intervention with advocacy work and knowledge piece creation to reshape how Roma women own their identity, how they become active citizens, and how society perceives them.

She is empowering Roma women to shift the power dynamics in their communities and in their relationship with the authorities. They become bottom-up change agents that challenge and reshape mindsets and the law frameworks that exclude them. Carmen founded E-Romnja, the only feminist Roma organization in Romania. It works in an intersectional way to support women in developing a deeper understanding and solutions for issues varying from identity (gender, sexuality) and women’s rights (abortion, gender equality) to housing and local infrastructure.

Carmen sees her life work around building a new and collective pan-European narrative for Roma women, which considers their unique identities. She encourages Roma sisters to be role models for the younger Roma generation that can put a dent on the cultural roles they are taught they need to fill. To ensure that Roma women claim their equal and unique role in society, Carmen is building national and international alliances with feminist, LGBTQI+, art organizations, and embassies, foundations, and policymakers.

With a population of between10-12 million Roma in Europe and 620,000 officially recognized Roma in Romania, this minority is the largest and least represented across the continent. Civil rights groups put the figure at 2 million, more than 10% of the Romanian population, many Roma describing their ethnicity "Romanian" to avoid discrimination. Romania was one of the last European countries to abolish Roma slavery, which was legal for almost 500 years, until 1856. The descendants of these slaves influenced the young to accept exploitation and abuse and ignore the absence of dignity and respect for themselves. For many years afterward, Roma people were still dependent on their oppressors. Roma people developed what dr. Joy DeGruy put forward as Post Traumatic Slave Syndrome (PTSS).
Due to the PTSS, it was the master who became the imprint for male parental behavior, and this imprint was passed down through the generations. The price of the post-slavery adjustment is reflected in many of today's practices of Roma communities. Roma men establish agreed-upon beliefs about their members' worth. These beliefs are reflected in the community's standards and values regarding acceptable behavior, educational attainment, and professional possibilities. Roma women are taught to become wives and mothers who take care of the needs of the children, men, and elders in the community. Their worth lay in their ability to solidify the family, obey the husband and men in general, and respect the customs of their kin. This constructs the patriarchal system and the dominant ‘’Roma’’ for which general needs overshadow the specific challenges of girls and women. The public discourse is mostly shaped by Roma and non-Roma men who elude their perspectives and erased or downsized Roma women's identity for centuries.
Roma women have what dr. Joy DeGruy calls “vacant esteem”, the state of believing themselves to have little or no worth, exacerbated by the group, and societal pronouncement of inferiority. It is the combined result of the society, community, and family influence. Society influences through its institutions, laws, policies, and media. The communities in which they live influence them through establishing norms and encouraging conformity to society at large. Their families influence them through how they are raised and groomed to take their place, as the parents see it in community and society. Media contributes by frequently displaying Roma women as uneducated, thieves, dressed in an exotic way, and by sexualizing them. There are very few knowledge pieces written by Roma women about their experiences. Most of the literature is written either by Roma men or non-Roma people who perpetuate the pre-existing stereotypes and prejudices.
Roma representatives hide their lack of intervention, the inequalities, and abuses behind the general perception that Roma women are subjects to an obedient traditional way of life rather than acting according to the law. As stated in the Strategy for Roma Inclusion, 64% of Roma women in Romania declare they could read and write compared with 76% of men. One cause may be early marriages. According to a survey done by the European Union Agency for Fundamental Rights, in Europe, 2% of Roma girls aged between 10-15 are ''traditionally married'' or live with a partner, and around 16% of Roma teenagers aged 16 to 17 are married or live with a partner. Only 6% of the girls aged 16 to 17 who are married still attend school compared with 36% of girls from the same age range who are not married.
Although Romania has signed international treaties on anti-discrimination, gender equality, Roma women are still missing from national strategies. The national strategy for Roma has no specific measures towards achieving gender equality, whereas the national strategy for gender equality is immune to issues related to women from ethnic groups, disabled or LGBTQ+. European level policies focus mainly on general topics around inclusion and access to social services but overlook Roma women altogether. The discrimination that Roma women face in the family extends in society. In the education system, the on-going perpetuated stereotypes affect Roma girls, the rates of dropping out being higher as well as the level of illiteracy. 47% of Roma women still don’t have medical insurance compared with non-Roma women. The mortality rate among pregnant Roma girls and women is 15 times higher than the national rates due to complications. A study released in 2011 revealed that more than 40% of Roma women at their workplace are exploited and discriminated due to their ethnicity and gender (no accusation made due to the lack of support systems). Roma women are subjects of threats coming from nationalist/extremist organizations that declared in favor of sterilizing Roma women who have more children.

Carmen experienced the savior, man-dominated, top-down approach that most sectors have regarding marginalized and minority groups and the PTSS due to centuries of oppression. To build a new narrative, she boldly weaves together different layers of intervention. She empowers Roma women to become bottom-up change agents and uses their insights to reshape legal and societal frameworks. All of this, while creating knowledge pieces that can capture the story told by Roma women about Roma women.

Carmen grew up in a Roma working-class family with both parents from Ursari kin, in a provincial town where most Roma people lived in segregated neighborhoods. As a child, she attended a school with 90% of pupils being Romanians. Teachers used to tell her and her Roma colleague that their destiny is to get married and have children, therefore they were never asked what they want to achieve in life. This came with a lot of shame. Due to this influence, she decided to go to a professional tailoring school, but in less than two years, she realized this was not her call. While taking evening classes to finish high school and tutorship to prepare for faculty, she continued to work in tailor shops to support part of her family and cover her education expenses. She was always outraged about her position as a Roma girl and the inequalities between the girls and boys when it comes to education. She was taught that women must support the family, have more responsibilities, and not complain. Carmen came to this realization herself at the age of 13 when her mother died. The women in her family were the heroes, the stronger ones who could work, educate, and keep everyone together. Carmen found her escape in studying and planning how to change the narrative for Roma women. She was eagerly waiting for the faculty years to access the new world of Roma people in non-governmental organizations who fight against discrimination and find a way to change the narratives about Roma women. After finishing her faculty studies, she focused her master studies on gender issues and later, her Ph.D. studies on Roma history and culture, which fed her resilience towards ''white knowledge''. Carmen became a vital contributor to civil society’s effort to address the needs of Roma communities and women. She was a Member of the National Selection Board for evaluating Roma applications for academic scholarships, worked as an expert on gender issues research papers, and Co-organized the annual Gala for Roma Women.

While working at Agentia Împreună (an NGO focused on Roma community interventions), Carmen teamed up with a social scientist and initiated new interventions for Roma people. On the one hand, she brought together the largest trade unions in the country to analyze Roma people's situation on the labor market. This was a massive success since trade unions focused only on material aspects of a person’s job, not on general conditions regarding race, sex, ethnicity (they didn’t even know how many Roma people were employed in Romania). During her project, trade unions put in place more strict regulations regarding immaterial aspects for employee conditions. On the other hand, this is when, thanks to her travels across the country in Roma communities, she developed projects focused mainly on Roma women. All her grassroots work shaped her knowledge about the systematic oppression of non-Roma people and the need for creating spaces for Roma women to share, support each other and heal from the collective traumas: sexism, class oppression, and racism. As her territory of intervention around women grew, she decided to start her own organization, E-Romnja, where she could bring her expertise from different worlds, Roma and non-Roma, academic and feminist, to develop the new narrative for Roma women.