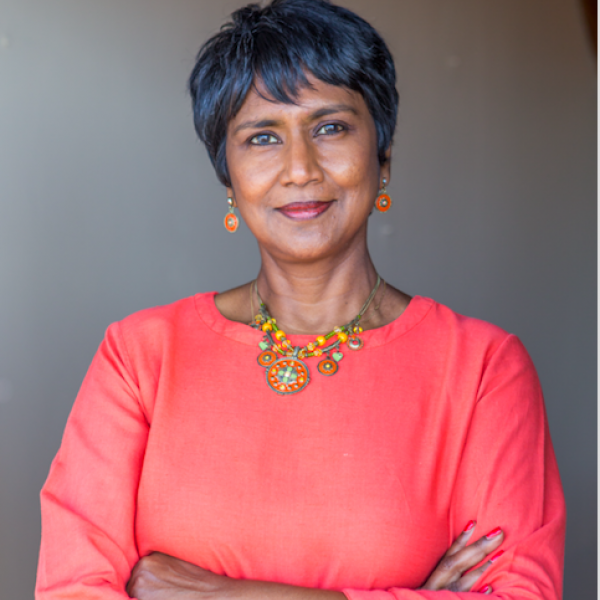 Beulah Thumbadoo is working to create a culture of reading, as part of a campaign to raise literacy levels in South Africa and help the nation educate itself.

Beulah believes that reading remains a key to national advancement and individual growth. Past efforts to combat illiteracy and aliteracy (lack of interest in reading), which affect nearly 90 percent of South Africans, have been piecemeal and ineffective. Beulah's organization, Everyone's Reading in Africa (ERA), is producing high-quality adult education products and programs, including the Book Box - a portable library of easy-to-read texts for youth and adults. It has also created an African Language Series with forty original stories in ten languages, and hosts an annual short-story competition. After a long and tireless campaign, Beulah has convinced the national Minister of Education to declare 2001 the "Year of the Reader" and to heed the call for a national strategy on reading.

South Africans are struggling to undo the educational neglect of the apartheid years, which have contributed to extremely high rates of illiteracy and aliteracy. Poor people do not have good access to reading materials, and the systematic exclusion of blacks from the benefits of education has discouraged reading. Furthermore, the inequitable distribution of library facilities (a legacy of the former regime), the urban/rural divide, the diversity of language, and the high price of books all make reading a luxury for most people, who are cut off from information that might enable them to lead better lives. Poor reading skills and habits cause young people to have difficulties in school and, later, in the workplace. Many are unable to critically analyze what is placed before them.

ERA began as Easy Reading for Adults in 1991 as a small project of the adult literacy program at the University of Witwatersrand in Johannesburg. Beulah established ERA as an independent organization in 1995 and renamed it Everyone's Reading in Africa. As coordinator of the program, she developed the Book Box to cater to different readers and has sold more than a hundred of them to corporations, prisons, citizen organizations, and community-based organizations. She has developed an African Language Series, which includes sets of stories from indigenous South African cultures written in local languages. She has also initiated a national short story competition that encourages writing and promotes reading while also building a grassroots collection of reading materials. Beulah's most ambitious program is an advocacy and lobbying campaign to convince government and other stakeholders to become involved in a national literacy and reading strategy. She organized a national conference of key stakeholders, including writers, illustrators, booksellers, publishers, library services, language specialists, government departments, and other key reading organizations in order to harness support to declare 2001 to 2010 the National Decade of Reading in South Africa.

As a result of her efforts, the Minister of Education declared 2001 the "Year of the Reader." She has developed a complex plan to engage all the stakeholders in continuous activities that will involve everybody reading in South Africa. Beulah has many ideas about activities for advancing the project, such a national Book Week with intensified programs, book fairs, and reading and writing competitions. Another idea is to establish a national Reading Hour, initially once a month but with increasing frequency over time, during which all South Africans are encouraged to stop and read something of their choosing. She has also suggested the creation of National Library Week, when libraries focus on improving and promoting their services, and Writer's Week, involving activities to encourage budding authors. Beulah was recently elected to participate in the South African Literacy Initiative, an effort sponsored by the European Union that is being organized by the well-known educator, John Samuel.

Beulah's whole life has been filled with books. She remembers a story-telling mother, a stairway in her childhood home lined with books, and days filled with reading as her most interesting pastime. Her interest in reading led her to an editorial job at a major publishing company after graduating from college. While working there, she realized that they were publishing books for a very narrow audience. She longed to do more for the majority of the population without any reading material. She left the publishing company and involved herself in the literacy arena. In her work, she discovered how difficult it is to get relevant books published and to then get them to the people who need them. These discoveries led her to develop her ideas to popularize reading and provide better access to reading materials. Beulah's youthful commitment to the aims of the Black Consciousness movement lives especially in her nurturing of reading as a cultural instrument of empowerment. She is convinced that the best education she ever undertook was to live her life and then find books that made sense of her experiences. She would like everybody to have that opportunity.