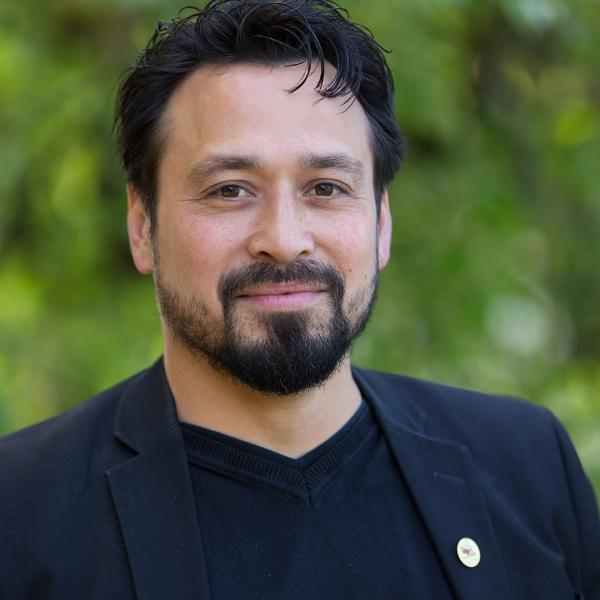 Kim is changing the way we see bees by promoting them as a core and essential resource to the environment and to human beings. He has developed an integrated bee management plan that empowers every stakeholder in the value chain to promote bee health and plant biodiversity.

Kim is redefining the role of bees in our ecosystems from honey producers to biodiversity protectors. Bees are viewed as honey producers whereas only one out of the 384 Belgian bee species produce honey. Kim is rethinking the whole model surrounding bees. Plant species are disappearing along with the bees, which currently pollinate 84% of European crop species, and this will have a direct impact on the way we eat and on the environment. Kim manages the bee population in a sustainable way so as to enable a proper management of the environment. He has reached a 5% mortality rate for the colony he handles, whereas the average Belgian beekeeper suffers from a 30% loss.

Kim repositions bees at the center of a two-fold monitoring system, in order to use them as early environmental alarms. The first step is to monitor their health and the causes of their mortality. He detects what puts them most at risk between the three mortality causes he identified, and he makes sure that biodiversity around hives will be sufficient during the entire year, and especially in winter when most colonies collapse. The second step to his approach is to take samples of the pollen collected by bees up to 700ha around a hive and analyze them in order to detect traces of over 500 different pesticides, heavy metals, and in order to evaluate the nutritive quality of plants and fruits. Both results are summed up in a dashboard, presented in the form of a radar graph, that shows the quality of a given environment and the risk zones for bee health in that same environment. On this basis, he empowers a team of teams of public authorities, companies, bee-keepers, farmers, and scientists to collectively take action at their own level for bee preservation and biodiversity.

Kim capitalizes on his vision and his actions to create a global citizen movement and raise awareness on the fact that bees are an essential resource for humans. He conducts a public campaign to raise awareness. His biggest achievements are the European BeeWeek, which unites international scientists and presents their findings at the European Parliament, and the International Day for Biodiversity that receives quality speakers from the 5 continents. This movement leans on a global scientific support, indeed Kim works closely with the academic world and he is part of various international experts groups.

Bee keepers often consider bees as a product that make them money (from the sale of their honey) and not necessarily as a manager of biodiversity. Kim recognized that transforming the role of bees in biodiversity required bee-keepers to be actors of change. Today, 99% of bee keepers are amateurs and do not have the right tools or know-how to treat their bees properly.

Misinformation leads them to blame inaccurate and easy causes, such as pesticides, for mortality in their colonies. Bee keepers often wait to treat disease in their bees until after the honey harvest season, by which time bees cannot recover before winter and the colony collapses. A mind shift is needed to ensure that bees are seen as gatekeepers to biodiversity – a central resource to environmental and human wellbeing - rather than solely honey-producers.

Local actors, such as farmers, cities, local institutions and companies do not have the right tools or know-how to preserve biodiversity nor to assess the situation. For examples, farmers often do not realize that it would be better to use pesticides at nighttime since bees do not pollinate at this time. There is a need, but also an opportunity, to place the necessary tools in the hands of local actors, and to create a plan to empower those actors to play for a role in biodiversity through the preservation of bees.

The problem also touches everyday citizens. The way citizens consume has change. Honey is still viewed as a pure and natural product; an average citizen may not understand the level of pesticides used to fight bee diseases and thus the amount of remaining pesticides in honey for human consumption. The ecosystem lacks a clear and global vision that bees and biodiversity are fully linked.

To change the way we see bees and their link to biodiversity, Kim is creating global teams of teams to tackle the three issues provoking bee mortality (pesticides, lack of biodiversity, and disease) and to raise awareness.

He starts by working closely with bee keepers in order to teach them how to better preserve bees. Since replacing a colony is expensive, Kim is able to show the benefits to bee keepers of changing their practices reduce bee deaths. He has developed an international bee loss monitoring program that has been replicated in 22 countries and showed that in Belgium alone, mortality rates rose from 17% to over 30% between 2005 and 2014. He also gives colonies to bee keepers who have suffered big losses in order to encourage them to follow his methodology of bee treatment. Kim also provides a second level of continued training to bee-keepers that integrate the most recent research. He has also trained over 100 veterinarians to the specificities of bees and their diseases.

Kim manages to position bees as the center of biodiversity issues through biodiversity preservation projects that he implements with cities and companies and in which he empowers all stakeholders to follow an integrated bee management plan. Before any project, he conducts a thorough feasibility study to determine if plants species are missing in a specific region and whether bees could be brought on site, and if so, which species and how many colonies. Through the monitoring of bee health, and thanks to the use of his environmental dashboard, Kim has a local view of a territory and can assess what needs to be done by specific actors in order to preserve biodiversity in a rural or an urban area. For instance, farmers can communicate with bee-keepers to increase the pollination of their crops, and Kim provides a platform to facilitate this communication. The BeeSpa partnership with Spadel, a mineral water company, is a striking example of a win-win collaboration. Spadel hosts 8 colonies of adequate species on its territory, and thanks to bees and the usage of Kim’s dashboard, the collaboration can assess the quality of the environment. Kim has also developed an integrated project with the Belgian city of Knokke: he created touristic circuits, ecosystemic services and a laboratory for biodiversity. He plans to pollinate 10% of Belgium by 2016; this objective equally involves bee health and biodiversity development.

Kim spreads his model from one territory another by leveraging his engaged network. He can scale his solution by working with local actors throughout Europe. He has already trained bee keepers in the South of France, and aims to extend the Spadel partnership to sites in France and Wales. He is in discussion with 5 cities, including Antwerp, to replicate the Knokke project. He is at the same time preparing to submit BeeOdiversity to the European-financed projects, LIFE and INTERREG, which could be influential in BeeOdiversity’s trajectory. He has also put in motion a strategy to develop global public awareness, and to involve institutions in his process. Most scientists often have trouble transmitting their ideas, which is why Kim makes the effort to communicate in an intelligible way to all types of audiences.

Kim was directly influenced by his grandparents who owned an organic chicken farm. He recalls the numerous chickens that were burned during the avian flu and how his grandparents were spared thanks to their sustainable practices. In addition, he has always been passionate about animals and especially insects. He is the only person to have conducted a thesis on bee mortality in Belgium and he has worked for fifteen years on the subject. He was once offered a large amount of money to launch a bee selling company, as he had figured out how to best keep them alive. He declined this offer and chose to work more closely to biodiversity and sustainability issues.

In order to be successful in his venture, Kim decided to obtain a MBA from the Solvay Business School to gain business skills and to expand his network. Throughout the years he also had to develop the communication skills required to popularize his message.

Kim knows how to strategically choose his partners. Internally, he has surrounded himself with complementary profiles, such as people with competencies in law, sales and territorial engineering to help him develop the company. On the external side he is very careful about whom he works for. Indeed, he only works with companies that have either an interest in preserving their environment or who already have strong CSR background. He does not either hesitate to refuse to implant bees into an environment if he thinks that there is not sufficient biodiversity to preserve them. He will, however, advise to replant in a smart way and accept to reconsider once it is done.