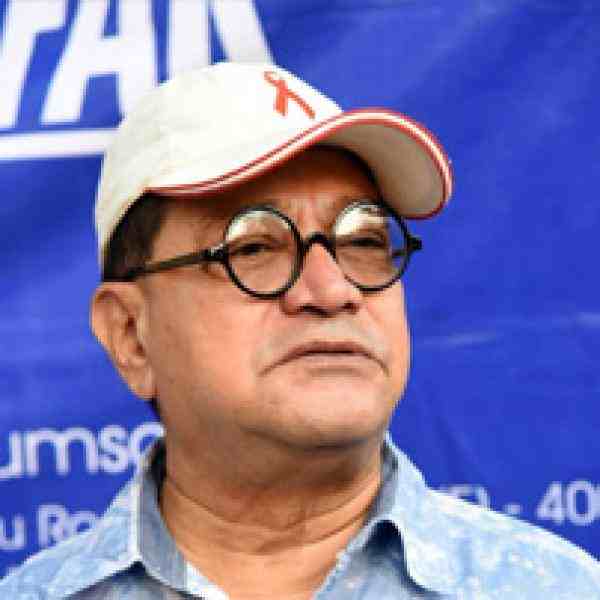 Ashok Row Kavi is providing a formal platform for gays and lesbians&#150;a group left out of mainstream life in socially conservative India&#150;to claim their place in political and social arenas. Ashok encourages gays and lesbians to become proactively involved in public life and institutions through media, advocacy, cooperation and community-building.

Ashok Row Kavi is attempting to increase the status and security for homosexuals within Indian society. He is uniting this marginalized group of people into an organized and vocal community with a common identity, and organizing it to bring pressure on political and social forces in the country. Ashok empowers and strengthens the gay community through initiatives such as social gatherings, outreach programs, counseling and legal education. Drawing upon his journalism background, Ashok uses the print media to communicate with and dispense information to gays and lesbians. His magazine, "Bombay Dost," is the first legally registered publication to focus exclusively on the issues that confront gays, lesbians and bisexuals and is one of the few resources in India for homosexual AIDS education.After he has strengthened gay and lesbian community identity, Ashok will motivate them to target and take action on specific issues. The first advocacy initiative will build pressure for the decriminalization of homosexuality. Ashok will also encourage the groups to promote and design AIDS prevention and safe sex campaigns.

The gay and lesbian community in India is marginalized to the point of becoming virtually invisible. Discussion of sexuality is considered an inappropriate topic for public discussion and debate. Consequently, despite their significant numbers in Indian society, the needs and concerns of gays and lesbians are ignored in the national political arena and in community planning processes. Most gays and lesbians are isolated and often ignorant of the fact that they are not alone. There are few public forums in which they can gather to seek the support of one another or share their experiences, feelings and questions with others. Moreover, because the Indian Penal Code designates homosexuality as a crime, they are discouraged from being open or seeking out others like themselves.

Ashok's two-part strategy is effective and simple. First, through a controversial and path-breaking magazine, he builds self-esteem and a sense of community among Indian homosexuals. Then, upon this foundation, he initiates AIDS education and political actions designed to save lives and create wide public acceptance of homosexuality.His successful magazine, "Bombay Dost," provides India's homosexuals, both men and women, with a visibility they have not had before and has provided a platform for interaction among supporters for the gay community. The frankness and scope of the articles build homosexual self-awareness. In the magazine, Ashok builds understanding and a consensus on issues&#150;such as the legal rights of homosexuals and the worldwide trend to decriminalize homosexuality among consenting adults&#150;that can be the focus of follow up advocacy and collective actions. "Bombay Dost" has also helped to create visible gay support groups and networks in many of India's major cities including Delhi, Lucknow, Calcutta, Hyderabad, Bangalore and Madras. Through his networking with gay businessmen throughout the country, Ashok has built a strong financial support mechanism for "Bombay Dost." Ashok has developed nationwide outreach programs for homosexuals on safer sex and sexual orientation and has instituted a gay documentation center. The program utilizes conventional vehicles such as publications and workshops, but also boasts India's first voice mail helpline. The high response rate of 70 to 80 callers per day, some of which are abusive, are handled by support groups. Another program uses "drop-cards" that are distributed near colleges, parks and other homosexual gathering places. One side of the card has information on services and helpline facilities, and the other side lists safe sex practices. The success of his campaign has led to the creation of a center for counseling supported by the Mumbai municipal government. In addition, several local and national nongovernmental organizations and international agencies have visited the outreach programs to learn how to communicate and create communication channels. In addition, Ashok has been asked to serve as key consultant on AIDS for the Mumbai Municipal Corporation. Based on these initial achievements, "Bombay Dost" is now breaking even and is shortly expected to generate profits. The full set of Ashok's programs is slowly progressing toward self-sufficiency with a number of the people contributing a percentage of their monthly or annual income.

Ashok , an engineering graduate, has had a long and successful career in journalism working for many of the leading newspapers and publishing houses in the country. Ashok's early difficulty dealing with his sexuality led him to enroll as a monk in the Ramakrishna mission. Fortunately, a monk counselor at the monastery helped Ashok accept his identity and encouraged him to help other homosexuals come to terms with their sexuality.