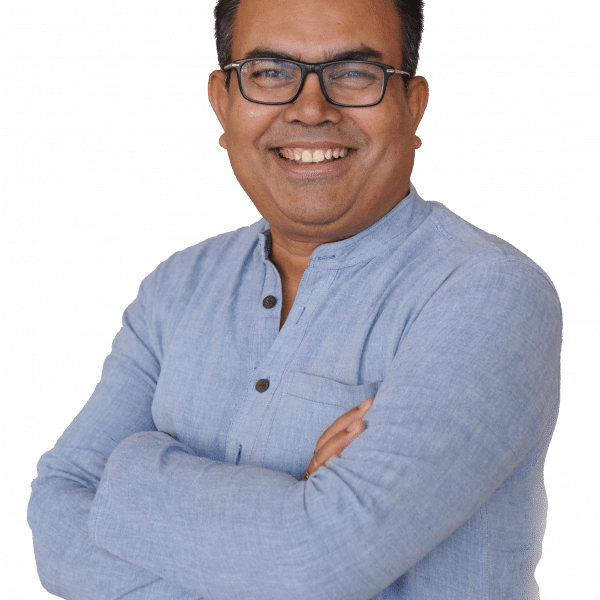 Secure access to markets can bring many of the world’s informal workers out of poverty. Arbind Singh gives urban poor access to markets through large people-owned and managed institutions—large enough to influence policy and be legitimate competitors in a globalizing market. By initiating worker cooperatives like the National Alliance of Street Vendors, Arbind has created a bridge for the hitherto unorganized poor to access financial services and technology and solicit business.

As India’s informal sector continues to grow, Arbind’s organization, Nidan (the Hindi word for ‘solution’) works to capitalize on the sector’s strength in numbers, using large people-owned and managed institutions to influence policy and market dynamics. Long overlooked by the government and with few prospects of improving their basic living conditions, informal workers are now securing economic and social inclusion, and emerging as legitimate competitors in India’s market economy. By introducing multi-tiered worker cooperatives, Arbind has created a bridge for the hitherto unorganized poor to solicit business and to negotiate services and roles in the mainstream economy.
Nidan now promotes sixteen cooperatives in all, including the National Association of Street Vendors of India (NASVI), a member-based organization now active in twenty states, as well as enterprises of ragpickers, jute pickers, craftspersons, home-based workers, rice growers, and the like. Its other cooperatives range from those geared exclusively for traditional midwives and other women’s groups, to large-scale housing cooperatives, designed to attract builders’ interests. The workers own and sell shares in the cooperatives, and remain at the forefront of all negotiations and decision-making.
Realizing that the poor need access to services in order to sell their products, Arbind has additionally negotiated partnerships with a popular marketing company and various service providers, including a nationalized insurance company whose tailor-made package of health and asset insurance now reaches more than 10,000 urban workers.
While companies were initially hesitant to service the poor, Arbind has convinced them that negotiating with large volumes of workers can indeed be a sound business decision. Today, his worker-led programs for collective enterprises among the urban poor have expanded the sector’s access to credit, housing, and social security benefits, and led to the formation of 1,800 self-help groups, affecting more than 50,000 families country-wide. Arbind is proving the transformative power of collective action, encouraging workers from a variety of social and religious backgrounds to come together as strategic competitors in today’s modern markets.

In India’s urban areas, 23.6 percent of the population lives below the poverty line and 14.1 percent live in slums. According to a UN-Habitat projection, the number of urban poor, currently nearly 90 million people, is likely to more than double by 2020, reaching an estimated 200 million. In most Indian cities, these individuals survive by working in the informal sector as home-based workers, vendors, manual laborers, and service providers who together make up 93 percent of India’s total workforce. Driven out of their communities by poverty and a lack of gainful employment, the urban poor often lack the skills and education needed to attain higher paying jobs in the organized sector.

Despite the need to bring this huge population within the fold of India’s economic and social growth, recent government interventions have worsened the problem leading to an increase in India’s informal workforce. In 2006, the Prime Minister launched the “urban reform agenda,” a program designed to attract private investment to 63 of India’s largest and most important cities and 28 of the smaller ones. The infusion of private capital has produced a decline in the formal workforce, as entering multinationals and factory-oriented corporations overpower smaller businesses.

As a result, today’s informal workforce remains disorganized and deeply segmented, having been long overlooked as potential contributors in the liberalized economy. Lacking access to financial services, workers in the informal sector have few opportunities to engage in sustainable business practices. Though microfinance is widely viewed as a panacea, microlending institutions often bypass the urban poor due in part to its transient nature. Traditional group-lending models, wherein friendship and community membership essentially substitute for collateral, are furthermore seen as at odds with the urban poor. As a result, the sector’s lack of financial resources, coupled with its lack of organization and political representation, has effectively denied its workers a voice in India’s political and economic emergence.

Arbind launched his program in 1995 in Patna, the capital of Bihar, a state known since Independence for its political misrule and widespread social ills. As a result, Nidan initially focused on changing government policy and promoting the legal rights of the informal workforce. Early on, following a successful push for valid licensing for city vendors, Arbind developed a model for the large-scale organization of the informal sector as a way to combat the forces of India’s new emergent economy. Nidan’s worker-driven campaigns have since led to the elimination of municipal tax collectors in favor of vendors’ committees, defined hawking zones and the participation of workers’ representatives in government policy-making. Recognizing the power of the collective, workers have consequently acquired a growing appetite to further organize themselves, abandoning their formerly piecemeal negotiations.

In order for the workers to capitalize on Nidan’s legal successes, Arbind has increasingly worked to bridge the chasm between the unorganized and organized sectors, arming them with the marketing and organizational skills needed to compete in the global economy. Nidan offers numerous capacity-building programs to each of its worker-based enterprises, including financial and other technical trainings. Examples include a program on the efficient management of waste and compost making for the waste pickers’ cooperative and further provisions to equip them with modern resources like garbage trucks and teach them how to bid for new contracts. Appropriate trainings, combined with consistent and factual information on markets, have served to enhance informal workers’ capacity to compete with new emerging markets. Arbind further arranged a partnership with Angana, a marketing enterprise that promotes cooperative products. Having teamed up with other cooperatives in different states, Angana now acts as a brand for workers’ products countrywide.

The success of these emerging enterprises is owed in large part to Nidan’s efforts to secure financial and social support for informal sector workers. By linking its 1,800 self-help groups to banks, Nidan has enhanced venders’ access to credit, enabling hawkers and other groups to buy goods in bulk. Nidan is in the process of setting up a separate microfinance company with 10,000 member-shareholders, and has already established multiple health insurance schemes, in which beneficiaries can access hospital services through personal identity cards. Other support services include loan schemes available for emergencies, funerals, and other purposes.

In 2004, the waste pickers’ company, Swacchdhara, successfully competed at market rates to secure a contract from the Bihar Municipal Corporation. Granting Swacchdhara the rights to implement its urban solid waste management project, it marked the first government contract of its kind, and paved the way for similar contracts between other government municipalities and the National Alliance for Street Vendors. Nidan’s activities continue to expand at relentless pace. Its current efforts include the creation of child-labor free zones; the launch of several public health campaigns; and the development of the wastepickers’ collectives along the lines of NASVI. Nidan now also issues user-friendly training manuals in a pictorial format, designed to serve a largely illiterate population.

Arbind’s main strategy for organized institution building has centered on creating an atmosphere of empathy, in which all workers in the sector are encouraged to view their issues as the same. To foster trust and participation in the movement, Arbind relies on word-of-mouth communication and community leadership to fuel growth in various fields.

The success of both the vendor association and the Dalit-dominated waste pickers’ contract, secured without a single bribe, has bolstered the public’s confidence in the power of transparency and collective action. Comprised of people from diverse religious and social groups, the cooperatives are also effectively breaking down caste barriers in a society long fragmented by fundamentalist beliefs. With eleven offices covering almost the whole of Bihar, Nidan is building its presence in five other large districts, and hopes to ultimately be active across the country.

Arbind spent his early years in northeastern Bihar, a hub of first generation migrants who traveled to the area in search of work. As a child, he was alarmed at the eviction of neighborhood vendors for what to him seemed no fault or crime. Exposed to social work while studying at a missionary school, he later served as a student leader in Delhi. There, he actively participated in drought relief work and played a key role in setting up a youth-led communal harmony program in a particularly volatile area outside the city.

After studying law post-graduation, he felt an innate responsibility to return to his local community, and to work to correct the wrongs he had grown-up watching. Upon returning to Bihar, Arbind discovered a severe lack of social services available for the urban poor, as most social service organizations found them too complex and politically unstable, preferring instead to focus on improving conditions in rural areas. Following an anti-encroachment drive targeting poor vendors by the Bihari government, Arbind launched Nidan as its own entity in 1996.

Arbind lives in Patna with his wife and two children.