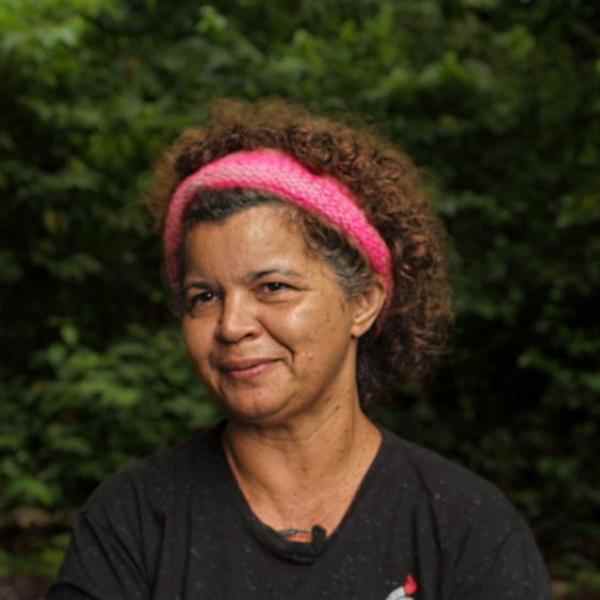 Angela is leading a national movement for the defense of traditional people and the environment in Brazil. She has launched a new Alliance of the Peoples of the Forest and has created a series of initiatives to foment a new generation of environmental leaders in the conservation units of Brazil.

Angela is leading a national movement to defend the environment, the conservation units and the diverse traditional populations that inhabit them, from indigenous communities to extractive, riverside and quilombola communities. She is creating a series of strategies, from the Young Protagonists of Resex Chico Mendes initiative to the articulation of the Alliance of Peoples of the Forest to this end. Angela is shifting mindsets and creating a culture of changemaking among the extractive youth and by promoting youth leadership and the occupation and the development of conservation units, Angela is fomenting the extractive production systems and protecting the culture and ways of living of this community, preserving the territory from illegal and destructive practices to the environment. She proposes a new paradigm, bringing youth to the center of conservation and breaking a predatory dynamic of land use heavily based on the livestock industry and agribusiness.

Angela was part of the founding group of the Chico Mendes Comitte back in 1989 and as new challenges arises, Angela proposes new strategies to ensure a better quality of life for extractive populations and to guarantee the occupation and defense of the territory where they live. Since 2015, Angela has created a series of initiatives to strengthen the identity and self-esteem of young extractivists, to value their knowledge, culture, and ways of living and production, thus contributing to the permanence of these young people as environmental defenders of their territories. Based on a training methodology co-created with young extractivists, Angela is fomenting a new generation of leaders for the defense of the environment and access to rights, starting with the young extractivists from the Extractive Reserve (Resex) Chico Mendes, in Acre, and plans on expanding its operations to other conservation units across the Amazon.

Since 2019, together with indigenous leaders Raoni Metuktire and Sonia Guajajara, Angela has been at the head of the launch of the new Alliance of the Peoples of the Forest, a strategy of peaceful resistance created by Chico Mendes and indigenous leaders that for many years was demobilized. Angela has promoted a big strategy shift for the Alliance to be able to face current challenges of the defense of the environment and the lives and culture of traditional peoples of the Amazon that focuses on protecting traditional communities, dialoguing with the bases of the most diverse communities and including groups that were not part of the alliance before that are extremely relevant for the protection of the environment and sustainable development of the region. The new format of the Alliance also includes quilombola, riverside communities and family farmers of the MST movement (Landless Workers Movement), and biomes beyond the Amazon, further expanding territories and scope of action.

According to the National Institute for Space Research (INPE), in 2019 the deforestation of the Chico Mendes Extractive Reserve increased 203%, a record both in percentage and in area destroyed since its foundation in 1990. The area of deforestation - 74.5 square miles - is the largest loss recorded by the Prodes monitoring system (Inpe), which began in 2008. As a whole, the unit has already lost 7.5% of its forest cover. The area remains unprotected after a measure implemented by the Ministry of the Environment that suspended protective measures by ICMBio, the institute that is responsible for the management and inspection of Brazilian Conservation Units that bears the name of the environmentalist, leader, and Ashoka Fellow, Chico Mendes. The argument used by those who are against the existence of Conservation Units is that they hinder the country's development, a discourse that has also been learned and reproduced among the youth of Resex Chico Mendes, even if on a smaller scale.

According to data from IPAM, the Amazon Research Institute, 25.5 million people between traditional populations and families live in the Brazilian Amazon region. The extraction of non-wood products (oils, resins, herbs, fruits, and rubber) contributes economically to the lives of 400 thousand families. With the progressive dismantling of social and environmental public policies and the cut in investments in agroextractive production chains, as happened with rubber in the state of Acre, and, more recently, the threat to the Amazon Fund, many extractivists and rubber tappers feel pressured to change their ways of producing and living. The older ones are pressured to find faster ways of subsistence and the younger ones see cattle production as a more profitable, alternative income generation. The pressure of agribusiness and the dismantling of social an environmental protective policy for traditional communities imposes the same economic and land use dynamics that has led to the degradation of other Brazilian biomes and the extermination of several indigenous groups.

Today, young people represent 52% of the population of Resex Chico Mendes. They live in a reality in where access to basic rights, such as quality education, internet access and public security is neglected, which has contributed to the migration of young people from the Reserve. Young people seek economic perspectives, access to technical and higher education and new technologies. All these factors combined are leading to a population decrease and in turn produces even greater pressure on the territory threatened by invasions and deforestation for cattle raising. Thus, the illegal advance of pasture in the forest has been growing rapidly in recent years.

Angela is at the forefront of the launch of the new Alliance of Peoples of the Forest with indigenous leaders Raoni Metuktire and Sonia Guajajara, to join forces and coordinate the mobilization of traditional communities living in the Amazon. To adapt to new realities and challenges, Angela has shifted the goal of the movement as well as renewed strategies around who she brings into the movement. While in the past, the struggle was for the recognition and demarcation of territories as a conservation unit, today, the struggle is to preserve the conservation units and prevent setbacks, such as invasions and illegal deforestation, and the dismantling of environmental policies, which are being proposed by politicians at the National Congress. In this new model, Angela also integrates new actors including quilombo communities, riverside dwellers, and family farmers of the Movimento dos Sem Terra (Landless Workers Movement), who were not part of the Alliance before. Angela led the creation of a Journey for the Alliance in December 2019 and held a meeting with indigenous leaders for the launch of the new Alliance in January 2020, in the Capoto-Jarina Indigenous Land, in Mato Grosso. The meeting had more than 500 indigenous leaders as well as leaders that participated in the movement of the 1980s.

Angela was part of the founding group of the Chico Mendes Committee created in 1989 with the goal of 1) demand that the police and judicial authorities investigate, judge and convict those involved in Chico Mendes’s murder and 2) publicize nationally and internationally the ideals and legacy of Chico Mendes's struggle. In 2009, Angela took over the leadership of the Chico Mendes Committee, working mainly with initiatives to raise environmental awareness and preserve the legacy of the rubber tappers' struggle. In 2015, she founded the Youth Center inside the Chico Mendes Committee and created the Young Protagonists of Resex Chico Mendes to train young extractive leaders to be conscious of their history and their potential to create change implemented in partnership with the National Council of Extractive Populations (CNS), Amazon Workers Center (CTA) and the Pro-Indio Commission. Angela brought about a major change in the Committee’s goal from justice for her father to bringing youth to the center of conservation.

To strengthen young leaders within the conservation units, Angela first founded the Youth Center within the Chico Mendes Committee, composed of young people engaged in carrying out Chico Mendes' ideals and concern for the future of the planet. The youth of this Center work with mobilization, awareness, and environmental education carrying out cultural activities in the city, commemorative events, demonstrations, and activities in municipal schools in Xapuri and Rio Branco. With this team of young people, in partnership with the National Council of Extractive Populations, young people from CTA and Resex Residents Associations, Angela designed the Young Protagonists initiative, which focuses on young residents of Resex Chico Mendes promoting critical thinking among young leaders within the Conservation Units, as a way of strengthening social organizations, traditional knowledge and valuing young people’s voices, their territories, and ways of production and lifestyles. The 8 modules of the program take place in different rubber plantations, in which young people are camped for a few days to carry out the course. In this way, young people create connections with the communities in different Resex locations.

After her father's death, several of his friends and colleagues approached Angela, who then started working at the Amazon Workers Center (CTA), an organization co-founded by Chico Mendes that works with community-based forest management for multiple uses, which had a great participation in the formulation of Extractive Reserves and Agroextractive Settlement Projects (PAE), guaranteeing to the communities that lived there. At the same time, Angela was part of the founding group of the Chico Mendes Committee, created to demand that the police and judicial authorities investigate, judge and convict those involved in her father's murder and to publicize nationally and internationally the ideals and legacy of Chico Mendes's struggle. From her work at CTA and the Chico Mendes Committee, which were at the same headquarters, Angela began to learn more and more about her father's history, the struggle of rubber tappers and traditional peoples and the reality and challenges of local communities.

In 2009, Angela took over the leadership of the Chico Mendes Committee, working mainly with initiatives to raise environmental awareness and preserve the legacy of the rubber tappers' struggle, at the time supported by the Acre Secretariat for the Environment. Years later, Angela was elected Director of the Secretariat of Women of the National Council of Extractive Populations (CNS), in which she proposed and negotiated with the Ministry of the Environment for the resumption of the project Bagagem das Mulheres da Floresta, aimed at the reproductive health of women of traditional communities. She then began to perceive a change in the scenario over the years: the conflicts over land that seemed to be pacified still occurred, and young people participated more and more actively in the Committee's activities, exposing their opinions and the challenges they faced.

In 2015, based on her contact with young people, Resex Residents' Associations, and her trajectory in the movement, Angela identified the problem of youth exodus and the growing number of invasions, subdivisions and divisions within Resex Chico Mendes, caused by the lack of investment in the extractive production chains and public policies for the territory as a whole, but also by the erasure of the memory of the history of struggle of the extractive communities. Knowing these difficulties and nuances, Angela founded the Youth Center within the Chico Mendes Committee and initiated the co-creation of Young Protagonists of Resex, in partnership with CNS, CTA and the Pro-Indio Commission, to train young extractive leaders to be conscious of their history and their potential to create change.