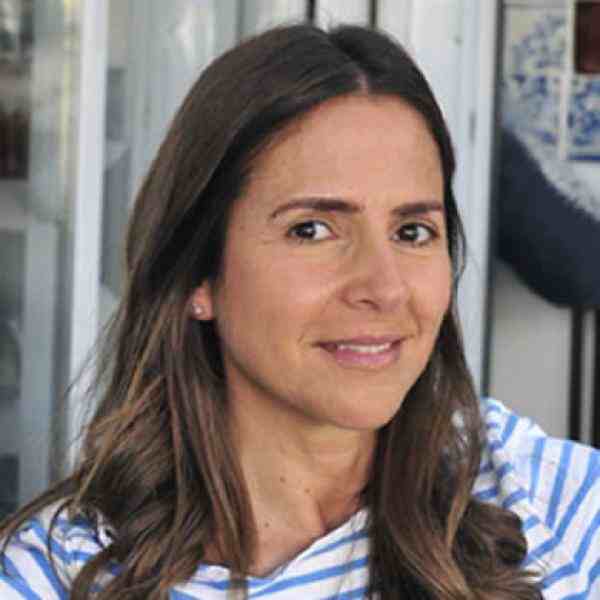 Through an intergenerational support model, Alexandra is selecting young women with big changemaking potential and equipping them with the tools, mentorship, and networks needed to become leaders in their fields. Also, by having them serve as role models and mentors of younger girls from primary school, she is creating a social vaccine that prevents early marriage and child pregnancy, thus opening more pathways to these girls to actively participate in their education and furthermore in society.

Alexandra dreams of a world in which every single girl knows she has a say in her life and a role to play in society. Alexandra is devoting her efforts to ensure the end of child marriage and pregnancy in the world’s developing countries, guaranteeing every woman has a chance at graduating and working on her dream job, but also at becoming a changemaker herself. Alexandra’s Girl MOVE is making it happen through a structured, continuous and inspiring one-year programme on Leadership and Social Entrepreneurship centered on today’s young women, who will be the mothers and leaders of tomorrow.

Cascade mentorship focused on a cultural and systemic change
Girl MOVE cascade methodology provides an holistic solution to this cyclic problem. The cascade starts on reference leaders who provide mentorship to young graduates (Girl MOVERS) that, in turn, spend 35% of their training as mentors to young 7th grade girls (Mwarusi), helping them keep focus on their future. This way the programme brings inspiration to reference leaders, whom often convert the mentorship into professional opportunities for Girl MOVERS, while getting them in touch with social problems they may help solving in a near future. The Mwarusi girls, having good and reachable role models to follow, stay in school hoping to graduate and learn how to manage their community’s pressure to get married and have children at a young age. These changes have a multiplying effect on society. They create a cycle where young girls become educated women, often mothers, active citizens and confident professionals. Such women will become the greatest asset for a community to break a poverty cycle.

Empowerment of a new generation of women leaders
Girl MOVE’s programme was designed to enable young graduates to gain a grip at their own life and convert their confidence into the service of others, thus aiming at solving their countries social problems. As leaders of a new generation of women, Girl MOVERS within the programme are thought (1) to develop self knowledge and realize realize their own potential, (2) to understand servant leadership, management and communication principles and (3) to glue their confidence and team leadership abilities with purpose, vision and technical skills that will enable them to become full-stack changemakers.

Lean and modular solution, leveraged on existing resources, and ready to be replicated
Girl MOVE focuses on connecting girls and women from different backgrounds, leveraging existing resources, knowledge and experience and promoting it’s interchange, thus empowering both mentors and mentees. The simplicity and effectiveness of the methodology has yet another advantage: modularity, which allows the programme to be replicated either as a cascade or in separate modules (e.g. Mwarusi <-> Girl MOVERS // Girl MOVERS <-> Reference Leaders). These characteristics make Girl MOVE easily scalable and adaptable to integrate public and private education initiatives, from national education systems to youth empowerment organizations, solutions Alexandra already has in mind.

Mozambique is the 4th poorest country in the world and the country in the world with the highest rate
(70%) of young women aged 20 to 24 years that have already had three or more children. There, nealry
50% of women had their first child before turning 18 years old. Only 24% of Mozambican girls attending
the 7th grade move on to the 8th grade, as they have to drop out from their studies due to arranged
marriage and pregnancy.

These girls are following the example of their mothers and grandmothers, and the expectations of their
community, where the cultural norm is for women to bear the primary duty of raising a family. However,
dropping out from school keeps them from having a balanced working life in the future and makes them
extraordinarily vulnerable to HIV, sexual violence and physical exploitation.

The few (around 1%) young women who manage to graduate from university are hired to under-qualified
jobs. Many of them are strongly motivated to change the system, especially regarding gender inequality
(they experienced it closely by being sexually harassed by their teachers and judged by their communities
along their academic path). However, they are most of the times unprepared both in terms of skills and in
terms of the a comprehensive knowledge of their country’s reality.

The broader result is a country that wastes 50% of its talent and chances of development. The root cause
for this problem is an inherent culture that sees girls only as potential mothers and wives. This mindset is
perpetuated by society’s female role models and indifferent (male) leaders and becomes ingrained within
women themselves, hindering their confidence, dreams and changemaking drive.

On a yearly basis, she identifies talented female university graduates through a selection process (last year
there were +700 applications). The 30 top candidates become Girl Movers and are offered a one-year
scholarship for a post-grad program on entrepreneurship and service leadership, which is composed of:

(1) 20 weekly hours (900h / year) of theoretical-practical training. The subjects are divided into (a)
Personal Leadership, (b) Leadership with Others and (c) World Transformation, given by top
national and international trainers and experts.

(2) 20 weekly hours (600h / year) of serving leadership work in the poorest neighbourhoods of
Nampula, Beira and Maputo. Each “Girl Mover” is responsible to (a) provide coaching to 3
current female university students - whom may become future Girl Movers themselves - (b)
mentor 30 twelve-year old girls, supporting and motivating them to pursue their studies,
monitoring their wellbeing and safety, working with the surrounding community (e.g. visits to
parents) and taking action to prevent and solve critical incidents (e.g. pregnancy, marriage, school
drop-out, abuse) and (c) organize 2 weekly sessions for their young mentees covering the
following contents: I protect Myself, I protect My Body, I protect my Studies, I protect My
Money.

(3) 2-month internship program in Portugal, in which they spend half of their time in a company that
matches their career prospects and the other half in non-profit organizations where they learn
about how to create and manage a project with social and environmental impact. They also attend
a 3-day Executive Education Program on leading global trends in Leadership and
Entrepreneurship, in partnership with Catholic University Lisbon Business School.

(4) Mentorship by female business women, both in Mozambique during the program and in Portugal
during internships, who help them designing their professional career paths and provide networks
and opportunities.

So far, the 64 Girl Movers who have completed this program have mentored 2400 young 12-year old girls
from vulnerable contexts, becoming their new inspiring role models and empowering them to have a say
in their life and career . The short-term outcomes from the mentorship component of the academy are
unprecedented: 80% of the mentees transition to secondary school (against 24% nationwide) and show a
0% pregnancy rate (against 39% nationwide). The areas where Girl Move is intervening are the poorest
regions in Mozambique, comparing its results to national average is an understatement of its impact.

On the mid to long-term perspective, the academy provides Girl Movers with leadership skills such as
teamwork, public speaking and conflict resolution. They also develop a deep first-hand understanding of
their country’s most pressing systemic problems and nurture a strong drive and confidence to create
change, as they spend part of the program working on the field with vulnerable communities, in which
they nurture strong bonds with the young girls they are mentoring and protecting. These young women
leave the program with an impactful career plan, co-designed with the guidance of reference leaders and
the support of partnering companies which provide additional professional opportunities. The results of
this programming have yielded an 80% employability rate, with Girl Movers achieving higher entry-level
positions than their graduation peers.

Alexandra is currently accelerating and scaling this impact by openly sharing all Girl Move’s methods
and tools. With the support of Population Council, she is providing supervision and technical support to
girl empowerment programs in Africa while also gathering a national group of 57 Mozambican
organisations, to share best practices and receive Girl Move’s training on how to replicate its innovative
mentorship model. Two of these replications are being led by alumni of the academy (former Girl
Movers) who were hired by the organizations.

Alexandra envisions a widespread mentorship model set up within the education system in developing
countries that provide a “social vaccine” to 12 year-old girls, to protect them from the dangers of early
school drop-out, forced marriage and child pregnancy. For that, she is already contributing to the
redefinition of the Gender Policy by counseling Mozambique Government.

She also envisions a new generation of female changemaking leaders and role models not only in
Mozambique, but across Africa. In 10 years time she aims to have in Mozambique 300 judges, doctors,
CEO’s and all other kind of decision makers who have started at Girl Move Academy and will shape a
new country, and the idea is to expand Girl Move to all Portuguese language speaking countries as well.

Alexandra Machado was born into a family with deep Catholic and solidarity values. Throughout high
school and university she was a dedicated student, known by her teachers and colleagues as “the problem
solver”, as she always developed creative solutions to everyday challenges. During this period Alexandra
realised she loved to learn and teach, so she developed a routine of helping her friends out with their
studies and eventually ended up working as an assistant teacher in her Business Management Bsc degree,
at Portuguese Catholic University.

After graduating, Alexandra went through 25 years of corporate business experience, taking leading
positions in strategy and marketing, while working in industries such as retail, car, telecom and sports.

From 2003 to 2012, Alexandra was Nike’s Country Manager in Portugal and a Member of the Board of
Nike Iberia, where, the always-present changemaker mindset, got her involved in the Girl Effect
Movement, from Nike Foundation. Throughout her successful career, Alexandra has been a strong
advocate of women stepping up and assuming leadership positions as society’s changemakers.

In 2012, she started dedicating extra-hours researching about the power of women leading change in
developing countries. In the same year, Alexandra took a life-changing journey to Mozambique, where
she became passionate about the country and clearly saw women’s potential to improve it. She came to
the conclusion that poverty in the world is tremendously related with the barriers around girl’s access to
education, to women not having a voice in overall society issues and not assuming leadership positions.

Considering her background and connections, she felt she could be the social entrepreneur tackling this
problem in an innovative way, and so she went for it and stepped out of Nike, dedicating herself entirely
to Girl Move.