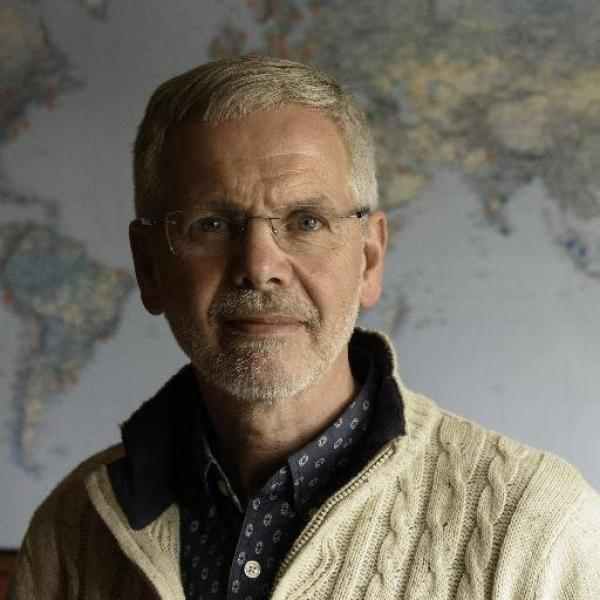 Rapid globalization from the 1970s saw a rise in trade agreements and international financial transactions. But the legal infrastructure then in place had been designed largely by nation-states, not international regulatory bodies. The finer points of regulation and taxation in this new context were left largely to those who had brokered agreements. Lack of independent oversight created space for corruption and tax evasion, and by the early 2000s, an estimated US$ 8 trillion was sitting in offshore tax havens. John is responsible for designing an international network of tax justice professionals that ‘changed the weather’ on systemic tax avoidance.

John founded the Tax Justice Network (TJN) in 2003 to increase transparency and accountability in one of our most foundational structures: the global tax system. His commitment to tackling tax avoidance for more than 20 years has empowered journalists to expand popular understanding of the issue and compelled both governments and regulatory organizations to change the rules by which international finance operates. As a result of John’s work, greater transparency in transactions and reporting has become a new global standard - saving potentially billions of dollars from being channeled illegitimately into private hands when they could otherwise go to strengthening societies.

Having learned about tax injustice and its effects on everyday people while working for both a multinational and the Jersey (UK) government in the 1990s, John was the driving force behind the founding of TJN. He led on the design of a new framework for holding multinationals, wealthy individuals and their banks to account. This strategy includes several tactics such as training investigative journalists, publishing research on tax injustice and its contribution to the global wealth divide, and weaving international dialogue between regulatory bodies, government officials and tax justice activists. TJN is not the source of these solutions per se. Instead, John has designed processes through which knowledge about tax injustice is cultivated and then shared across professional networks and in the public sphere so that action may be taken. This approach, which John terms ‘let 1,000 flowers bloom’, informed the founding of Tax Inspectors Without Borders, a body managed jointly by the OECD and UNDP. Another milestone was the OECD’s adoption of TJN’s tax-avoidance metrics to inform its own tax audit policies.

Having impacted the world’s most powerful governments and institutions, today John focuses on making his work ever more relevant to ordinary citizens, empowering people through knowledge and using storytelling as a tool. He is chronicling how excessive financialisation has impacted the lives of ordinary people, including farmers in the USA, care providers in Europe, and impoverished workers in Bermuda. This will culminate in production of a documentary film entitled ‘The Finance Curse’, which will add depth and nuance to our collective understanding of why tax justice matters.

When the most recent wave of globalization began in the late 1970s, the rules in place were not equipped to manage the uptick in trade and international financial transactions. Regulation was largely nation-state-based, but increasingly, money exchanges were global. This lack of statutory infrastructure and oversight meant existing rules were effectively obsolete and easily ignored. Enter a criminogenic financial system steeped in corruption, opacity and tax avoidance – all of which would compound issues of wealth disparity, inequality and, for too many, extreme poverty.

In the 1980s and 1990s, international tax matters were essentially left to those who negotiated trade deals and international tax agreements. This enabled wealthy individuals and multinational corporations to avoid paying the taxes and stash the money away in tax havens. The lack of statutory infrastructure also enabled governments in rapidly developing tax havens such as Jersey (UK) to pass laws that made international financial transactions even more opaque. International regulatory bodies such as the World Bank, IMF, and OECD failed to accelerate a coordinated response.

Due to a lack of public awareness, neither media scrutiny nor public debate were in supply to ensure accountability and transparency in international financial transactions. Tax injustice in this context just wasn’t on that many radar screens. Furthermore, there was no automatic transfer of information between countries about international financial transactions. Insufficient communication between banking institutions and tax authorities meant that a resident living in Country A could have a great deal of money holed up in a bank domiciled in Country B and not have it taxed by Country A.

Before TJN was founded in 2003, tax justice issues had no distinguishable public profile - either in global policy circles or public consciousness. But that was not because tax avoidance was unusual. From the 1990s, large banks had started to shift their high net worth clients’ wealth offshore - to the tune of US$ 8 trillion. The legal framework had failed to catch up with the problem, and far too many were turning a blind eye. John and his colleagues grounded their new Network in standards that would right this wrong.

John’s original strategy focused on the introduction and mainstreaming of three new standards, namely the ‘ABC of tax transparency’: first, an automatic information exchange about financial transactions between jurisdictions; second, beneficial ownership registers to identify who, exactly, owns companies and trusts; and third, country-by-country reporting to ensure that multinationals do not shift profits artificially to low-tax jurisdictions.

TJN has worked since to convince national and international entities to adopt these three standards. It engages in research and publishes peer-reviewed findings. It also convenes an annual conference so that leading tax justice activists from the media, academia, civil sector organizations, financial services, governments and NGOs can engage in open-minded debate and generate proposals to inform and shape tax justice initiatives on an international scale. This forces evidence-driven policy initiatives into the public space, which adds depth to public consciousness and encourages political action. The 18th such international conference will be held in 2020.

The second strand of John’s strategy lies in mobilizing actors from multiple sectors to build an international network of tax justice advocates. John is responsible for introducing tax justice issues to many who would eventually help him found the network. And it is his skill at motivating others to act that has ensured the network’s growth and global impact. Initial work supporting Oxfam’s 2000 report on tax evasion1 provided John an early opportunity to promote greater understanding of tax injustice and why it matters. He personally recruited some of today’s most outspoken advocates for tax justice. Journalist Nick Shaxson, for example, credits John with introducing him to the impact and scale of tax injustice when they first met in 2007. Nick subsequently wrote two of the most widely read books on the issue: Treasure Islands (2011) and The Finance Curse (2018).

Over the years, John has slowly established a global team of teams that helps him further his mission and grow his impact. It includes researchers and experts, whose recommendations for statutory reform have led to new global policies on tax avoidance. It also includes investigative journalists, who conduct the due diligence and reporting on tax avoidance across the globe (both the Panama Papers and the Paradise Papers have come from this network). And it includes alliances between multisector organizations such as NGOs and labor unions, and among professionals such as accountants and bankers.

The third strand of John’s strategy is to inform and reframe popular narratives on tax justice and its effects. Since leaving his role with the Jersey government in 1998, John has led the charge on informing the public about how tax avoidance impacts everyone. He was writing widely on the topic by 2007. John made clear in newspaper columns with global distribution how financial secrecy fuels corruption, and how the offshore economy distorts markets by providing loopholes to some businesses and not others. He explained how capital flight from the wealthiest in developing countries robbed those countries of monies they needed to grow. John also spoke to decision-makers in committee hearings and at international conferences. He ensured that G20 finance ministers put tax avoidance on their agenda. This persistence in engaging the public, bureaucrats and finance professionals in conversation about tax avoidance ‘changed the weather’ (as TJN itself phrases it) on how governments and the public understand tax justice.

By building a network of actors, decision makers and thought leaders, John has ensured that his impact can outgrow his direct reach. He has always worked to grow his idea, rather than his organization. This has allowed him to reach global scale with a lean team. To date, TJN has scaled to six continents, including alliances and close partnerships with more than ten other tax justice organizations such as the Global Alliance for Tax Justice and Alliance Sud.

While John currently focuses on engaging the wider public through storytelling strategies, his future ambition includes convincing human rights NGOs to add financial justice to their agenda, as that will highlight the cause-effect relationship between tax avoidance and chronic poverty.

John grew up on the Channel island of Jersey. His mother had fled pre-war Germany as a Jewish refugee and soon developed a love for English literature. John loved reading, too, but was interested more in news stories – especially those written by investigative journalist Harold Evans. John went on to study journalism and economics at university in London, where he also developed an interest in the systemic roots of poverty and inequality. He trained as a forensic auditor and economist.

While in London, John also joined a small Oxfam-affiliated group interested in how capital flight, tax evasion, corruption and embezzlement affects funding streams for international development. Little research on offshore tax havens was available at the time. With the help of mentors in the Oxfam group, John realized that the only way to understand how the system functioned was to work inside it. He soon went to work for the accounting firm Deloitte (then Touche Ross & Co) on Jersey.

In 1987, John was hired by the Jersey government as deputy to Colin Powell, then head of the island’s economic service. When Colin was promoted to Chief Adviser, John took over as head of the economic adviser's office. John counseled colleagues on a wide range of policies and led on the economic service’s computerization initiative. He also created new indices as director of the island’s statistical evidence service. In often-tense interactions with his former boss Powell, John pushed for more financial regulation and believed that the UK government in Westminster would step in to check shady financial dealings on the island. He had also expected a more vigorous intervention from the OECD and other international bodies. Frustrated that colleagues were knowingly facilitating tax evasion, John was preparing to leave his job when he was contacted by an American journalist investigating high-level fraud and racketeering. John learned then that Jersey officials themselves were involved. He became a whistle blower and, amidst growing hostility, left his job and the island.

John found allies back in London who would later become co-founders of the Tax Justice Network. This success kick-started the idea that a global network of journalists, civil society organizations, and actors within multilateral organizations was needed to fight tax injustice and its far-reaching effects. John continues this work today – mostly from his home office in Chesham, Buckinghamshire.