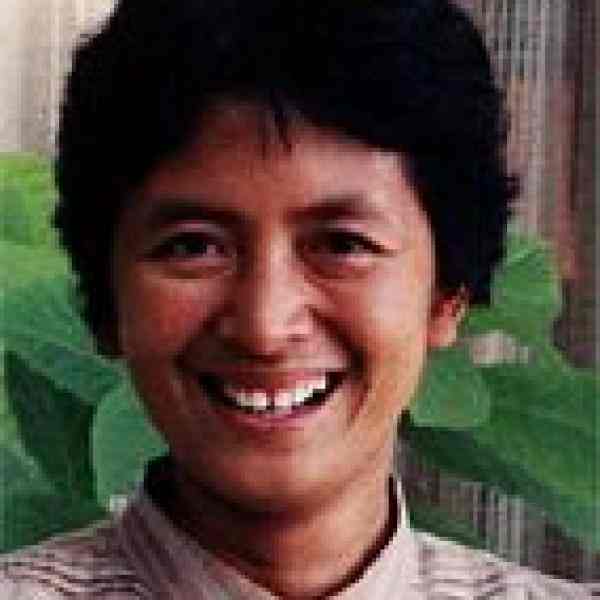 Tuenjai Deetes is working with tribal populations along the Thai/Burmese border in Northern Thailand.

One of Tuenjai's first objectives is to help these previously shifting slash-and-burn tribes settle down and adopt sustainable agricultural practices. Rapid population growth and forest disappearance leave little choice, either for the tribes or for the environment. Tuenjai and her co-workers are pressing tribes to adopt valley contour cropping on their eroding hillside fields. Sturdy, valuable, often nitrogen-fixing bushes are planted in horizontal lines along these fields, breaking up run-off and encouraging absorption during rains. She also encourages crop rotation in each alley. One year tribes will plant cassava and the next year soy beans, in order to maintain soil nutrients. As more of the tribes' fields remain fertile, less of Thailand's remaining watershed forest will go under cultivation. One of the Akha tribal communities with whom Tuenjai has been working has now taken to valley cropping, a major breakthrough especially because the Akha are exceptionally traditional. It is also a well-timed success as hunger has been visibly gaining ground over the prior several years. Other groups have started to ask how they can do the same thing. Tuenjai's second major thrust is specially adapted education. She has helped 70% of the children in the villages where she's working learn rudimentary Thai. Children also study other subjects that will give them the opportunity to enter government schools. Tuenjai's schools also build on what these children know from their own environment and culture, thereby strengthening their own cultural identity, which can prevent crippling feelings of alienation. Formal schoolwork is supplemented with programs closely fitted to the community environment. For example, while running the community seedling nursery, the children learn all the region's tree varieties and how they can be used sustainably. Adults are also being served by Tuenjai's village schools. Evening classes introduce parents to Thai language and help them understand how to access government services. This knowledge can be used to help these formerly nomadic people gain citizenship. This leads to greater security for the tribes and for Thailand, which is increasingly concerned about cross-border migration. Tuenjai's work has attracted the attention of the Thai media and also of the government. Thailand's Education Ministry has recently approached Tuenjai for help in learning how to adapt the Ministry's educational efforts throughout the northern hills. Tuenjai has also received the cooperation of others in the area, including military officials concerned with security along Thailand's sensitive and drug-affected borders with Burma and Laos. She has also drawn many others to this difficult work, both from the tribal community and from universities throughout Thailand.

The hill tribes and the environment of the north are currently locked in a grim destructive cycle where one problem feeds another. The number of hill tribes is growing rapidly, reflecting both continual migration to Thailand from Laos and Burma and high birth rates.

This growing population has already contributed enormously to the destruction of much of the forests of the north. The process will continue as long as this growing population continues to use traditional slash-and-burn farming (and even burn-to-hunt) techniques. As the hill tribes are drawn into the cash economy and their need for income grows, they try to farm larger and more vulnerable land. Much of the north has been deforested over the last decade, and the already serious erosion is quickening.

In addition to this deteriorating natural resource base, these tribes are suffering in a number of other serious ways. Commonly not citizens, they are both the neediest and the least served people in the country, whether in education, economic development or health. Their unique cultures and their sense of community and self-confidence are also threatened as conditions deteriorate and more and more young people move to the cities for employment. The Thai authorities also worry about the tribes as a security risk. Traditional nomadic movements across Thailand's frontiers by tribes that could be Lao, Burmese or Chinese as easily as Thai, can support insurgencies and drug traffic and exacerbate tensions with the neighboring countries.

Tuenjai's strategy begins with genuine institutionalized respect for the tribes with whom she is working, combined with an open, collaborative approach to the government and other centers of influence.

By listening well, and by building this capacity into the highly motivated organization she is continuously and carefully recruiting, she has been able to evolve approaches to the problems of the hill tribes that work and that reinforce one another. As a result, she now has a powerful, holistic model approach - and one that she can train others to use.

The situation defines her first priority - helping the tribes to work out a new, sustainable relationship with the natural resource base. At the same time, she is working to help the tribes develop the capacity to work out future adaptations to an inevitably changing environment, on their own terms. Until they have this self confident capacity, their culture will have little chance of surviving in a rapidly changing environment.

Now that her model approach is catching on, more of her attention must turn to how to spread it widely across the hills. She has long nurtured an important set of relationships in the major universities that have helped define the issue as an important one for the country. She hopes to draw the universities into undertaking a series of needed studies of conditions in the hills over the next several years.

This special set of ties to the universities has had a further important, if unplanned, effect. Tuenjai has become a role model for concerned students weighing how best to spend their lives. She is also reaching out effectively to the government, including the military. Her work helps settle the tribes and then encourages their becoming effective citizens - exactly what is needed to overcome the security risk.

Tuenjai grew up in Bangkok. As a freshman at Chulalongkorn University in Bangkok, she visited the tribes and found her life work. By her senior year she had helped lead the University Hill Tribe Club onto a new and more serious path than its earlier history as part of the hiking club. This interest led her to major in sociology and anthropology. After graduating, she worked for three years in the hills in a program sponsored by Thamassat University, also in Bangkok. She then worked in the northwest with the Adult Education and the Non-formal Education Departments of the Education Ministry. During these years she learned several tribal languages and built a personal storehouse of information on the tribes. Then she struck out on her own. First she spent a year living in a Lisu (another hill tribe group) village. Then she founded the Hills Area Development Foundation and launched her current work.