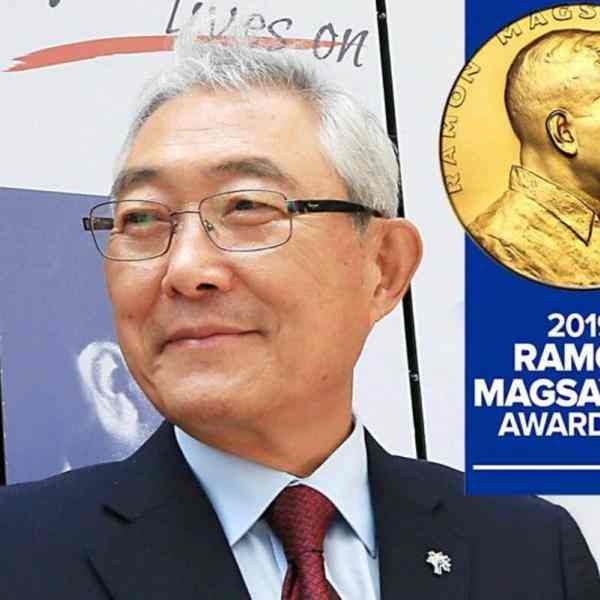 Jongki Kim has pioneered a national change in law and attitudes toward bullying in schools in Korea over the past eighteen years. Through his work, Jongki has introduced many initiatives to both reduce and mitigate the effects of bullying on both the victims and the perpetrators.

Jongki led Korea’s first organized effort to recognize school violence and define it as a systemic social problem which concerns many stakeholders, including students, families, and schools. When Jongki founded the Foundation for Preventing Youth Violence (FPYV) in 1995, school violence in Korea was seen as merely unfortunate and isolated incidents among troubled students. To build a chain of intervention, he first worked to generate society-wide visibility for the issue by drafting the Special Act on Prevention and Handling of School Violence and engaging the public to support its passage. Passed in 2004 by the National Assembly, the law put strong pressure on government authorities and schools to take systemic actions.

Jongki went on to create concrete opportunities and incentives for key stakeholders to get involved in addressing school violence. He believes that lasting change will only be possible when solving school violence becomes a societal priority in which everyone has their respective role, instead of ceding responsibilities to experts. Jongki has engaged various groups including teachers, police officers, attorneys, counselors, and corporations in every step of the intervention system.

Having defined and created the entire field of school violence policy in Korea, ranging from prevention and detection to intervention, Jongki continues to innovate on the intervention chain and has begun to grow his impact internationally. Recently, he created a reconciliation program to encourage constructive and empathetic communication between the victim, the perpetrator, and both families. Additionally, Jongki has built a post-violence care program to prevent the often overlooked long-term effects on the victim.

Suicide is the number one cause of death among South Koreans under the age of 24, and bullying is one of the biggest contributors to youth suicides in the country. According to a joint survey conducted in 2013 by the Bang Jeong Hwan Foundation and the Institute for Social Development at Yonsei University, one of seven elementary school children said they had been bullied. Unfortunately, the suicide impulse among students who have been bullied is noticeably higher than the average. The most recent result of the annual survey by FPYV shows that 44.7 percent of children who had been bullied have thought about committing suicide. The government recently named school violence as one of the four “social evils” that need to be stamped out of Korean society, along with sexual violence, domestic violence, and junk food.

Despite the serious nature of the problem and recent attention to the issue, the default reaction to school violence by educators and the government was previously to understate, cover up, or ignore the problem. Educators and government officials were afraid of losing face if the problem were to be revealed publicly. Additionally, because many school officials grew up during different times, they generally viewed violence at school as something children “grew out of.” Korea did not use the word “bullying” (or “school violence” in Korean) despite the fact that it was becoming a more frequent and serious occurrence in the everyday life of students across the country. Reflecting this ignorance and unwillingness to change, government officials did not allow him to use the word “school violence” in the organization’s name

when Jongki founded in 1995. They told him not to disrupt schools, saying bullying is only a rare occurrence among troubled children and dropouts.

When Jongki founded FPYV, there were no other organizations focused on addressing school violence. It was only after Jongki started the foundation that self-help groups of victims and their families began to form. Still, their work did not go much further than protesting against the government and blaming its inaction for the continued bullying in school. There was little research available on school violence, much of which was based on anecdotal and superficial data built from a purely academic perspective.

While an effective intervention system for school violence was slow to develop, school violence itself continued to evolve in its scale and forms, making it difficult to detect or tackle in a timely manner. As a result, violence at school was often left unnoticed and unaddressed, leaving children with nowhere to turn, resulting in serious emotional and developmental implications.

Jongki first worked to create a legally binding framework in order to pressure education authorities to publicly acknowledge the prevalence of violence at school and act on the issue without the fear of public shaming. In 2001, Jongki organized the first public hearing to discuss the needs for a special law about school violence and began to build societal pressure for action. Jongki and FPYV led a nationwide campaign to gather signatures, garnering support from 470,000 citizens urging the law’s passage. This resulted in the Special Act on Preventing and Handling of School Violence in 2004, and since then Jongki and his organization have been directly involved in making over 20 amendments to the law as the leading authority on school violence.

Seeing that the lack of information about school violence was a key impediment to designing effective intervention programs to appropriately address the problem, Jongki’s organization has published an annual nationwide survey of school violence since 2001. As the first of its kind in Korea, it has become the most reliable and widely used data source on school violence. Through the survey, FPYV notices the trends in school violence, such as the increase in violence among and toward girls, as well as the rise of cyberbullying. Observing these trends has allowed for more concrete policy recommendations based on the realities on the ground.

Jongki has also created a comprehensive online learning program for parents, teachers, and police officers. Since these individuals are the closest adults to the children and thus are likely to be exposed to the first signs of school violence, Jongki saw the strategic importance of equipping them with knowledge and tools to identify and stop school violence. He incentivized wide participation in the training program by connecting it with teachers’ and police officers’ performance reviews as well as making resources available online. Since 2010, Jongki’s organization has certified 5,000 adults as qualified instructors of school violence prevention and another 10,000 as school violence counselors. Once certified, the instructors teach their students about how to detect and deal with school violence. Through this train-the-trainer approach, Jongki has been able to reach a broader audience, in addition to the over 500,000 people who are directly educated by his organization annually about school violence through lectures, workshops, and booklets distributed in schools.

While Jongki’s social entrepreneurship career began partially out of his frustration with government inaction, he also understood that working with the government is critical in scaling his impact and institutionalizing the change. He consciously built strong relationships with high-level government officials and key decision makers. As a result, Jongki was able to win major government funding in 2007 to scale his foundation’s School Violence SOS Support program—the first major government-citizen organization (CO) partnership in Korea on the issue of school violence. With the funding, FPYV launched an on-site counseling and mediation service for students, parents, and teachers, meeting victims where they are and making professional help more accessible across the country. Since 2007, the program has helped 50,000 students annually. Today, Jongki’s organization continues to work nationally as the country’s largest school violence related organization with 13 regional branches.

In addition to providing much needed help to victims and their families, Jongki sees the importance of changing the perception and attitude of the perpetrators. Jongki works with family court judges to educate and rehabilitate perpetrators instead of sending them to juvenile detention centers. He understands that by turning by-standers, would-be victims, and would-be bullies into changemakers he can begin to end bullying problems in Korea for good. Therefore, his organization has launched several campaigns such as the “Happy Friends Movement” to encourage students to come up with creative ideas to build a violence-free school environment.

Jongki also believes that solving an entrenched problem like school violence requires every member of society to play a role and to understand empathy. Therefore, he engages diverse institutions and groups, including security service companies to protect victims of severe school violence cases, attorneys to offer pro bono legal advice, life insurance companies to lead communication campaigns to inspire children to respect their lives, and art groups to help victims heal and recover. Jongki also created the Youth Protection Award in 1998 to recognize and reward individuals who have made a significant contribution to protecting children from school violence. By engaging private companies, the government, and media as sponsors and inviting the first lady to the award ceremony, he increased the award’s credibility and visibility. Later the award program was adopted and run by the government. FPYV is now widely considered a place for inspiration and practical ideas when it comes to school violence interventions.

Jongki continues to innovate and upgrade the foundation’s work in response to the ever-evolving school and societal environments and the changing needs of victims. He recognizes that many bullies are prone to repeat their attacks even after outside intervention and as a result, victims continue to suffer emotionally and psychologically long after the initial bullying begins. The parents of victims and bullies often experience marital problems as a result. Therefore, Jongki has recently launched a reconciliation program to facilitate empathetic and constructive communication between all parties concerned to break the cycle of violence and victimization. Also, with financial support from corporations, Jongki’s foundation is expanding its post-violence care program to assist victims to restore self-esteem and confidence. In addition, as children are beginning to experience bullying younger than ever before, Jongki is working with 100 elementary schools across Korea to incorporate school violence prevention in their curriculum.

Jongki also plans to create a team to capture his organization’s knowledge and experience in building an interconnected intervention system against school violence, and share it with societies faced with similar challenges. He has already exchanged ideas with organizations in Germany and Japan, and is exploring possible partnerships with organizations in Singapore and northern parts of China, where many Korean descendants reside. To grow its impact internationally, FPYV obtained official consultative status with the UN Economic and Social Council in 2009.

Jongki had a very successful corporate career prior to FPYV. He thought both his personal and professional lives “could not get any better.” His world was turned upside down in 1995 when he got a call during a business trip to China that his 16-year-old son committed suicide. Jongki had no idea that his son had been repeatedly bullied by upper class students. He was overwhelmed with grief and guilt, and felt completely helpless.

When Jongki found out that the same students who drove his son to death were still bullying other students, including close friends of his son, he reached out to the school and the victims’ parents to take legal action. But the school did not take the problem seriously, saying bullying is just an unfortunate incident that only happened outside of the school premises. The victims’ parents refused to cooperate saying their children needed to move on and concentrate on studying. It was at that moment that Jongki realized how ignorant and ill-equipped Korean society was about school violence, just as Jongki did not know about his son’s pain until his tragic loss. He realized that school violence was not a private issue between the victim and the perpetrator, and that it could be best addressed only when it is approached as a systemic social problem concerning students, families, a nd schools.

The same year his son passed away, he founded FPYV—Korea’s first CO focused on school violence—leaving his outstanding corporate career behind. Since then, Jongki has never looked back and dedicated all his energy and fortune to changing the country’s perceptions and responses toward school violence with relentless determination.