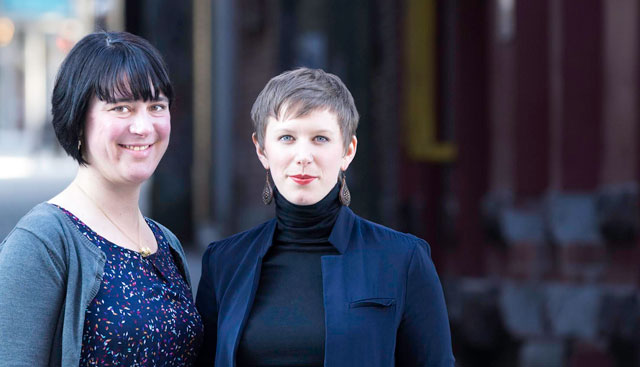 Ashoka Canada is pleased to announce the selection of our first Storytellers-in-Residence, a new program supporting Canadian innovators in media.

Vancouver-based journalists, Erin Millar and Christine McLaren, will serve as joint-fellows who will spend three months exploring how “solutions journalism” can be produced and funded - what emerging models in Canada and elsewhere tell us.

“As the world changes rapidly, we will need the help of journalists to make better sense of not just the problems but the work of changemakers responding with solutions,” says Elisha Muskat, Executive Director of Ashoka Canada.

“Our first storytellers-in-residence will help us understand how solution-focused journalism can be advanced in Canada, how it can be funded, and how journalists and social innovators might collaborate,” says Muskat.

For the last 13 years, Ashoka has identified and supported more than 50 leading social entrepreneurs in Canada, connecting them to a global community of more than 3,000 Ashoka Fellows. Ashoka also identifies and supports changemakers in post-secondary institutions, companies and the philanthropic sector, and now in the media.

Millar and McLaren were chosen for their work innovating new models for producing collaborative journalism in the public interest.

As independent journalists working with media organizations around the world, they had come to the realization that we need more constructive public dialogue about possible paths forward if we hope to tackle the steep challenges facing our society. Inspired by organizations like the Solutions Journalism Network, they launched Discourse Media in early 2014 to explore how journalists could initiate partnerships and collaborate more deeply with organizations and individuals in order to achieve better reporting on solutions.

“We started Discourse Media because we believed that finding ways to collaborate would enable us to produce better, more impactful solutions-driven journalism," says McLaren. "This fellowship will allow us to really expand that conversation and help us all learn from other models that have proved successful in Canada and around the world, as well as from the barriers others have come across.”

During their residency with Ashoka, Millar and McLaren will look at how start-up and traditional media organizations in Canada and beyond are integrating collaborative and solutions-oriented approaches to reporting into their current models. They will also investigate how changemakers in different sectors are engaging with journalists to tell their stories of change, and help journalists better understand both the issues and the nuances of potential solutions. Their aim is to identify opportunities for leveraging collaborations of all kinds—research, dissemination, funding, etc—in order to increase serious journalism on promising solutions that gets beyond the “what” and into the “how”. They will share their findings with the journalism and changemaker communities at the conclusion of their fellowship.

This experience with Ashoka will then help Millar and McLaren launch and support a growing network of solution-focused journalists in Canada.

Erin Millar is a journalist, multimedia editor and author with a lifelong interest in education. She has worked for The Globe and Mail, Maclean’s, Reader’s Digest, The Walrus, The Times of London and other publications. She has reported from over a dozen countries on three continents. Her work has been translated into 20 languages and published in 34 countries. She is currently writing The School the Kids Built, a book about the future of school. She teaches journalism at Quest University.

Erin is lead reporter of Deeper Than Knowledge, a digital journalism project produced by Discourse Media. The goal is to report on how a network of hundreds of schools around the world are working together to make education more relevant to students’ lives.

Christine McLaren is a journalist and researcher with a focus on the intersection between urban development and environmental and social issues. She has worked with media outlets including Monocle, GOOD, Metropolis, Next City, The Globe and Mail, Xinhua News Agency, MSN and others. Christine spent three years travelling around the world as the resident writer of the BMW Guggenheim Lab, a mobile urban think tank project of the Solomon R. Guggenheim Museum. She also serves as Director of Research and Partnerships for Happy City which leads her to speak, conduct workshops and consult with cities and organizations around the world on urban happiness and wellbeing.

Christine is currently the lead reporter of Moving Forward, a collaborative journalism project aimed at bringing to life the wealth of available information and data about the Metro Vancouver transportation system in advance of a major funding referendum, and empowering voters to make a more informed decision on the ballot.