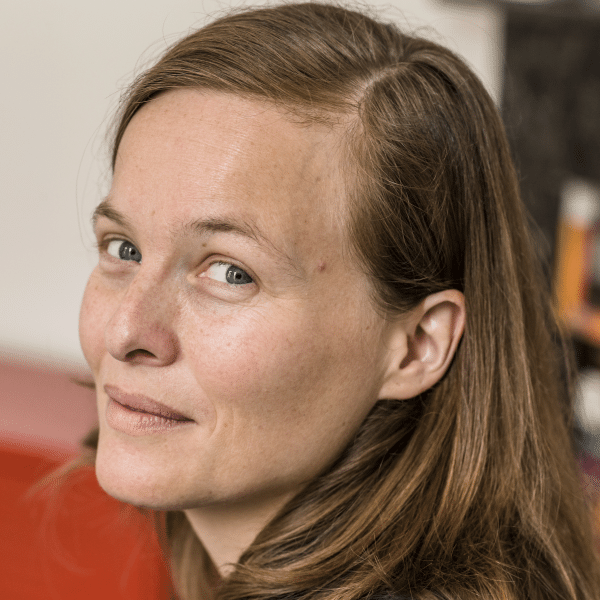 Using a method to re-channel aggression in inmates throughout the Belgium prison system, Marjan Gryson is creating opportunities for inmates to set positive goals, chart a course for a more constructive life outside of prison and reintegration into society as full citizens. Focusing on transforming destructive and debilitating anger into positive activities for groups outside the prison walls and often confronted to aggression, she educates a wider public to empathy and creates the conditions for more successful reintegration in society and reduction in recidivism and violence.

In Belgium, as in the rest of the world, most prisoners are dealing with aggression issues - either having difficulty controlling their anger, or deepening levels of anger by being confined in a prison’s violent environment. And yet no psychological support is offered to inmates within the Belgium prisons, except for sexual offenders. Marjan has developed the first program focusing on redirecting aggression toward solutions for all Belgian prisoners, whatever the crime they have committed. Never reducing prisoners to the crimes they have committed, she creates an opportunity for individuals to set aside their anger, and develop the tools, plans and resiliency to work towards positive goals.

Already developed in five prisons in Belgium, the sessions are creating opportunities within the prison for inmates to set positive goals and build future projects once released, and enable inmates to reintegrate society as full citizens. To support this transition from prisoner to citizen and properly deal with the stress of reintegration, Marjan works both inside and outside the prison. By doing so, she engages and coordinates all the stakeholders in the environment of prisoners, from families to prison guards, probation courts to social organizations.

Marjan also is beginning to address aggression as a societal issue that goes beyond prisoners. Targeting groups often confronted with tension and incivility in their everyday life, Marjan is conducting trainings and workshops to sport clubs, lawyers, social workers or teachers and teach them how to positively turn aggressive attitudes. She is seeking to provide strategies and tools to redirect and manage aggression in segments of society where aggression and anger may be more likely to erupt. Marjan is educating the wider public about the causes and tools to redirect aggression, and helping change society’s negative perception about former prisoners and their potential to contribute in a positive way to society.

Marjan has developed a pioneering approach in Belgium, and in Europe, first effort to re-direct aggression in prisoners toward more positive goals and specific plans. In 2008, after six years working as a psychologist for sexual offenders and realizing the limit of her action, she decided to create Touché, a non-profit organization offering psychological support to all kind of prisoners facing aggression issues. Based on solution-focused therapy, Marjan has developed an arsenal of tools in collaboration with diverse therapists - group sessions, individual therapy, family sessions and exercises. All of them have the same goal: help prisoners set positive goals and develop a specific plan for success outside of the prison walls.
Prisoners can join the program no matter the specifics of their criminal track record. For Marjan, involving the prisoners in the process for their therapy and recovery right from the start is crucial. Prisoners are not seen as criminals nor as sick people, but as clients. Every five sessions or so, the therapy is assessed by Touché and the client to agree on how to proceed further. A decision to end the therapy is never based on having followed a certain number of sessions, but always done in agreement with the client. In the sessions, prisoners are guided and encouraged to set positive goals and the specific steps to achieve those goals, as well as given tools to help manage situations of conflict.
Convinced that it is imperative to work with the prisoners’ ecosystem to really impact their lives, Marjan has set as a principle to work with inmates both inside and outside prisons. She works in coordination with the different organizations interacting with prisoners, basing their partnership on a long-term engagement strategy with the goal of decreasing recidivism. Marjan has currently managed to convert five prisons in Flanders to work with Touché. She is reaching 100 prisoners per year and is targeting to work with 1,000 of them per year within five years. Since the creation of Touché, she has worked with 500 prisoners. Her program is so well perceived by the prisons administration that Touché is now part of the Board of Administration in one of them.

Touché’s methodology has been rewarded by the Human League Association and the solution-focus research association. The Belgian department of Justice is today taking over her methods and trying to replicate her model inside their psychological services, therapy sessions for sexual offenders and prison guard training schools. By September 2014, this training will be fully integrated in the prison guard school’s curriculum to help them to manage situations of aggression and violence in a positive manner. Finally, in the vein of her preventative work, Marjan is partnering with universities to develop specific statistics and tools to measure her impact in terms of incidents that are avoided thanks to the program, and recidivism rate.

By working in conjunction with all key players, she creates a bridge between the inside and the outside and facilitates the reintegration of inmates within the society. Marjan has set up one specific session with prisoners’ family to help them rebuild a relationship and maintain a link with the outside. Moreover, Touché is the only organization today in Belgium offering group or/and individual follow-up to ex-inmates, helping them to transition into life outside the prison walls. Clients have the opportunity to continue to receive a psychological support and social service once they are released. By doing so, she is helping ex-inmates to rebuild their trust in themselves and their capacity to adapt to their new life.

Building upon her experience working in prisons, Marjan is today working to implement new programs helping teach people how to deal with aggression in their jobs and in society. Targeting groups confronted regularly with aggression in their daily life, such as sports clubs, lawyers, health care workers, social workers and teachers, she is developing specific trainings and best practices on how to deal with aggression in a positive manner. She has already set up training sessions for social workers, and one training program is scheduled for victim/offender mediators. Developing these new programs is also a way to create a sustainable business model for Touché. The program for inmates remains free, while other programs will be charged.

Marjan aims to create a shift in society’s negative perception of convicts and ex-convicts. Since 2011, Marjan is one of the leading members of a workgroup, called De Huizen, on tomorrows’ prison system composed of prison directors, criminologists, psychologists, prison staff and consultants. Working on changing the current prison system by offering an alternative model that positions prisoners as empowered actors, and relocalizing the at the heart of cities, this project reduces recidivism rate and facilitates inmates’ reintegration. Meeting at least once a month, De Huizen is working on three types of levers: lobbying actions toward political parties (a resolution was signed by many of them), communication actions to increase awareness on detention conditions toward the general audience (communication campaigns, book publishing) and design plans (Marjan and her team are currently working with architects to design prisons of the future). Marjan is thus convening key stakeholders across Belgium to transform prisoners as active agents in society by addressing the variety of elements that stand in their way as obstacles to their civic success.

Since she was a little girl, Marjan had a need to fight against injustice. During her early years, her best friend was excluded from the school community because he was not a good enough student. This situation angered her but she didn’t have the tools to turn her energy into positive goals. Interested by social issues, she decided to study psychology. She worked in the prison system with a group of sexual offenders during her last year of her master’s program. The purpose of the group was to try to help the offenders understand why they took the course of action they did. But she realized soon how powerless and limited her action was to really help these people and become convinced that reducing inmates to their crime instead of embracing their whole personality had a perverse effect. In parallel to her job, she created an experimental project named “Victim in the Picture”, trying to raise prisoners empathy for their victims. This program has now become an established practice.

In 2008, more and more irritated by the lack of coordination and of efficiency in her work, Marjan quit her job and created Touché with two others therapists. With her experience in prisons and willing to make the current system change, she set Touché on 3 key principles: 1) always working in coordination with the others organizations; 2) maintain a bridge between the inside and the outside; and 3) involve inmates and their environment in the therapy.

To make sure that her project will not be just another experimental program but be maintained over time, she looked for support from prison workers and institutions around her concept. She managed to federate different stakeholders and helped them to question their perception of aggression and asking them for feedback. It took her almost a year to convince the Department of Justice to allow her set the first session within the prison. She had to demonstrate a lot of perseverance, as public institutions were reluctant to give money for a program offering psychological support to inmates.

She is today focusing her energy on growing Touché throughout Belgium, raising awareness on detention conditions and building the future of prisons in Belgium by leading the workgroup project “De Huizen”.