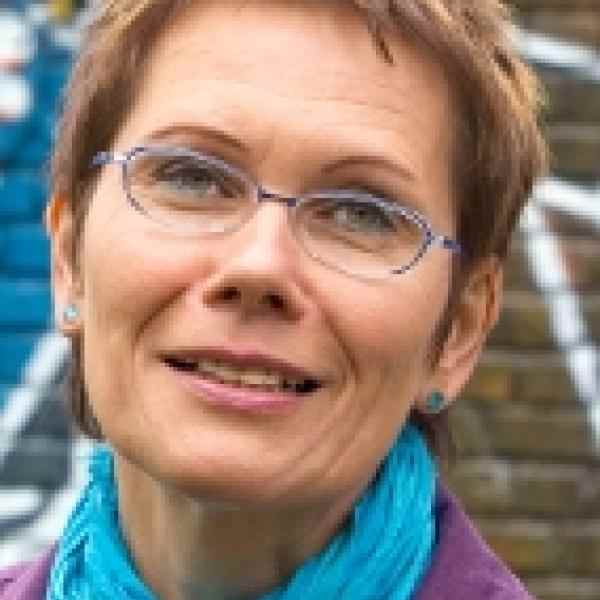 Combating a society-wide fear of dealing with the problem of mental illness, Manuela shifts the focus from psychological disorders to the concept of mental fitness. In an effort that is effectively removing an age-old taboo, her organization creates an infrastructure that enables local health care organizations to do effective prevention work in schools, supports teachers in dealing with the emotional problems of their students, and increases the students' emotional competences, enabling them to effectively seek help and react to mental crisis. At the moment there exist 35 local groups that conduct workshops at schools in their region, reaching about 22,000 young people per year. To serve schools even more effectively, Manuela is beginning to train teachers to conduct mental fitness workshops themselves.

Despite the fact that 20 percent of all school children in Germany have already experienced a severe mental crisis, psychological problems are still considered taboo and those who suffer from them are ostracized. As a result, children do not dare to talk about their mental illnesses, but instead internalize their problems and withdraw from society. This leads to poor school performance and a further deepening of mental problems, often resulting in unemployment and a life-long dependency on public welfare. Manuela’s organization, Irrsinnig Menschlich e.V., changes this pattern. Through it, she equips local organizations with the knowledge and know-how to conduct effective prevention work in schools and help young people overcome their mental problems, encouraging them to talk about their problems and seek help from experts. Manuela’s prevention program incorporates three innovations that contribute to its success. First, the program re-frames mental problems from the perspective of mental health, placing the emphasis on possibilities and resources rather than deficits and pathologies. Second, the program places people who once suffered from mental illness and mental health professionals in teams who then work to educate and demystify mental health in schools. Lastly, by relying on regional networks, the program provides a stable, low-threshold link between schools and support organizations, which can help students in crisis. Manuela further contributes to removing taboos by cleverly marketing the concept of mental fitness, which similar to physical fitness, requires training to develop. She also sparks public discussions around the issue of mental illness with the help of prominent ambassadors and a film festival that travels to 70 cities throughout Germany.

More than 25 percent of Germans develop some kind of psychological disorder during their lifetime and more than 20 percent of young people at schools have already experienced a severe crisis. Despite organizations that support those with psychological disorders, negative social stigmas and labels continue to inhibit people from seeking out help. German opinion polls show that the majority of people regard individuals who suffer from mental disorders as volatile and dangerous, and oftentimes, mental problems are seen as a personal fault. Consequently, it is difficult for health care organizations to conduct outreach and preventive work because the issue at stake is controversial and sensitive.

At schools, the situation is especially severe. Many teenagers suffer from psychological crisis for the first time during puberty, a time where they feel especially vulnerable. They do not dare to talk about it, but internalize their problems and withdraw from others, which leads to poor school performance. For teachers, the situation is not easy either, as they often feel overwhelmed by the rising psychological problems of their pupils, and do not know how to address the situation, lacking the words to talk about it and afraid of inflicting more harm on those concerned by making their condition public, They do not know how to deal with troubled children and how to protect them from becoming stigmatized.

Mental diseases create enormous economic and social costs for society, despite the fact that many of them could be easily prevented if people accepted help at the onset of their illness. The highest cost associated with mental illnesses is not the therapy or prevention programs themselves, but the enormous costs related to the public welfare system needed to support untreated mental illnesses.

Manuela tackles the social stigma associated with mental illness by creating an infrastructure that provides the missing link between schools and support organizations, empowering students to deal with psychological challenges and helping teachers become pillars of support. Her focus on schools allows her to reach youth when they are most vulnerable, but still open enough to absorb new concepts and overcome prejudices.

Manuela has developed a hands-on curriculum that is introduced to schools by representatives of local healthcare support organizations (mostly psychologists or other professionals whom she trains and qualifies) together with a person who suffers or used to suffer from a psychological disorder. Together, the “expert” and the (ex-)patient conduct workshops at schools based on Manuela's effective pedagogical model. The workshops aim to help students understand the strength needed to overcome a mental illness by interacting with an expert, thus changing their perception from pity or fear to admiration and respect. This also helps the expert gain more self-confidence to talk about his or her experience in a positive environment. The workshop pupils also open up and talk about their own experiences, either about their own problems or those they encounter in their families, making it clear that reaching out for help is not a sign of weakness.

Having begun as a workshop facilitator herself, Manuela now has a growing organization, which she is spreading throughout Germany by training local partners. The core is a team of psychologists or psychiatrists specializing in children, who then reach out to find suitable “experts in their own matter” and establish contacts with schools. An important feature of Manuela’s model is that the therapists never pair up with their own patients when they go into a classroom; rather, both the moderator and the expert work together at eye-level, effectively preventing any elements of dependency in the relationship.

To create awareness in schools around mental illness, in 2006 Manuela and her team developed a film festival called Ausnahmezustand, which features films dealing with various aspects of mental illness. In each of the 70 cities the festival travels to, Manuela and her team invite school classes, relevant stakeholders in the municipality, the youth agency and the local health care organizations and support networks to discussions and round tables after the show. Thus, she becomes known in cities where no local chapter has yet been established, raising interest and finding potential partners through increased media coverage.

At the moment, Irrsinnig Menschlich e.V. is financed through different stakeholders which include both the association members who pay an annual fee, as well as the film festival and workshops which have begun to generate revenues. The expansion of the internet platform is secured by a large health insurance company, which is interested in expanding the cooperation, and the school mentor project will most likely be funded by the European Social fund, starting early next year.

The positive results of her program are scientifically evaluated and have evoked nationwide interest. Through a train-the-trainer concept Manuela has spread her approach to 35 groups all over Germany, and has already reached up to 22,000 children. To further help teachers and students, Manuela has also developed pocket guides to provide information on how to detect and react to signs of depression, schizophrenia, eating disorders and other disorders and help link pupils and teachers to relevant networks and support organizations in their region. Manuela is now working on deepening her program by establishing a school mentor system that hopes to spread to other German cities and throughout the European Union.

Manuela grew up in the German Democratic Republic (GDR). Contrary to the communist state doctrine that endorsed community and obedience rather than individualism and entrepreneurship, she was always attracted to setting up new projects and changing the direction of her work. At university, she set up a department for cultural studies and then worked as a project manager for science and public relations at a student center in Leipzig. During the collapse of the GDR and the following months of upheaval and reorientation, she got the chance to set up her own radio show at the recently founded public radio station, MDR.

During her time as a journalist she was especially interested in the lives of children and adolescents and their special challenges. Having had a brother with mental disorder, the topic of mental health has always been a part of her life. In 2000, when a colleague told her about a professor looking for a person that was able to conduct a media project which should help to change the perception of people with mental disorders, she started Irrsinnig Menschlich with nothing more than a vague idea and an empty desk.

The first weeks, however, were very discouraging. To get to know relevant players, she went to hospitals and other institutions working in the field of mental illness. Everywhere, she encountered taboos and hostile reactions. It was only after her first contact with a self-help group for people with mental disorders that she understood the dimension of the problem and realized that direct contact was crucial to overcome prejudices and stigmatization.