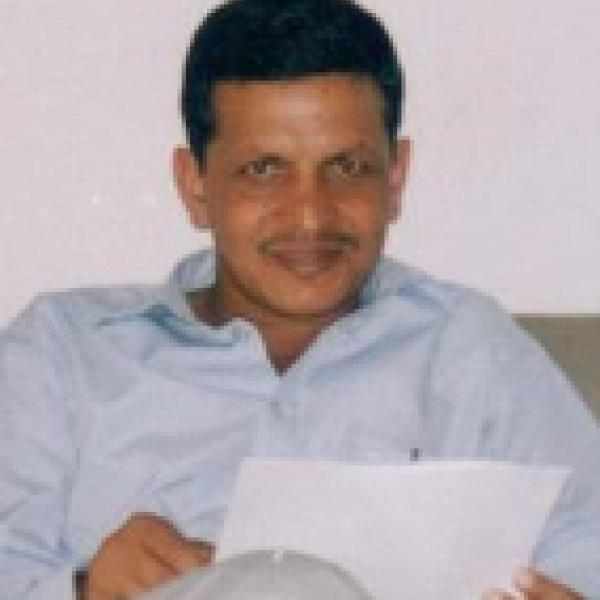 Man Bahadur Chhetri is combating the tradition of impoverished families sending their daughters to work as bonded labor for landowners and wealthy families. Combining education, advocacy, and legal action, he helps girls and their families fight the economic and cultural dependency that reinforces this bondage.

Kamlari Pratha is the practice by which poor families send their young daughters to work for landlords or wealthy families in the cities of Nepal. Man Bahadur uses the law to fight against the practice, making it illegal, and he uses economic incentives to create better alternatives for victims. Man Bahadur’s initiative, the Indentured Daughters Program (IDP), has become Nepal’s most effective organization advocating for and resettling bonded girls, who are also referred to as Kamlaris. He recognizes negative cultural norms and traditions as the primary deterrents to justice and full citizenship for them and is advocating for change from both the demand and supply side of the problem—the employers of bonded labor and the parents sending their daughters into servitude. Man Bahadur’s work is centered in the Dang District of Western Nepal—the area with the worst bonded labor problem. More than 1,600 girls have been rescued and are today enjoying their childhood and pursing formal education. IDP provides transitional skills development and leadership training programs to the parents of recently released children—designed to equip them with vocational skills needed to generate more income. Man Bahadur is helping the rescued Kamlaris and their parents act as effective social agents and role models among their village communities.

Among the Tharu ethnic community of Western Nepal, particularly in five districts of Dang (Banke, Bardia, Kailali, Kanchanpur and Surkhet), there exists a tradition of sending young girls from ages 6 to 16 to local landlords to serve as domestic helpers. The parents of the girls work on the landlord’s farm as agricultural laborers and are offered meager wages on a contractual basis—in exchange for the bonded girls—the parents of the Kamlaris are allowed to till a small piece of land for themselves. This provides crucial additional income for the family’s survival. After the formal abolition of this Kamaiya system by the government of Nepal in 2000, most of the children returned to their homes. The harsh economic situation, however, forced the parents to search for alternative means of employment for themselves and their daughters. These parents and children became easy prey for the wealthy urban families who were seeking services at low wages. Today, the parents receive less than Rs. 5,000 (US$70) per year for their child’s labor at best. In some cases, girls return empty-handed after a year’s contract. Contract agreements are most often verbal and are renewed annually on the day of Maghi, a local festival observed in the middle of January. Only a handful of the girls go to school. Some children are subjected to physical and psychological abuse. Many times parents do not even know the exact whereabouts of their own child, since children are treated as commodities and traded to several employers through brokers. The Kamlari issue is seldom highlighted by organizations and individuals working in development in Nepal, although the practice represents serious human rights violations. Exploitation under the Kamlari practice has caused significant negative impacts on the children involved and the society at large. The child is separated from her family at 6 to 7 years of age and is usually deprived of her right to an education. These girls become accustomed to urban lifestyles and often face serious adjustment problems when sent back to the village environment. The dream of a luxurious life and myths around city living draw young girls to the bigger cities in Nepal or neighboring countries. Finally, when the girls reach 16 or 17 years of age, many are sent to India and forced into prostitution. Specific data on the number of Kamlaris in Nepal is not available. However, based on estimates, it is believed that around 20,000 children below 16 years of age from the Tharu communities of Western Nepal alone have been sold as bonded labor. The system for bonded child labor has become entrenched through an assortment of semi-feudal employers and local middlemen who control the network of children in servitude. They are able to operate without fear of any legal repercussions. Although a law prohibiting child labor exists, enforcement is severely lacking. It is a rare phenomenon to be punished for employing a child.  Large amounts of funds have been spent on projects to eliminate child labor, but most have been short term, with no sustainable models that address this deep-seated cultural practice.

Man Bahadur has four strategies: He identifies cases and takes legal action against employers; he rescues girls and rehabilitates them with education; he breaks the family’s economic dependence with income-generating programs; and he works intensively with communities, media, and youth groups to build regional and national resistance to bonded labor.  Man Bahadur recognizes that Kamlari is a social, legal, and economic problem for girls, families, and communities. He has set up a network of Kamlari Abolition Committees (KAC) in 20 villages of Dang. These KACs work to raise community awareness and to advocate against the practice. The KACs includes as members the parents of the rescued children, traditional village leaders, intellectuals, and youth groups. They conduct monthly meetings facilitated by Man Bahadur’s organization. KACs also monitor the scholarships of the rescued girls in various schools to assure proper utilization of funds and prohibit families from sending off more of their children as Kamlaris. The KACs conduct awareness campaigns on the rights of children and also help to identify and take action against those who employ bonded girls at the community level. Over the next 5 years, Man Bahadur plans to expand his KACs to all six districts where this tradition is most rampant, so that the communities themselves can take ownership of the effort to end Kamlari Pratha. He will have a regional network devoted to this issue for an exchange of ideas and successful strategies. There has already been a significant reduction in the number of employed Kamlaris in certain districts and a marked increase in the number of girl children in schools.The task of identifying and rescuing a girl child from bonded labor is difficult and painstaking.  Man Bahadur first tries to find out from families why they sent their daughters as Kamlaris, where their daughters are currently, and how long they have been away. To obtain information, he must use examples of exploitation to make parents aware of the negative effects of the Kamlari system. In most cases, the families cannot bring their daughters back without some form of compensation or repayment to the employer. It is a delicate and complex challenge for villagers to go back on their verbal agreements. Man Bahadur is working to ensure that, after information on the girls is received, legal action is mobilized to free the girls from their employers. He has submitted 23 cases in court against perpetrators—parents, employers, and brokers—and has successfully won 20 cases, with three verdicts pending. These successes have acted as a very strong deterrent against more families sending their daughters off to servitude.Man Bahadur has developed an array of income generation programs for the women of the extremely poor households to ensure that the families stop sending their daughters as bonded labor to gain extra income; helping to keep the girls in school once rescued and enrolled. He has formed savings and credit groups with 180 affected families, where the mothers save about Rs. 20 per day and may take loans of Rs.10,000 to set up their own small enterprises. Older girls are offered non-formal education and vocational training. Over 150 of the parents have been trained and received seeds for off-season farming.Man Bahadur has a unique way to negotiate with schools in the district to adopt his program. He helps and supports the development of basic school infrastructure and the school. In return, the school admits formerly indentured girl children who have been rescued. He has formed partnerships with 15 schools in the village and plans to expand to other villages.  Mobilizing the rescued children has proven an effective means to prevent other children from being drawn into the illegal labor market. The children are able to share their experiences and difficulties with other children—demystifying the urban lifestyle. Child clubs at schools have been effectively used to spread awareness and have increased interaction between the girls. This has created an important shift and increased awareness for parents. Parents are becoming more active members on the committees and are willing to take on additional work to pay for their children’s education.Man Bahadur’s organization presents street dramas (collaborating with Ashoka Fellow Sunil Pokharel), radio programs, and organizes rallies against Kamlari during important festivals such as Education Day, Women’s Day, Maghi, and Children’s Day. He has also expanded his awareness campaigns to the cities where the Kamlaris are usually taken in as domestic labor, to sensitize city people against employing Kamlaris. He has started awareness campaigns in urban schools by showing videos describing the cultural tradition of Kamlari Pratha. Many of the students of these schools have contributed to a scholarship fund for the education of former child laborers. The impact is beginning to show. PLAN Nepal has replicated the program in six additional villages of Dang and is scheduled to be expanded to five other districts, with the possibility to work with over 20,000 families and larger local communities. He has established strong coordinated efforts with various organizations working for child welfare and is networking with bilateral and multilateral organizations in addition to lobbying government bodies. By creating an awareness of the injustice in Kamlari Pratha at all levels of society—especially among the youth— helps to prevent the practice from continuing.

Man Bahadur Chhetri was born in a small village in Baitadi, a district of far-west Nepal. Amidst the remoteness of his village and the severe poverty of his family, he struggled to complete his high school education. He was the first person to pass higher secondary education in his village. He was later sent to his uncle’s home in the city to continue his education and to help improve the family’s economic situation.When he was very young, he came across a bazaar where Deuki (a community tradition of devoting one girl child to the goddess for the rest of her life) were being sold as commercial sex workers in temples. The image of the brokers, the buyers, the young girls, and the behavior and environment frightened and horrified him. It was a memory that was etched permanently in his mind. He later resolved to work for the abolition of slavery of young girls.In seventh grade, Man Bahadur had the opportunity to act in a play called the “Ramayana”. The play raised Rs. 25,000, which the young cast decided to donate to a school for the construction of classrooms. This experience inspired him to become involved in education and society. He later served as a volunteer teacher at the same school where he had studied and was instrumental to the school’s development.Man Bahadur contributed significantly to the abolishment of Deuki and introduced education-related campaigns for rural women and children in western Nepal. In 1992, his organization, the Deuki Abolition Campaign began working in partnership with a local citizen organization, Tripura Sundari Village Development Association to successfully eradicate this tradition from Baitadi. In 1993 he founded Snehi Mahila Jagaran Kendra in Baitadi. Among the many programs it offers is a maternity home which provides safe and modern maternity service to thousands of rural women and children.