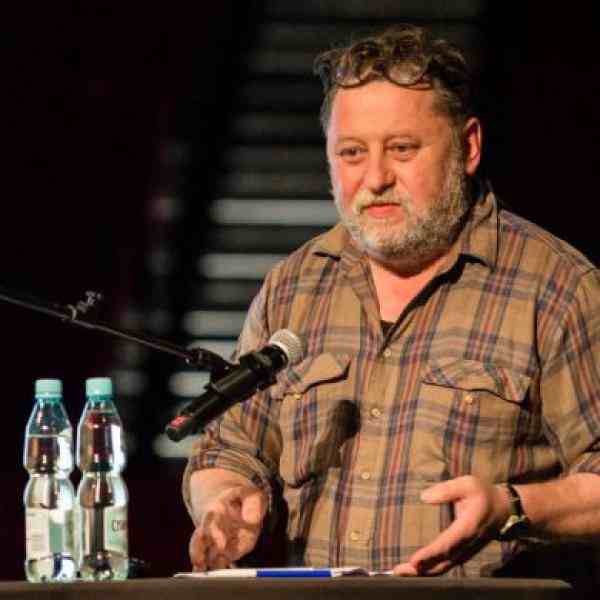 Since the late 1980s, Kuba has been building institutions and networks that have enabled the citizen sector to emerge, grow and thrive in Poland and surrounding countries. He has designed and continues to design these interventions in a way that shapes the sector not as a rigid model with its constant actors and pre-defined functions, but as an open paradigm, capable of continuously adapting and meeting new challenges.

Since the civic movement of Solidarity that brought the democratic revival in 1989, Kuba has worked to build a resilient civil society sector, uniting activists and leaders, redirecting civil engagement away from an anti-government narrative towards one conducive to nurturing values and ideas in support of bottom-up change.

In designing his strategy to reshape the potential of the citizen sector, Kuba recognized three prominent needs. First, he identified and addressed the need to develop the legal and institutional infrastructure needed for an active citizen. Moreover, he also shaped and grew how civil society functioned as active citizens without the overarching guidance of the government prominently seen in communist countries. Secondly, in doing so he identified and addressed the need to increase citizen sector capacity to act as the cornerstone of democracy and freedom. And finally, he established a resilient ecosystem to strengthen the sector’s ability to respond to critical societal issues as they arise. To meet those needs, he weaves the citizen sector together and empowers people to stand up as change leaders.

Kuba’s work goes far beyond the individual institutions he has created, instead engaging actors and teams at national and international levels, through organizations, systems and legal solutions that he initiated. Kuba has implemented an ecosystem leader approach, which shapes leaders focus on building ecosystem not their own organizations, not only in a dozen of organizations in Poland, but also in Ukraine, Romania, Hungary, Serbia, and Kazakhstan. As a board member he actively transforms policies of influential global organizations such as CIVICUS (World Alliance for citizen participation) and TechSoup (organization launched by Ashoka Fellow Daniel Ben-Horin). Moreover, Kuba promotes his approach at the European and global levels, being involved in a number of bodies such as the alumni network of Yale’s Greenberg World Fellows Program and the European Economic and Social Committee (EU Commission).

When the era of communism ended in Poland in 1989, there was neither legal nor institutional infrastructure for the citizen sector, let alone social entrepreneurship. There were no resources to learn about CSOs, training on how to run CSOs, or communication and exchange among CSOs, either in Poland nor across Central and Eastern Europe.

Not only was there no infrastructure, but there was also no frame of reference for what a citizen sector could even look like. While the wave of democratic rhetoric pervaded people's minds, the majority of the population had no experience with true participation or democracy. At best, they believed in the power of common participation exemplified in the Solidarity movement and other self-help initiatives.

A narrative of fear has also been suppressing social participation, another symptom of low levels of democracy. In Poland, for example, increasing numbers of Poles are not exercising their voting rights. Data from 1989 to 2006 indicates that average a voter turnout in the EU is 68,4%, yet in Poland it is 48,7%, making Poland the lowest voter turnout across former communist countries. According to World Ban, over the last 25 years, the average global voter turnout rate dropped by more than 10%. Low social participation also extends to the citizen sector, where the percentage of Poles who have volunteered has hovered around 10% since 2000, according to research done by Kuba's organization.

Since the late 1980s, Kuba has been establishing an active citizen sector in Poland. He is transforming an environment ill-equipped to support civil society into a resilient ecosystem that can continue to support evolving bottom-up change. He is building the legal and institutional infrastructure, shifting the mindset of citizens to be active participants, and creating resilient social capital among citizen sector leaders. Moreover, by encouraging bottom-up leadership he is creating the space for social entrepreneurship and social innovation by conscientious creation of subsequent layers, sharing good practices as well as mistakes, and promoting the ecosystem leader approach in each layer of his work.

Kuba started his ecosystem work, building infrastructure for CSOs to exchange and to better work together. Through the founding of the Association for the Forum of Non-Governmental Organizations, Kuba was able to connect CSOs and establish a solutions-finding framework; through annual and regional convenings of NGOs and CSOs for the first time, the Polish civil society sector was able to collectively discuss urgent topics and create coordinated advocacy mechanisms. Furthermore, since 1996, every two years, the Association hosts a national convening framed as a festival of civil engagement and knowledge exchange platform. These convenings, with over 10 000 persons present, have led to the avocation of new legal structures such as the Law on Mass Public Money Collection (2014) and the amendment to the act on public benefit and volunteering.

In 1990, Kuba moved into the second layer of ecosystem development and focused on research and knowledge management with the formation of the Regardless of Bad Weather Foundation. The Foundation runs a continuous research program on citizen sector activities and in 2000, became an independent organization Klon/Jawor. Currently, Klon/Jawor focuses on gathering facts about the citizen sector in Poland and has published dozens of influential studies, which are primary source of information about launching or operating CSO as well as about a condition of sector. Moreover, the Foundation has established a vivid online platform of Polish citizen sector with profiles of over 138,000 NGOs and 10,000 public administration institutions. Klon/Jawor Association's have subsequently been created by Ukrainian, Hungarian and Romanian partners to provide research on citizen sector in those countries.

To further build the CSO ecosystem, Kuba believed an integrated platform for communication was necessary. In 1998, he launched an online platform for CSOs. Today, the website is known as NGO.pl. At a time when the Internet was an unknown and expensive phenomenon, Kuba instantly saw its potential and paved the way to free website usage for viewers by negotiating payment on the hosting side. As of 2017, the platform had 3.9 million unique users who represent 10% of the Polish population.

Seeing the need for independent funding, in the 2000s, Kuba co-created two legal acts that provided the foundation for public donations, social economy (as economic activity of CSOs and social cooperatives) and volunteering in Poland. These two acts fundamentally shifted the landscape of CSOs by enabling them to become partially independent from grants and public funding sources. In 2016, Kuba took this ecosystem element further and created a coalition of NGOs, including five Ashoka Fellows from Poland, who launched The Civic Fund. The Civic Fund uses a citizen-based financing structure to support watchdog non-profit organizations with no chance of funding from populist government. In the first year, the Fund has already distributed 11 grants.

Kuba's latest development in the CSO ecosystem has focused on supporting the continuous evolution of new organizations via incubation. Founded in 2009, the Unit for Social Innovation and Research “Shipyard” inspires and incubates new social innovations. For example, Shipyard has unlocked urban big data, it is testing the implementation of Social Impact Bonds, and co-organizing the European Social Innovation Competition with the European Commission. Shipyard is named after the symbol of the Solidarity movement - the main workers’ strike took place in a shipyard in Gdansk - but it also refers to Kuba's aspiration for the organization. He hopes that Shipyard the organization will act like a real shipyard, where ideas and leaders are under construction and can become ready to sail off like ships. For example, The Dreamers and Craftsmen, a house of social innovations, is a unique space in the center of Warsaw where Shipyard provides a creative space for innovations to emerge and mature. To maintain its own financial independence, Shipyard operates with a hybrid finance model, supporting its own budget with fees for its research services. In 2016 alone, Shipyard has implemented 51 projects, of which 24 generated income. A sister organization is currently implemented in Ukraine.

Kuba has chosen a multi-pronged scaling strategy, mostly defined by himself as “working in between”, or “working at the seams”. He influences legislation, scales whole organizational models (such as the Klon-Jawor Association and the Shipyard), and inspires and supports sister organizations in Ukraine, Romania, Hungary, and Kazakhstan. Mostly, Kuba has scaled by diffusing his principles of CSO ecosystem development through the ecosystem leader approach. Kuba's ecosystem leader approach has five core elements: (1) Base actions on facts not assumptions; (2) Be powered by humility not brand (3) See value in cooperation not hierarchy (4) Create solutions that function as a node, not a hub and (5) Focus on achieving a mission, not strengthening or growing an organization. Kuba has mentored numerous leaders in this approach, both those leading organizations initiated by Kuba, such as Klon/Jawor or NGO.pl, and those who lead independent organizations, such as the Laboratory of Social Innovations in Gdynia. Further, Kuba spreads this approach within governmental bodies like the Public Benefit Council and Public Television Program Council. Finally, he spreads his mission as a member of executive boards of influential and global organizations that he chooses carefully, assessing where his impact would be the most significant e.g. CIVICUS and TechSoup.

In building the CSO ecosystem, Kuba has shifted Polish civil society from solely activism-oriented labor unions towards a multifaceted, resilient, and evolving citizen sector. Currently, he is focused on redirecting civil engagement from being negative, standing against issues, towards being positive, standing for values and civil practices. According to Kuba, the positive vector of civic activism contributes to an agile and smart citizen sector, which provides a strong base for democracy and freedom.

Kuba grew up in a prestigious district of Warsaw with two worlds: the Warsaw mostly Catholic intelligentsia living and thriving, and the military elites forced to be atheist and belong to the communist party. On his way to high school, he would often meet the two worlds and find that they did not know nor understand each other. He was engaged in the self-education movement as a Warsaw high school coordinator during communist times, an underground education system based on reading censored books and meeting with banned experts who taught the officially unapproved ideas and historical facts. Like many Poles in his generation, he has learnt one version of the worlds’ history at school and another at home.

In his early 20s he engaged in the Solidarity movement, first as an assistant of one of the three founding fathers of the Solidarity (Henryk Wujec). He was the youngest participant of The Polish Round Table Talks, conversations which precipitated and gave momentum to the relatively peaceful fall of the entire communist bloc in Eastern Europe.

Before the first democratic elections in Poland after the WWII, in 1989, Kuba was the walking example of “the strength of the weak link”, by collecting and distributing knowledge about each parliamentary candidate of the Solidarity, connecting candidates from the posters with those who distributed them. Through his work he contributed to the victory of the Solidarity movement. He received an offer to work in parliament, but it was in this moment he made the decision to not join the government but to instead invest in building and strengthen the civil society sector in the country.

Kuba has devoted himself to this goal ever since and has demonstrated impressive social impact, much of which has been widely acknowledged. For his work, he has received The Knights Cross (2001) and Officers Cross (2011) of Order of Polonia Restituta from the President of the Republic of Poland, Andrzej Bączkowski Award (1999), and Tischner Prize (2018). Kuba took part in the Yale’s Greenberg World Fellowship, as the first European (2002).