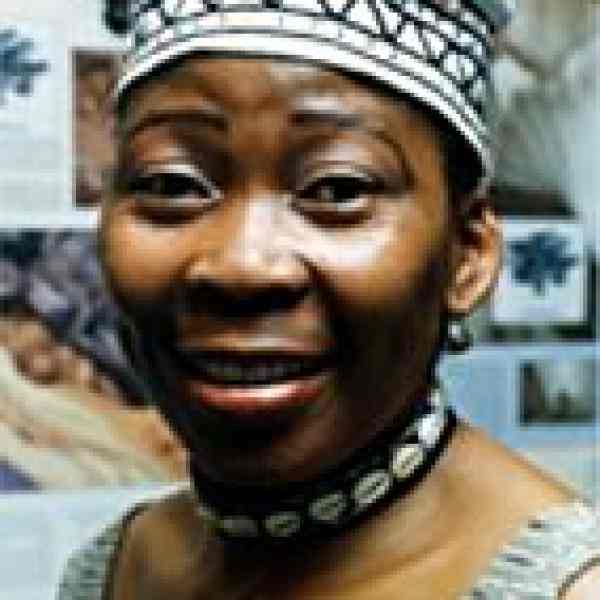 Gcina Mhlophe, a talented writer, actress, mime artist and singer, is fighting illiteracy through storytelling. She uses this important part of Africa's heritage to enhance identity and self-esteem while entertaining and educating.

Gcina's mission is to restore and develop Africa's stories and the art of storytelling-as an art form and educational tool. She collects stories from all regions of South Africa, which she presents at the storytelling festivals she organizes throughout the country. She works to restore the importance of storytelling in the life of the country and to develop it into a professional art form. Gcina expands on traditional storytelling through her development of characters, dramatization of stories, and use of handmade puppets, toys and masks. Her reliance on audience participation appeals to people of all ages and nationalities. She tells stories in four different languages to groups ranging from nursery schools to literacy organizations, teacher training colleges, universities and unions. She is also experimenting with recording, illustration, animation, and shadow puppetry, which she calls rural television. There is an enthusiastic and growing audience for traditional stories. All school libraries in South Africa now carry the English edition of one of her books, The Snake With Seven Heads, which has also been translated into five African languages. Literacy campaigns in South Africa also use her works. Gcina has shown that storytelling is a useful tool in reforming the current authoritarian teaching methods of South Africa. Storytelling engages both students and teachers in creative thinking exercises and can be easily applied to teach history, language, and communication skills.

Apartheid has effectively eroded the family, community structures, and cultural traditions of black South Africans. A century-old migrant labor system has created a "norm" in which women, children, and elders are left to survive in the barren countryside while young men migrate to the cities in search of work. The forced removal of 3.5 million black South Africans from their land since 1960 and generalized political and social repression have impoverished black South Africans materially and spiritually. Urban life, irrespective of its apartheid dimension, has also put stress on the traditionally strong African institutions of family and community. New pastimes such as video games, Bruce Lee films, "bubble gum" music, carried by powerful new media, hold sway. Mickey Mouse and the Ninja Turtles have long replaced traditional African heroes and heroines like the Queen of the Tortoises and the Snake with the Seven Heads. At recent auditions, most young singers knew more songs in English than in an African language. The schools have failed to introduce, let alone instill, a sense of pride in indigenous cultural traditions and values. Black education in particular has consistently undermined the morals, values, and lessons within African society and has reinforced debilitating assumptions of European superiority. The "lost generation" of township youth that stayed away from school to carry on the revolution has lost even the little the schools do have to offer. Even in the rural reserves, traditional culture, including storytelling, has suffered. Women and their children, left alone to fend for themselves, spend most of their days and nights making provisions for water, fuel, and food. In the urban areas, storytelling has increasingly come to be perceived as antiquated. Despite all this, the storytelling tradition lives on. Gcina has begun to demonstrate that storytelling carries an enduring power to delight and to educate. Her challenge is to adapt and apply the storytellers' enchantments to contemporary South Africa.

Gcina is currently establishing the Zanendaba Institute of Storytelling in Africa. Zanendaba is a Zulu word meaning, "come with the news" or "tell me a story." She will initially work with two institutions that she knows well -- the Market Theater, South Africa's major progressive theatrical establishment, and READ, a national literacy organization. Gcina has been a resident director at the Market Theater and coordinator of READ's storytelling programs and festivals. Gcina's first priority is to train a core of professional storytellers. She has already begun intensive training programs in Johannesburg and Pretoria. With a team of skilled storytellers, Zanendaba will be able to conduct in-house workshops, sending storytellers to organizations and schools upon request. Concentrating at first on training professional educators at teacher-training colleges, primary schools, and literacy organizations and schools upon request, Gcina later plans to include actors, unemployed workers, trade union members, and students. At the same time, Gcina will be building the resources of the Institute. Research into African folklore from all of Africa will be used to develop innovative African educational materials, puppets, and toys. Zanendaba will also host exchanges between storytellers from around the world and especially within Africa. Finally, Zanendaba will have regular storytelling performances and work towards the creation of an annual, national storytelling festival.

Thirty-three-year old Gcina grew up with her grandmother in the Transkei. She was greatly influenced by her grandmother's stories, which she still tells to this day. By training, Gcina is an accomplished writer, actress, director, and performer. She is a former Resident Director of the Market Theater in Johannesburg, and has toured Europe and North America to perform and conduct storytelling workshops. She has formal training as a journalist and filmmaker and has published three children's books, three plays, and numerous stories and poems. One of her books, The Snake with Seven Heads, has been translated into five African languages, and the English edition has been placed in all school libraries nationwide. Her autobiographical play, Have You Seen Zandile? is now prescribed work at three universities in South Africa. Gcina has worked with a major national literacy organization on literacy projects and organized a national outdoor festival of stories to celebrate the year of literacy and to promote storytelling as a teaching method in schools.