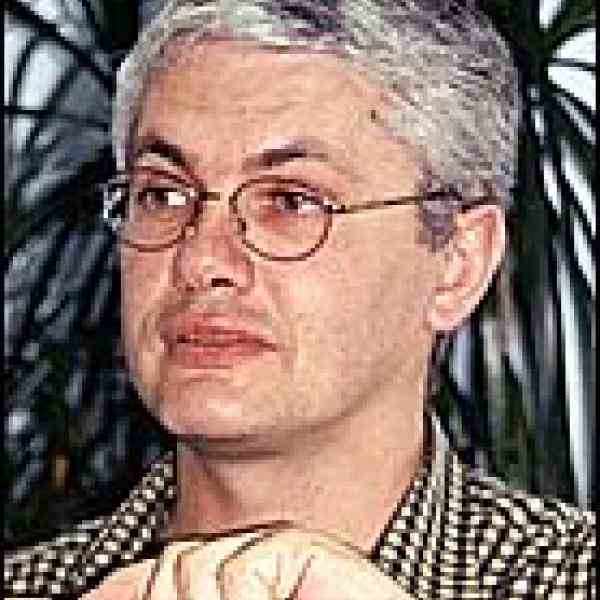 Ricardo Bertolino (Argentina, 1998) is training youth to become leaders within their communities through an ingeniously simple model that engages them in the solution of one of Argentina's most pressing problems: waste management.

By seizing upon the environmentally important problem of urban waste disposal, Ricardo Bertolino has launched a vibrant youth movement that effectively addresses this and other quality-of-life issues while at the same time preparing a new generation of leaders to take responsibility for their environment and their communities, and to mobilize others to do the same. The nucleus of this movement is a growing network of "Ecoclubs," participatory youth organizations whose members become the protagonists of efforts to preserve natural resources and promote sustainable development within their communities-starting from the problem of waste management. One club may organize a neighborhood clean-up and tree-planting campaign, while another club may mount an effort, using posters, flyers, and workshops, to educate families about proper composting techniques.

Unlike many other youth organizations, Ecoclubs are microcosms of democracy in action, with equal representation of boys and girls. Each local Ecoclub convenes regular meetings, elects leaders to represent it at the provincial and national Ecoclub assemblies, and collectively determines what types of environmental preservation and community-improvement activities to pursue. To carry out those activities, the Ecoclubs then engage the support of a wide range of actors, including municipal authorities, businesses, universities, schools, church groups, volunteer fire departments, and other non-governmental organizations.

While garbage collection is a reliable service in most cities of Argentina (daily in the largest cities and every two or three days in smaller ones), it is not selective. In some cases, aluminum and glass are separated for recycling, but for the most part the garbage-including biological waste-is deposited en masse, untreated, in municipal dumps where insects, vermin, and stray animals abound. Larger cities such as Buenos

Aires, Rosario, Córdoba, and Mendoza use private landfills, most of which, according to Ricardo, are improperly run. Small and medium cities, in turn, use open-air dumps. Without proper regulation and maintenance of these sites, pollutants work their way into the water supply and air contamination worsens.

Because there are neither national nor provincial initiatives to educate the population about the problem of waste management and involve them in finding a solution, responsibility has been delegated de facto to the municipal level, largely in response to demand from the local community. Although municipal authorities throughout Argentina have demonstrated the willingness and resources to tackle the problem of waste management, an absence of viable solutions has left it unresolved; they simply do not know where or how to begin. Of the 1,922 municipalities in Argentina, nearly 97% lack effective waste management programs.

Waste reduction and recycling campaigns carried out by ecological groups have met with little success in Argentina, and the population remains largely uninformed about how simple, everyday actions can help reduce or reuse waste. As Ricardo describes, "each day it becomes more difficult to justify not treating wastes to a population that is increasingly concerned about the preservation of their environment and the improvement of their quality of life." Meanwhile, Argentine youth, like many of their counterparts in other democratic nations, lack early exposure to and practice in democratic leadership. They are not encouraged or expected to take part in their communities, aside from the traditional role as children and students. To this point, they have certainly not been specifically challenged to respond to local problems like waste management.

Ricardo began his initiative by drawing on his long experience with youth groups, as well as his technological understanding of waste disposal. Each Ecoclub is formed at the initiative of students who share a commitment to improving the quality of life in their communities, starting with the problem of household waste. Students hear about Ecoclubs either by word of mouth-from friends or relatives who have participated in Ecoclubs in other communities-or at school presentations about waste management led by Ricardo and others. Ecoclub members meet weekly to organize activities on topics such as waste treatment, environmental education, organic gardens, the protection of flora and fauna, and alternative energy use. The youngest members of the groups (those between the ages of ten and fourteen) are taught about environmental issues by their older peers in self-organized "Ecological Workshops."

As part of the waste management program, Ecoclub members travel house to house and teach families how to separate their organic wastes. These wastes are deposited in special plastic containers and collected three times per week by the municipality. Next begins the campaign to collect paper and cardboard materials. Schools that participate in the campaign as deposit sites are then able to generate income through the sale of the paper and cardboard. To further encourage the recycling of these materials, the Ecoclubs carry out a monthly campaign whereby households that have collected three kilograms of paper and cardboard are given one free kilogram of compost to use in their gardens and yards. Finally, each household is provided with "blue bags" in which to discard their plastics, metals, and glass products. These receptacles are picked up weekly by municipal authorities, who use the income generated from the sale of these recyclable products to subsidize their waste management program. To make the process easier, Ecoclub members provide households with a simple list of which wastes to separate, how to dispose of them, and when they will be picked up. The number of families participating in the Ecoclub-led waste disposal programs, thanks to the training provided by Ecoclub youth, grew from 400 to 25,000 between 1993 and 1998. The quantity of organic waste collected has risen from 80,000 kilograms in 1993 to nearly five million kilograms in 1997.

Beyond their waste management efforts, in order to raise awareness of environmental issues and mobilize community participation, club members regularly make presentations at local schools and other community organizations, put on theater productions, write press releases, participate in television and radio interviews, submit articles or content to newspapers and magazines, and distribute posters and flyers. A quarterly Ecoclub newsletter, "The World We Create," is distributed throughout the Ecoclub network and includes stories written by and featuring club members.

To provide opportunities for practical experience in democratic decision-making and leadership, each Ecoclub forms part of larger network. After electing its own Local Board, for a term of six months so as to allow for rotation of leadership, each Ecoclub elects delegates to the Provincial Assembly which meets twice per year to share experiences, review the provincial Ecoclub statutes, evaluate activities, and elects representatives for a one-year, non-renewable term to the Provincial Board. Starting in 1998, each Provincial Board then elects delegates to the National Board.

This organizational structure, which Ricardo envisions as expanding to include a Regional and perhaps someday International Board, easily accommodates the creation of new Ecoclubs in Argentina and beyond, with the youth themselves as multipliers of the model. However, Ricardo recognizes that the simplicity and popular appeal of the Ecoclub model can also be its vice: Ecoclubs may be started which do not adhere to the mission of the original clubs or that take advantage of the goodwill of youth by involving them in waste management and other environmental tasks that are actually the responsibility of other entities. To protect against this diluting of the Ecoclub model, Ricardo is in the process of copywriting the name.

Because the Ecoclubs are able to carry out such a vital role-as community educators and organizers-in the resolution of waste management problems at the local level, municipal governments have been more than willing to fund their activities. Ricardo serves as an advisor to municipalities interested in implementing the Ecoclub model. From the creation of the first three Ecoclubs in the province of Santa Fe in 1992, the model has spread quickly to other communities throughout Argentina. By the end of 1997, there were 42 Ecoclubs in six provinces. Club members were invited in 1998 to share their experiences with schools and other groups in six additional provinces. The province of Buenos Aires, with support of the W.K. Kellogg Foundation, recently invited Ricardo to advise them in the creation of Ecoclubs in greater Buenos Aires. By mid-1998, over 1,200 youth were participating in the Ecoclubs-60% between the ages of 10 and 13, 35% between 14 and 17, and 5% over the age of 18.

The Ecoclub model is also gaining attention outside of Argentina, paving the way for what Ricardo hopes will soon become a regional and then international network. Through partnerships with like-minded organizations, additional Ecoclubs and associated waste treatment plants have sprouted in the Chilean city of Tome and in the cities of Santiago and Atalaya in Panama. In 1997, representatives from Costa Rica, Honduras, Peru, El Salvador and Ecuador traveled to Argentina to learn about the Ecoclub model. In September of 1998, with support from the Dutch organization WASTE, Ricardo shared the model with representatives from Africa and Asia. Through a partnership with the Pan-American Health Organization, Ricardo will continue to share the Ecoclub experience with municipal authorities and non-governmental organizations from throughout Latin America.

Youth leadership and community involvement are nothing new for Ricardo. He recalls that ever since he was a child, he has assumed leadership roles in the groups of which he has been a part. In elementary school, he was regularly chosen as "Best Classmate" and selected to represent his peers on various committees. Raised in the Catholic church, he became involved in high school with the local chapter of Catholic Action, where he was soon elected president of the youth group and helped lead community service projects, recreational activities, and summer camping trips.

Upon graduating high school, Ricardo began studying agricultural sciences at the National University of Rosario. Midway through those studies, he decided to return to his Catholic roots and enrolled in Seminary. After a year and a half there, he became disillusioned and returned to the university to finish up his degree in agricultural sciences. He resumed his involvement with church-based activities, through which he formed a group of young people devoted to studying the social doctrine of the Catholic church. He organized the group LUCHA at his Faculty and was later elected president of the youth division of a local political group.

In 1991, Ricardo co-founded and began serving as president of the Center for Environmental Study and Action, through which he has developed the Ecoclub model.