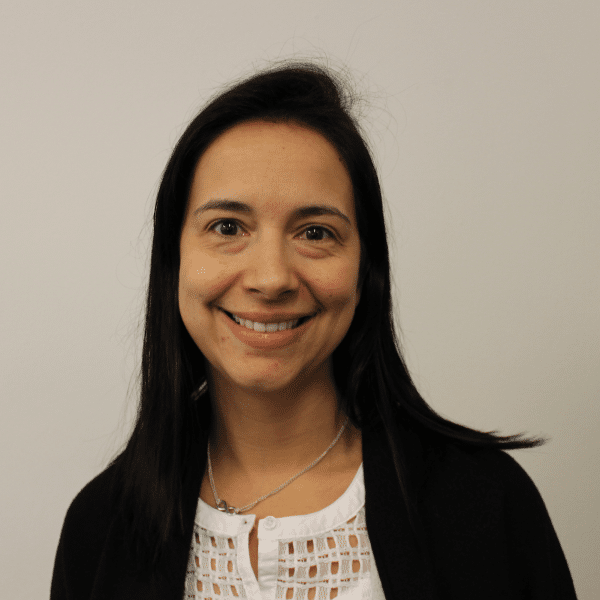 Through her integrated model she frees children and offers them a safe and peaceful childhood; this is achieved through her high quality methodology, sustainable and highly replicable which empowers teachers to develop affectionate relationships. Nathalia is building a new ecosystem with new mentality about the importance of the 1st childhood where the needs of children are in the center, involving the State and also empowering parents and the community. Nathalia’s solution does not only has a direct impact on the school, but also opens the possibility of claiming households as a family institution in a highly violent environment.

Nathalia creates the aeioTU educational model for comprehensive care in schools (educational, infrastructure and management) that is self-sustaining, for children in early childhood (0- 5 years old), focused on playful learning of high quality and low cost. She makes the access, to high standards of educational quality, to children of limited opportunities affecting the closing the cognitive and nutritional gap and integrating the community. Her innovation is integral, Nathalia designs the architecture of her centers, spaces, and develops a pedagogy starting with the creative process and empathy among children; she uses innovative art and free play starting with exploration and turns into an investigation.

Nathalia, involves parents and teachers, where teachers become agents of change, they leave the centers and go to homes, to work with pregnant mothers and affect the family context, in many cases, highly violent. In addition, she replicates her methodology in other early childhood centers and uses her digital platform as a place of formation and multiplication of their practices.

Nathalia has supported the Colombian national government and several mayoralties to develop their Early Childhood Public Policy. Nathalia is part of international networks in defense and promotion of early childhood, and intends to turn her model into a public good, especially towards schools in Colombia and throughout Latin America. Nathalia dreams to influence in a regional model that improves the early years of basic education, for which ASHOKA would give her the possibility of being part of a network with a new vision of empathic children, future Agents of Change. Nathalia, in turn, is a natural leader to carry out these cultural transformations in tune with the new paradigm.

In Colombia, the infrastructure to provide high quality educational services for early childhood is inadequate and weak, thus allowing social inequality be perpetuated. More than half of the children in Colombia are poor - about two and a half million children- and the Government has recently established a policy to increase quality coverage with comprehensive care. Service is currently provided to a million and a half children, leaving still one million children to be attended. Furthermore, a large majority of the million children who are being cared for, are with low quality operators that require educational and operational strengthening. It requires the development of early childhood cluster throughout the country in order to better serve the children of Colombia. The barriers that have prevented solutions include financing problems, lack of knowledge on the importance of early childhood education, lack of model, lack of evaluation and lack of local materials and tools.

Colombian children end up being trapped in a pattern of inequality, lack of all kinds and cognitive deficiencies, low in height and weight due to poor diet, reproducing poverty to future generations, others susceptible of crime, gangs, drug trafficking and guerrillas since very young.Nathalia develops her own model with several innovations. In its exploratory phase before starting aeioTU she takes the principles of the philosophy of Reggio Emilia, focused on the child as the learning protagonist and then, from her own experience, develops her own methodology with materials, educational curricula and teacher training model. One of her innovations is the Architectural Prototype of her Center, very inexpensive, to scale both in Colombia and in any country in the world, with a digital platform with training models to offer aeioTU training programs.

In 2007 Nathalia envisions the aeioTU http://www.aeiotu.com/ educational model and a year later, in 2008 implements it as Executive Director of the Carulla Foundation, with the purpose of promoting education in Colombia. As part of her Staff has a Board of Directors integrated by 7 members (1 President and 6 Directors, all pro bono), an Executive Team with 4 Directors (Nathalia as Executive Director, an Administrative and Financial Director, a Director of Education and a Director of Alliances), and Communications Coordinator. She has 50 paid employees that support the 3 areas and 100 volunteers. Then, about 1,100 people work in the 28 centers and 7 Offices in the different departments. Nathalia operates in the departments of Cundinamarca, Valle, Chocó, Antioquia, Magdalena, Atlántico, Bolívar, Cesar, Córdoba, Guajira and Sucre. For Nathalia, her team with mystique, dedication and passion make it possible for her every day dream to reach more children in Colombia.

Nathalia developed the tracking software Conectu, which has 2 modules: Education Monitoring, with indicators of child to child development in six dimensions: cognitive, social-emotional, physical, communicative, cultural, creative-sensory and Management monitoring, which monitor infrastructure, equipment, talent. She also involves the parents with workshops and gathers impact indicators of this. Additionally, Nathalia received funding so Rutgers University and the University of the Andes would make a random external evaluation for 1,200 children in Santa Marta (the only one in Latin America) – where the effects of the aeioTU program have been proven: the closing of cognitive gaps evaluated in 20 months: vocabulary development and improvements in size and weight.

Another of her innovations is the educational curriculum (unique in Colombia) that gives access to the child to open material. Promotes free play in the classroom, where the children in small groups develop critical thinking, self-esteem, creativity, leadership, teamwork, empathy, respect for traditions, develop healthy eating habits, culture of peace and conflict resolution. Sensory areas; the development of sensory integration through art, music, light and shade, the vegetable garden, body language, among others.
Empathy is promoted in the classroom involving impaired children, where children sponsor and support those who have problems. Such is the case of Oscar, who, receiving the support of his classmates, in addition to his classroom work, significantly improved his verbal and cognitive skills; he also served as team integrator. (http://www.aeiotu.com/aeiotu-en-accion/).

Nathalia impacts not only in the centers but incorporates and builds a community network system and strengthening of the families with the Program, where teachers play a fundamental role as agents of change. One of her programs is: The traveling Teacher, who goes to the house of unborn children, where the teacher works with the pregnant mother and the family at home, and creates a space for the new baby on education, nutrition and health issues. Then the mothers go to the Center and enroll, they get together and meet in the center, and so, Nathalia ensures the successful development of the child before birth.Nathalia met with the community mothers, babysitters, and decided to train them and incorporate them. The aeioTU, starts with a commitment and consensus with the family. A teacher has 15 children, she has time to visit the family; at the end the quality components aim at improving relations. The challenge for aeioTU is not only the mother but the family and the community. Complexities are handled when parents are criminals or abuse their children, consequently a complaint is filed. Nathalia works the integration with parents to resolve conflicts. In Bogota and Medellin, children from guerrillas and paramilitaries arrive, consequently, teachers have to create spaces for peace.

Nathalia represents in Colombia Pro-reading where public policy is supported and receives mentoring from Harvard. In 2012, she replicates her model in Mexico (Government of QuintanRoo), 2 Centers. Currently in Brazil she has been working, during the past four years, with the Mayor of Rio de Janeiro, where she has trained more than 400 teachers, and in Panama she is starting the construction of Centers on the outskirts of the capital with the ALAS Foundation.

In 2015 she obtained the ISO 9001 certification by Bureau Veritas. This means that she has all her methodology systemized and ready to replicate. Likewise, that same year, thanks to the partnership with the Multilateral Investment Fund (FOMIN) of the Inter-American Development Bank (IDB) she succeeded that the International Center for Social Franchising (franchise) advised them into replicating their model. Today she suggests that the best replica option is the open source.

For 2015 she developed a great pilot where they have trained, for free, through 7 Offices, 3,000 educators impacting 50,000 children, to also create a network of teachers. These teachers are in 315 Centers in the Caribbean Coast (7 departments in northern Colombia), with of 5 days of training workshops (Saturdays) 40 hours and then twice a month to motivate and empower. This pilot has been evaluated by the Faculty of Education at the University of Los Andes, which has enable to carry out diagnostics with positive impacts, to continue towards its new stage.

The way it is supported operating in centers that are in the high-class market of Bogota to generate revenues to help subsidize the other centers in vulnerable communities, besides having the sponsorship of other institutions. It is important to highlight that her model also affects the sustainability of the Centers in vulnerable areas, these are funded by the public sector, but good management ensures its sustainability over time, otherwise they tend to close their doors.

For 2016 her goal is to: Create the aeioTU Institute to train teachers, 5 of the 28 Centers will be transformed as Professional Development Centers, and continue serving the children. Create 350 more Centers, including 150 from the previous phase totaling 700 centers to reach approximately 100 thousand children and thus, replicate her methodology.Nathalia plans to be present throughout Colombia in 10 years and influence a regional model. She dreams that these early childhood Centers become centers for building citizenship. For this, the issue of public policies is key to motorize and promote sustainability; she wants that her replica be planned through open source model.

She lived her entire childhood with great joy, but immersed in a drug war in Medellin, in a fragmented community, without rights or freedoms. Her father was a businessman, an innovative civil engineer, influential in Medellin’s infrastructure and her mother a housewife dedicated to the kitchen and today with her own website ‘salypimienta.com’. As a teenager, she had friends that were kidnapped, close people entering the drug trafficking business and even witnessed the Oporto Massacre, which left her deeply shocked when she realized that she could have been among the corpses she saw on the streets the following days.

At the age 14 she began working as a volunteer in Pro-Antioquia, and planned activities in the communes. She also volunteered in nursing homes, kindergartens. At the age of 19 she began studying economics for her need to influence in the development and freedom of the human being. After college she moved to the Atlantic Coast and worked in education for a year, but had to leave due to paramilitarism. This coincided with her husband moving to Costa Rica to do a post-graduate. At the age of 24, she works as a volunteer at the NGO Center for Thought. She went to the Latin American Center for Competitiveness and the Sustainable Development, which then became the INCAE (School of Business Institute), to analyze value chains for integration in the field of ecotourism development models. During this time her father was kidnapped, who fortunately escaped, but it changed the lives of her family; her family lost everything, and took refuge in his home in Costa Rica; this was their previous training to learn how to influence in more systemic changes, in deepening their interest in working for freedom, forgiveness and mourning.

Nathalia started working at the age of 28 with AVINA, and for 8 years she meets and supports leaders and social businessmen in Latin America and the world. In 2004, she decides to quit AVINA and return to Colombia and begins to meet with social ecosystem actors. In 2007, she was invited to initiate and direct the Carulla Foundation as a legal representative. After analyzing worldwide educational models, she created the Educational Model aeioTU – she chose Early Childhood due to its importance on their first years of life.