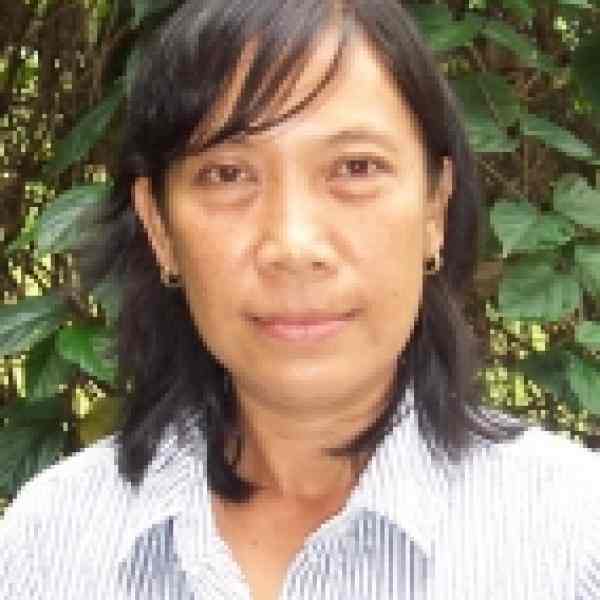 In a country where rice has been the staple food since the national rice program was introduced during the Suharto regime in the 1980s, Maria Loretha strives to decrease the dependency on rice and replace it with local crops that have higher nutrient content and are easier to grow in the dry lands of Eastern Indonesia.

Maria has recovered local knowledge that has been missing for more than thirty years by reintroducing crops such as sorghum, jewawut (millet), jelai (barley), red rice, black rice, and corn, local foods that are more nutritious than rice. These crops were uprooted during the national rice movement, which greatly contributed to the malnutrition issues faced by Eastern Indonesia for many years. The low inputs these crops require are ideal for dry land, and they can be harvested up to three times a year, unlike rice, which can only be harvested once a year due to soil conditions.

Maria is learning about changing climate conditions and understands that promoting local food security is part of surviving these changes. She believes that by maintaining local food diversity, island communities are able to be resilient against inconsistent food supplies from outside their regions. Together with the government, Maria is starting a national movement for sorghum and other local alternative food that is built on small farmer’s organizations at the grassroots level. Farmers’ organizations are based on local self-sufficiency, knowledge sharing, mutual support, and an inter-island knowledge sharing network.

In 2007 Maria began traveling from village to village in Eastern Indonesia in an attempt to find local seeds that have been missing for many years. She has managed to collect ten of the thirty varieties of sorghum seeds and many other local seeds. Maria is now building the independent capacity of the small farmer’s groups to recover and disseminate knowledge about the local seeds, thus turning the farmers into innovators.

The national high yielding rice movement that was introduced in the 1980s during the Suharto era turned out to be a disaster for dry land farmers in Eastern Indonesia. In the Western parts of Indonesia, where there is constant water supply and rain, rice can be harvested up to three or four times a year, while in Eastern Indonesia due to the lack of rain, it can only be harvested once a year, which also lowers the quality of the harvested rice. This movement has caused the disappearance of nutritious crops such as sorghum, red rice, black rice, jewawut and jelai. Rather than having a variety of crops, the government urged farmers to grow only one. This has led the government to have tremendous control over the crops and also the inputs involved, such as fertilizers and pesticides that need to be ordered from outside eastern areas; leading to government corruption over the inputs involved.

As the system continues and the rice movement is no longer enforced, farmers are free to grow what they want. The government has even started a movement, “Go Local” and “No Rice Day” to support the local food program, but it has been inconsistent and without traction at the grassroots level. What farmers continue to see is the existing rice program, in addition to a government partnership with big companies to encourage the planting of transgenic corn; in an effort to show support to food other than rice. However, transgenic corn does not grow well in Eastern Indonesia and the inputs to grow it are controlled by the government. In the end, the farmers had to grow corn, sometimes with government support, but most of the time without it.

Even as the government encourages people to eat local food, they have not taught farmers what to grow and how to grow it. While they introduced the transgenic corn, local corn was never made a part of the food movement. The farmers are left to recover their seed patrimony and to find the low cost, high nutrition varieties they used to cultivate. Most of the elders in villages still have some seeds and the knowledge, but the farmers have not grown these plants for a long time. The knowledge is lost to farmers and will be forever lost to the next generation if these practices continue.

Maria was first introduced to sorghum during Indonesia’s 1997 economic crisis. A neighbor sent a bowl of sorghum porridge to her new home in Adonara, East Nusa, and after her first taste she set off on a quest to find the missing sorghum seeds. Maria traveled from village to village until she managed to collect ten of the thirty seed varieties. To collect more, she frequented local meet ups in East Nusa Tenggara to exchange seeds with farmers and recover lost knowledge on local crops. Maria had the seeds and knowledge, yet she knew it would be difficult to convince farmers to grow them. Maria realized that as a farmer herself, she had to set the example. Though Maria cut down most of the cashew and coconut trees on her husband’s land, the farmers were convinced when they saw how easy they were to grow in a short time. After her first harvest, Maria started handing out free seeds to farmers, teaching them how to tend and harvest the crops. She also approached the women in the farmers’ group, teaching them how to plant the crops, and food preparation. Maria has over 1,000 farmers in her farmers’ group Cinta Alam Pertanian (Love for Nature Farming).

To get more people excited and involved in the local food movement, Maria’s brother helped her make a YouTube video about the different varieties of sorghum and its nutritional value. She also approached a highly regarded local bishop to make local food the theme of the following Easter. Using her church network, Maria was recently invited to the national meeting of bishops in Jakarta. She talked about the importance of the local food movement and gained crucial support from the Catholic Church. Maria then approached the government. After approaching the provincial government, which proved to be unsuccessful, Maria was not discouraged. She instead approached the national government in Jakarta, who already had a national movement for local food, “Go Local,” but who unsuccessful at the grassroots level. Maria persuaded the national government to launch a community movement in February 2013 under the auspices of the national movement, introducing missing local crops such as sorghum and other varieties. To support this movement, Maria reached out to farmer’s organizations on other islands. She has been invited as a key speaker in several events all over the nation where they are trying to promote alternative local food and crops. Using her position as Chairman of the Board for the Indonesian Farmers Alliance for Eastern Indonesia, Maria hopes that her work can reach a larger population with her movement.

Maria started a pilot project in Kalimantan and Halmahera for farmers to grow local varieties available in the area, but to also plant the seeds she has sought, enabling the farmers become innovators of their own local crop variety. In each of the areas, a key person is appointed to head communication, knowledge sharing, and network building so that each farmer has the support of other farmers’ groups; creating an inter-island knowledge sharing network. In the future, Maria will start a sorghum seed bank and build a sorghum mill in East Nusa Tenggara; the first in Indonesia.

Maria is the eldest of five children. Her father’s job as a judge took her family to many cities around Indonesia. Her mother was a housewife who taught her children traditional dances and told them local stories. Maria spent her childhood in Ketapang, Kalimantan, where she used to roam the forests on her own. After work, her father took the children to their farm and taught them about farming. At a young age, Maria was an excellent farmer, hunter, and fisherman. When she reached junior high school, her father sent her to study in Java. Even after the whole family moved to Jakarta, her father never took them to holiday destinations, instead he gave them farming projects on the little land that they owned. Inspired by her father’s career as a judge, Maria studied law at Merdeka University in Malang, (where she met her husband). After graduating from law school, instead of becoming a lawyer or judge like her father, Maria became a radio announcer at a local radio station, and learned how to talk to the public.

In 1997 both Maria and her husband lost their jobs. They decided to go back to her husband’s hometown in Adonara, East Nusa Tenggara. They stayed in Larantuka, one of the big cities on the mainland for a while because her husband did not want to go back to Adonara as farmers, where his family owned 6 hectares of land. After a while, Maria realized that living in a city with no job and money was not the answer to her problems. She packed her bags and left with her children to work on her husband’s land. After being apart for three months, her husband agreed to join her and since then, they’ve worked their land together.

In 2007 Maria received a plate of steamed sorghum with grated coconut from a neighbor. She fell in love with the food and tried to find seeds to be able to cultivate it. She finally found them in Ile Bura district, Flores Island. She bought 10 kg of sorghum seeds for Rp 150,000 (US$15). Since then, sorghum has become her obsession. Maria has traveled to find and distribute seeds around East Nusa Tenggara, but does not sell them. She uses them for her family or gives them to farmers along her travels. Maria describes her journey to introduce sorghum as “returning home.” She won East Nusa Tenggara’s 2011 Academic Award for science and technical innovation and the Kehati Award 2012 for her persistence in conserving biodiversity. Recently, Maria appeared on national television to discuss her work conserving and promoting local seeds.