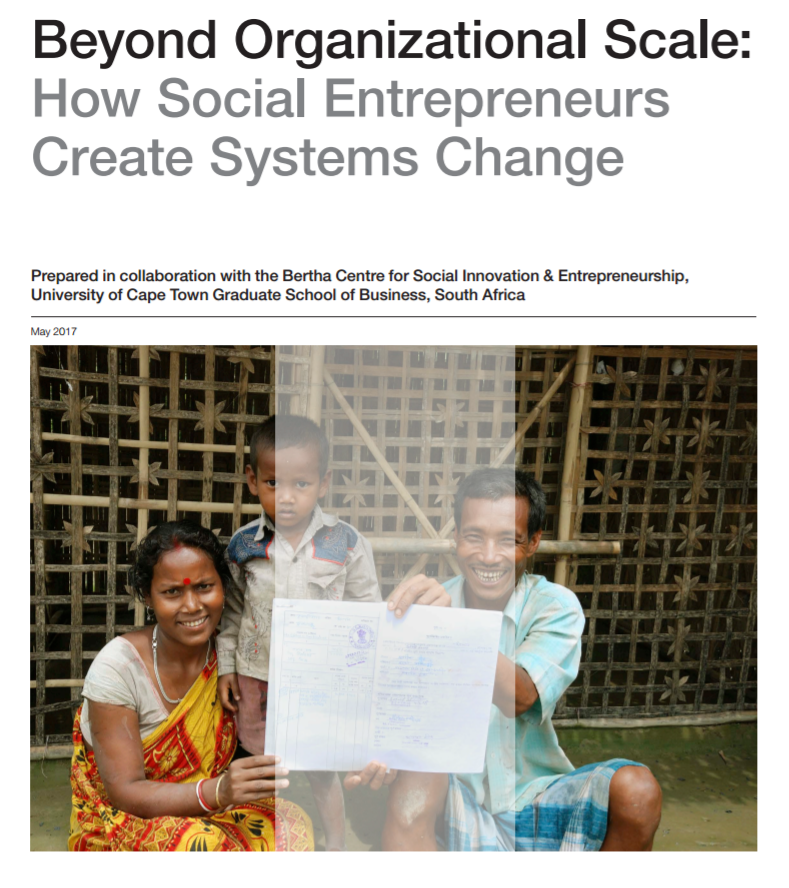 A new report recommends that social entreneurs who want to increase their impact beyond the limits of their organization’s ability to grow should: 1) embrace complexity and adaptability, 2) build their evidence base, 3) create, convene, and coordinate coalitions, 4) engage government, and 5) shift systems with humility.

Beyond Organizational Scale: How Social Entrepreneurs Create Systems Change presents an insightful report on how social entrepreneurs are “fundamentally, and on a large scale, changing the way a majority of relevant players solve a big social challenge, such that a critical mass of people affected by that problem substantially benefit.” It was published by the Schwab Foundation for Social Entrepreneurship in collaboration with the Bertha Centre for Social Innovation and Entrepreneurship at University of Cape Town Graduate School of Business.

While systems change takes many different forms and paths, the lessons from six case studies in the report are consistent with the approaches many of the Ashoka Fellows in Ashoka’s global network, composed of more than 3,200 of the world’s leading social entrepreneurs, pursue.

Ashoka was founded in 1980 on the simple insight that there is nothing more powerful than a system-changing new idea in the hands of a leading social entrepreneur. As the Schwab Foundation’s report rightfully points out, system change is distinct from delivering products and services or improving the efficiency and scale of such delivery.

Systems change involves changing the participants, rules, or goals of the game in a lasting way. It is this kind of system-changing innovation that empowers truckers to become witnesses of human trafficking in an industry often blamed for complacency (Ashoka Fellow Kendis Paris), enables companies to value the unique skills of people with autism (Ashoka Fellow Thorkil Sonne), and ensures the water management system in rural Mexico realizes the right to access potable water for everyone (Ashoka Fellow Fermin Reygadas).

Now more than ever, it is critical to accelerate the pace at which society spots, supports, and connects system-changing new ideas and the entrepreneurs who have the ability and commitment to realize those ideas. The problems we face today -- be it environmental destruction, poverty, human rights violations, or inadequate healthcare -- are complex, increasingly interconnected, and often beyond the capacity of any one organization. System-changing social entrepreneurs and insights from their innovations help society move towards the good of all.

Equally importantly, successful leading entrepreneurs change systems by nurturing, enabling, and working with other changemakers. They make their ideas as simple and compelling as possible, so that those who are most affected by the change see the value and take the ideas on.

Leading social entrepreneurs let go of their control over the ideas and break down the walls around their organizations so as to spread their ideas and grow impact. In many ways, the system changing journey of leading social entrepreneurs shows us how to lead in a world where everyone makes change and everyone leads - a new strategic reality that each one of us has to navigate.