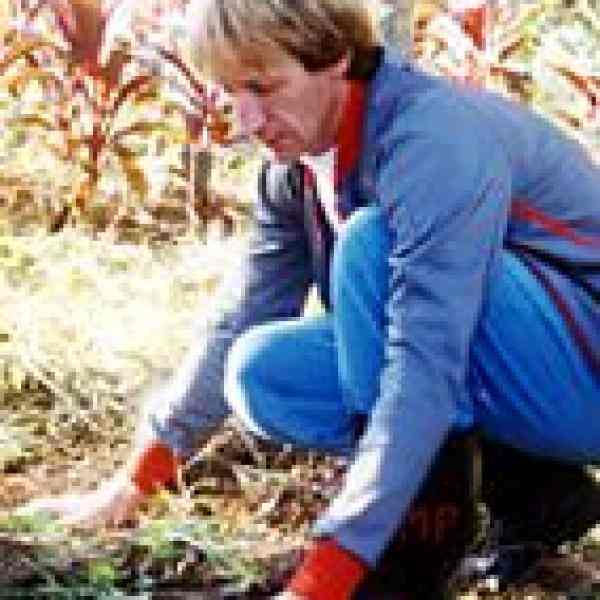 Wigold Schäffer is developing, demonstrating and testing a new model for the operation of small farms that reconciles the preservation of secondary forests and attendant biodiversity with farmers' desires for higher incomes and improved quality of life. Combining native species reforestation, the enrichment of remaining forests and organic farming techniques, his model offers a particularly promising approach for sustaining, or even enhancing, farm earnings while meeting environmental preservation and sustainable development goals.

The Atlantic rain forest ecosystem is one of the most important and complex on earth, embracing tens of thousands of species of flora and thousands of species of fauna. But it is gravely threatened, in part because its remaining secondary forests are considered of no importance or value by landholders. Wigold Schäffer's goal is to give new value to those forested areas by providing small farmers with new options for their use through the introduction of species such as mate (Paraguay tea), hearts of palm and ornamental plants.Wigold's approach begins with the principle that the diversification of activities (tree planting, fruit and livestock farming) will produce greater economic stability and increased earnings for farmers in the middle term, while providing better living conditions and landscape features for the rural properties. His project's central idea is a production pattern for small properties in which secondary forest preservation is compatible with productive economic activity.Wigold is seeking to demonstrate both the environmental importance of the forests and their short-, middle- and long-term economic potential for small farmers. He believes that, once farmers begin to recognize the importance of forests and enjoy their benefits, they will then be eager to protect them.

In less than a hundred years the nonindigenous population in the once thickly forested Upper Itajaí Valley has grown from zero to approximately 300,000 inhabitants, according to the 1991 census. Several towns and villages have been built, with populations now ranging from 2,000 to 60,000 inhabitants. This "progress" has resulted, in less than a century, in the destruction of 90 percent of the forests, the pollution of 92 percent of the rivers and streams with pesticides and chemical and organic waste, the loss of much of the region's fauna and a drastic reduction in the fertility of the soil. The centuries-old phenomenon of flooding that periodically affects the entire valley has also been exacerbated, as the consequence of a drop in water infiltration in the soil and sedimentation of water courses&#150;direct results of clearing forests and poor soil use.Today, the rich, complex and important Mata Atlântica ecosystem is one of the most threatened on the planet, with only five percent of its original area untouched. In Santa Catarina State (in southern Brazil), this forest once covered 85 percent of the territory. Now only sixteen percent of the state's primitive vegetation, ranging from the sparse woodland to the last remnants of the primary virgin forest, has survived. The prevalent farming system, which favors large estates and agrochemical and export-oriented timber industries, has strongly contributed to the destruction that has occurred. The best tree species have already been exploited, and most of the sparse woodland and secondary forests that remain are on private farmland and are not designated as forest reserves.The original secondary forests and sparse woodlands in recuperation from natural processes are endangered because both farmers and timber, ceramic and furniture merchants are almost unanimous in believing that such forest formations have no economic value. Environmental destruction, principally of the diminished forest cover, has now reached a critical level, and there is an urgent need both to preserve what forest still remains and to begin a process of ecological management that will enrich and recuperate areas degraded by timbering or farming activities.

Wigold began his struggle in defense of the remaining forests in the region of the Upper Itajaí Valley in the early 1980s by denouncing egregious acts of environmental destruction to the authorities and speaking about environmental issues in schools. It soon became clear to him, however, that isolated, voluntary efforts would have little impact on the ongoing processes in which important natural resources were being rapidly destroyed. In 1987, therefore, with the intent of developing a new approach and backing it up with institutional support, Wigold founded the Association for Preservation of the Environment in the Upper Itajaí Valley with the help of some friends.Wigold's initial strategy was to set an example for small farmers by collecting seeds, producing seedlings and planting native trees on his own land. Using his own funds, he planted a seedling nursery in which, until early 1993, all the work of collecting, caring for and planting the seedlings was done by Wigold himself. In that year, when the production, distribution and planting involved some 15,000 seedlings, the nursery was taken over by the Association, and today it has the capacity to produce 200,000 seedlings per year of more than 70 species.In 1993, Wigold also launched a pilot reforestation experiment to develop a land-use methodology that would later be disseminated to other farmers, landowners, and forestry specialists in the region. In mid-1995, he succeeded, through the Association, in forming a partnership with the Van Melle Brasil Ltda., a company headquartered in Holland with a subsidiary in São Paulo state. The company donated a utility vehicle to the project and is financing, for an eighteen-month period, three workers who are responsible for planting 70 hectares (150,000 seedlings) of trees on properties whose owners are interested in copying the model developed by Wigold on his own land.Until 1995, Wigold worked as a farming credit inspector for the Bank of Brazil in the Upper Itajaí Valley region, but in that year he decided to leave that job in order to devote his full time and energies to the project's implementation. Thus "liberated," he turned his full attention toward two critical components of his longer-term strategy: (1) the completion of a model (fourteen-hectare) property that is used for visits, environmental education and diffusion of technology, and (2) working directly with communities in offering environmental education and extension courses that provide information about organic farming and reforestation techniques using native species. Through the Association, he is also producing a related series of textbooks and newsletters.

The son of small farmers, Wigold lived and worked in farming with his parents until he was sixteen years old. He then went to live and work in town so that he could receive further education.From 1980 until l995, as an employee of the Bank of Brazil, he visited some 6,000 farming families in ten municipalities in the Upper Itajaí Valley. Those contacts exposed him to the adverse impacts of the farming model that was being encouraged and promoted by the Brazilian government and Bank of Brazil. He saw firsthand how the use of pesticides and intensive agriculture had caused the destruction of forests, the degradation of the soil and the deterioration in the farmers' health. His mounting conviction that a better model must be found was thus strongly affirmed.Wigold's childhood and teenage memories of farming are of a time when there was widespread cutting down of forests in the interest of "agricultural progress." When he was only five, he was planting his first trees and complaining to his parents as he witnessed the destruction of the region's primary forests. He was thus moved at an early age to combat that model of "unsustainable development" and to find effective ways to facilitate the recuperation of the region's forests.The creation of the Association for Preservation of the Environment in the Upper Itajaí Valley and the seedling nursery emerged as concrete initiatives to reverse the pattern of environmental destruction and to improve the social, environmental and economic conditions of the farmers and their families.