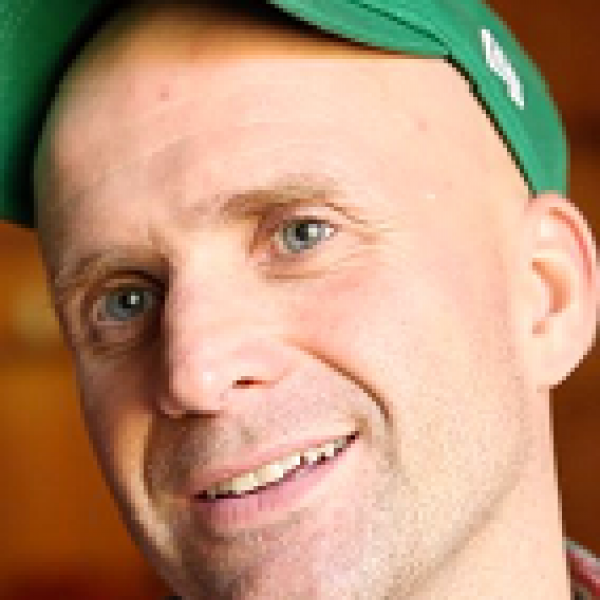 Check out this video of Bren's work:

Bren Smith is building a blue-green economy centered on a 3D ocean farm that will restore oceans and re-invent the fishing profession.

Bren Smith is building a blue-green economy that will restore oceans, mitigate climate change and re-invent the fishing profession. Over the past 12 years, Bren has created the world’s first multi-species 3D ocean farms centered on kelp, one of the world’s fastest growing plants and also the most carbon absorbing. This new model moves from growing vulnerable monocultures to vibrant ecosystems, which work to re-build biodiversity and produce higher yields. The infrastructure is simple: seaweed, scallops and mussels grow on floating ropes, stacked above oyster and clam cages below. The farm model has the capacity to grow 20 tons of sea vegetables and 500,000 shellfish on each acre per year with zero inputs. In turn, these crops produce food, fertilizers, animal feeds, pharmaceuticals, cosmetics, biofuels and much more.

Importantly, the farms restore, rather than deplete, the ocean ecosystems. Oysters, mussels and other shellfish filter nitrogen out of the water column while their cages act as a buffer from storm surges. With a single oyster filtering up to fifty gallons of water a day, even small farms can have measurable impacts on water quality. Some farms are in heavily polluted waters with the intention not of food production but the rehabilitation of the water. The reduction in nitrogen pollution prevents the establishment of dead zones and acres of seaweed act as a massive carbon sequestration blanket (kelp absorbs five times more carbon that of land-based plants). Meanwhile, the farms create a natural reef system that enables hundreds of wild species to thrive.

A lifelong fisherman, Bren is also sensitive to the slow decline of his profession. His innovative farming model provides fishermen caught in a dying industry with a new role as “climate change farmers” who build and nurture an entire eco-system for a growing market – including food, fertilizers, animal feeds, pharmaceuticals, cosmetics, biofuels and more. With 3D ocean farming at the center, Bren seeks to shift the conversation about how we need to save the oceans to a demonstration of how in fact, the oceans can save us.

The survival of humanity as a whole depends on oceans: oceans are 97% of the planet’s water and produce half the oxygen in the atmosphere. Over three billion people rely on oceans for their livelihoods and oceans are the largest source of protein in the world. Our oceans are in trouble. Climate change is driving all sea animals northward; nitrogen pollution is triggering ever-expanding dead zones; overfishing has wiped out 90% of large fish and there is a giant island of garbage floating in the middle of the Pacific Ocean. Scientists report that this triple threat of climate change, acidification and overfishing have triggered the largest marine extinction in 300 million years. The oceans are also an economic engine. In the US, the ocean economy provides 2.3 million jobs and $222 billion according to the Ocean Conservancy. The fishing industry alone accounts for one million jobs with over $32 billion in income. With the oceans in trouble, our food, our livelihoods, our water and the very air we breathe are in dire peril.

The current solutions revolve around two core strategies: ocean conservation and fishing limits combined with aquaculture. In September 2014, the United States created the largest marine preserve in the world ensuring that area is off-limits for both drilling and fishing. However these actions alone will not save our seas. Indeed, policy makers could designate the entirety of the ocean as a conservation zone, but without new strategies, climate change and acidification will continue to drive mass marine extinctions.

The dominant solution offered by environmental groups and industry experts to the dwindling supply of fish is to introduce both fishing limits and increase aquaculture. The industry refuses to grapple with the ecological limits of the wild harvest model to feed growing global populations and the “solution” offered by the aquaculture industry is to continue to build polluting systems of monoculture.

The United States is in the midst of a food revolution that intersects with numerous social movers from the slow food movement, the locavore movement, community-supported agriculture and farmers’ markets. Bren’s work will integrate the marine economies into the food revolution with attention to building the virtuous cycle that supports people, planet and profit.

Bren’s strategy is a unique combination of addressing the global problem of climate change and the dying industry of fishing. There are three core elements to his strategy. At the center of his work is the 3D ocean farm model that he invented. The second element is the organization he founded, GreenWave, to train farmers and spread the model. Last, he is developing strategic partnerships to develop the kelp market in the US.

Over the past 12 years, Bren created the world’s first multi-species 3D ocean farm. The model works to build a vibrant ecosystem. The model uses the entire vertical water column where the bottom is stacked with oyster and clam cages. Seaweed, scallops and mussels grow on floating ropes above the cages. The model requires zero inputs since there is no need for fresh water, fertilizer, or pesticides, making it the most sustainable form of food production on the planet. Kelp can grow up to two feet per day! The farm has the capacity to grow 20 tons of sea vegetables and 500,000 shellfish on each acre per year.

The farm has a low barrier to entry - anyone with 20 acres, a boat and $30,000 can start their own farm. Contrast this to land farming or aquaculture (estimates begin at $3000 per acre) which both require large up-front capital investments usually resulting in significant loans. The recurring costs including labor for the 3D ocean farm are $120,000 per year. The revenues in the first couple years are significant with conservative estimate of $450,000 in kelp revenue alone (based on sales of raw unprocessed kelp; would be higher for value added products). The shellfish sales add an additional $100,000 income in the second year of the farm. In contrast, one estimate placed other traditional forms of aquaculture profits in the range of $300 per acre per year. Small land-based farms are not profitable event in the best farm income years according to the USDA. The Thimble Island Oyster Company (as Bren’s farm is called) is an internationally recognized brand whose work has been covered by Fast Company, The Wall Street Journal, The New Yorker and National Geographic Television Network.

After perfecting the 3D farm model, Bren founded GreenWave two years ago to support a new generation of ocean farmers. GreenWave provides education, floating classroom job training and tools to support citizen-science research and collaboration. GreenWave builds hatcheries, mobile processing units and scale up restorative farms in New England. By the end of next year, this will translate into a 5x growth of the regional industry. Beyond New England, their team is also working with new farmers and entrepreneurs throughout the US to launch regional specific farms and develop value-added restorative ocean products. GreenWave has created an online collaboration platform that enables GreenWave to respond to hundreds of requests to start farms. The platform also gives ocean farmers the tools to monitor and track their farms remotely.

GreenWave also provides a mechanism for collective action to address the cultural and legislative barriers. For example, GreenWave was instrumental passing the first multi-species farming legislation in the United States in Connecticut. Collaboration and building extensive networks is core to Bren’s strategy for the replication of 3D ocean farms but also ensuring there is a research framework, communications strategy, and new product development. GreenWave has collaborated with researchers to understand the environmental and economic benefits of restorative ocean farming. To date, GreenWave has partnered with Woods Hole Research Center, University of Connecticut, Yale University, the State Department, national aquariums, Natural Resources Defense Council and others. In the first two years, GreenWave has supported the development of ten 3D ocean farms and plan to have 100 farms within the next five years.

The market for “restorative seafood”, the products of 3D ocean farms is large with huge potential for growth, especially for kelp. Currently the seaweed market is $6.4 billion globally. Kelp is already used in many different ways including fertilizer, cosmetics, pharmaceuticals and animal feed for fish, cattle and sheep. The largest growth and profit potentials are in food products and the development of kelp as a bio-fuel. Bren is currently in talks with Whole Foods and Sodexo (a major food supplier to college campuses).

Bren is able to sell fresh kelp right off the boat into New York City at $3/lb which is essentially the same price as kale or arugula. As a food crop, seaweed is rich in nutrients such as protein, calcium, and vitamin-C. Recent studies demonstrate that a network of seaweed farms the size of Washington State could produce all of the dietary protein needs of the human population. Bren already supplies some upscale Manhattan restaurants with kelp and some have developed entire menus around these sea vegetables. Bren is working with celebrity chefs like Barton Seaver to develop recipes and new food products based on “sea greens”.

Kelp is also a very efficient biofuel. Kelp can produce over 2,000 gallons of biofuel per acre annually. This is five times higher than the ethanol produced by corn and up to 30 times more per acre than soybeans. A network of farms totaling an area half the size of Maine could grow enough biofuel to replace all of the oil used in the US.

Bren envisions a planet that one day supports restorative species and practices in all of our coastal waters, and where millions of oceans farmers contribute food, energy, fertilizer, animal feed and much more to their local economies while securing a healthy planet for future generations.

Bren began his entrepreneurial path as a kid selling cod tongues door to door in Newfoundland. At age 14, Bren dropped out of high school and headed out to sea, working on cod and crab boats, in salmon canning factories, and in large-scale aquaculture farms. His first job was to stand on deck with a shotgun and shoot as many birds as possible before they stole the bait. He participated in the destruction of the ocean by factory trawlers scraping the seafloor, ripping up entire ecosystems; he fished illegally at night in protected waters; and threw thousands of pounds of dead bycatch back into the sea; all to supply fish to McDonald’s. As he watched the devastation of the ocean, he also experienced the decline of fishing as a livelihood. His hometown in Newfoundland, a once thriving fishing village, now has 40% unemployment.

As a young fisherman with salt in the veins, the destruction was too much to bear, so he decided to try his hand at aquaculture. Aquaculture was to be the answer to overfishing, but it was more of the same destruction, achieved in new ways. Disillusioned with the fishing industry, Bren kept hunting for a sustainable way to work the seas, own his own boat, live a self-directed life, and leave the ocean in a better place.

Over the years while working as a fisherman, he earned a law degree from Cornell University, launched and ran a reclaimed woodworking business with over $300,000 in gross sales. Bren has written for a wide variety of publications including the New York Times, National Geographic, Saveur and The Atlantic. Bren's work has been profiled by The New Yorker, Bon Appetit, Fast Company, and the Wall Street Journal. In 2013, he was chosen as one of six Ocean Heroes finalists by Oceana and a SOCAP global Ocean Entrepreneur. In 2014, he was selected as an Echoing Green Climate Fellow.