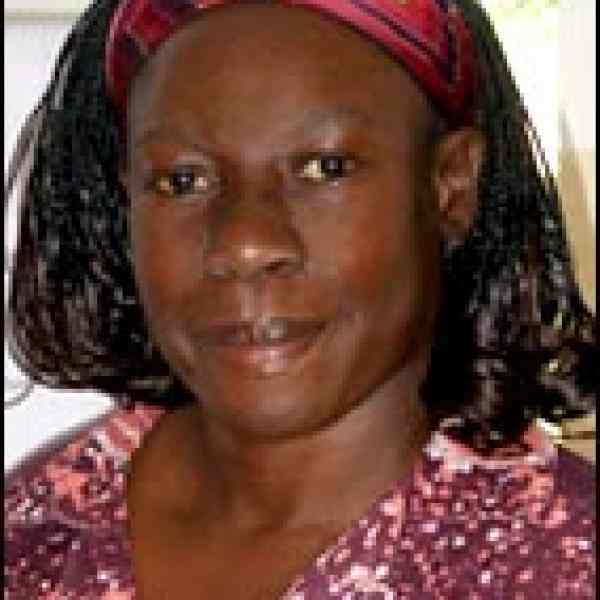 Atuki Turner is reducing gender violence by making it a community problem rather than private one, and then equipping communities to stop it.

By empowering various community structures such as police, schools, health centers, and courts, to do something about domestic violence, Atuki is nurturing collective local ownership of the problem and developing a model for responsive communities. In much of Africa, women who are faced with domestic violence, particularly in rural areas, have little choice but to endure it or flee. Living in fear, they cannot be full participants in society, raise healthy and confident children, or be leaders in the development of their communities and societies. Atuki works with communities to realize and free themselves from this constraint on their own development. Through local women’s groups, Atuki uses an interactive program to train existing stakeholders such as health workers, police, judges, teachers, and young people to be more aware and to prevent and respond to domestic violence. She also works with the women’s groups and other actors to create new community structures, such as community safety forums, advice and legal aid centers, by-laws, and community panels that hear cases and recommend appropriate action.
Many women’s organizations assist survivors and potential survivors of violence through counseling, economic advancement, and awareness building. Until communities feel collectively equipped and responsible to address the violence in their midst, however, women will be at risk. Atuki is facilitating a societal shift that puts whole communities, rather than government, citizen sector organizations, or women alone at the service of this problem. Atuki’s community-based model, which she backs up with national-level policy work to create an enabling legal context, is replicable in communities anywhere. A resource kit she created to educate communities about domestic violence is already being used in other African countries and the UK.

In the face of the failure of government and social services, Atuki is building a local response to domestic violence that makes community members and structures responsible for protecting women from violence. With women’s groups as the drivers of the program, she uses an interactive training to educate children, adults, and institutions on violence against women. At the same time, she assists the women’s groups and their communities to create structures to protect women and to assist and rehabilitate survivors through counseling, economic activity and legal support. She backs up this community approach with national and pan-African campaigns to enact domestic violence legislation and to eliminate traditional practices that encourage violence against women.

Through existing local women’s groups, Atuki empowers women first to support each other in preventing and responding to domestic violence and then to draw the rest of the community into their efforts. As lack of financial security among women is a primary factor in domestic violence, Atuki supports the women’s groups with microcredit loans that allow them to generate wealth and thus reduce their dependence on men. She accompanies these loans with training in areas of income generation as well as education on reproductive health and domestic violence. Atuki brings in women leaders to share their experiences, as well as technical experts to train the women in skills such as new farming techniques. To expand the women’s resource and knowledge base, she also links them with other women’s groups in the region. As a result of these efforts, the women are not only earning an income, but have also become more visible within the community. Some are even running for local office.

In addition to the microcredit and education efforts, Atuki works with the women’s groups to set up counseling centers for women suffering from or at risk of domestic violence. These centers, as the hub of information about incidences of domestic violence, become the base for broader education and prevention efforts throughout the community. They are a resource for women confronted by violence, where they can seek information, counsel and response through the help of other women. Atuki currently has three centers, the initial one of which sees about two hundred women a year.

Recognizing that isolated women’s empowerment and support will not rid communities of violence against women, Atuki works with the women to educate the rest of the community and equip people to respond to the problem. Atuki has developed an interactive resource kit and training program to educate people on violence against women. Based on real-life experiences, the training uses drama, stories, films and personal testimonies in local languages to stimulate discussion and shift the community’s perspective of women from that of second-class citizens to critical participants in society and development.

She uses the violence training primarily in schools, health centers and police stations—three critical intervention points in preventing and responding to violence against women. Atuki and her staff have traveled with the resource kit throughout the Tororo district where the pilot program is based, training over 1,000 kids between 13 and 16 years old and 200 teachers. She is currently negotiating with the Ministry of Education to include the resource kit in the national school curriculum. Because health centers are often abused women’s first point of contact, she has also trained about 100 health workers across 10 health units in Tororo district and is working with the Ministry of Health to expand this training nationally. In addition, Atuki works with police, another critical point of contact for abused women, to be more aware of and sensitive to women’s issues. She has trained over one hundred police officers in twenty-six police centers and established a new police unit where all officers receive gender and human rights training and attend ongoing meetings with Atuki’s staff. As a result, Tororo district has become a model of effective police partnership, and Atuki has been asked to integrate her training into the national police academy curriculum.

Additionally, Atuki’s resource kit is already being used in over sixteen African countries, including South Africa, Kenya, Cameroon, Ghana, Nigeria, and Zambia. The kit is also being used for development education in Bristol in the UK, where all schools in one county are required to teach it. Local Bristol police who have been exposed to the kit have requested to use it with their officers.

Additionally, Atuki’s organization is adding legal aid capacity to the advice centers to promote a community-based form of legal recourse for women victims. Through debates at village and sub-county levels, the legal centers facilitate the formation of by-laws that criminalize domestic violence and traditional practices that lead to such violence. To link it to the existing legal system Atuki is working on linking these by-laws to the legal system through lobbying and awareness-building among judges. In facilitating the creation of by-laws at the local level, Atuki builds a community base of support for a larger national and international policy effort to enact legislation that will empower women in the face of violence. Her central campaign is to eliminate the bride price, which makes women the property of their husbands. Atuki believes that without the bride price, which is so commonly associated with domestic violence, women would not be forced to stay in violent situations. Education on this traditional practice is a core element of her training program in communities, and she uses radio programs and newspapers to stimulate debate on bride price and domestic violence nationwide. She has also created a growing pan-African network—currently with seventy member organizations—to build international pressure for eradication of this practice, which is not unique to Uganda.

In the meantime, she is looking to replicate her community model by promoting Mifumi as a model village in addressing domestic violence. Atuki is now developing a five-year plan to replicate the full model, with each center serving approximately 30,000 people. In the meantime, she wants to initiate an educational tourism program that will attract people from other districts and countries to learn and replicate the success of the Mifumi model.

To shift from donor aid dependence to locally raised resources, Atuki launched the Mifumi Enterprise, a profit-making arm of the Mifumi Project, in 2004. The enterprise will engage women in various investment opportunities, including a women’s bank, the first Internet café in Mifumi and a string of other businesses to raise revenue for the project.

Atuki’s commitment to and ideas for eradicating domestic violence have developed out of efforts throughout her life to respond to social problems and serve disadvantaged communities. At sixteen years old, Atuki chose to spend her holidays working at a nursery school directed by her mother. By the time she was 18, her parents had retired and moved to Mifumi, a village of about 3000 people in the countryside of Eastern Uganda, where her father helped build a school. Atuki taught at the school for a while and even after leaving for her university studies, returned during vacations to help out. Materials were scarce, forcing her to draw lessons in the sand and develop other creative teaching techniques.

In her youth, Atuki was always organizing her siblings at home and friends at primary and secondary school around some activity—girl guides, outings, plays, and fundraising events for a children’s home. As a young adult in England, she established the African Women in Development Group which won an award for innovation by the Bristol City Council in 1998. She also initiated an equal opportunities sub-group in the Women’s Aid Federation of England to deal with race and diversity.

Teaching in Kenya after her university studies, she met a COE missionary with a camp for destitute youth that he had turned into a major primary and secondary school. Atuki began dreaming of a similar transformation for the school back home. At the same time, she met her husband and they moved to the UK, where she worked with refugees in Manchester as part of Women’s Aid Federation. While in the UK, she and her husband, also a teacher, began planning changes to the school back in Mifumi. They eventually registered the Mifumi Project, first in the UK in 1995 to do fundraising and then in Uganda in 1997. In 1999, Atuki quit Women’s Aid, and she and her husband returned to East Africa so she could devote full time to the Mifumi Project.

Atuki’s original vision for the Mifumi school was to overcome poverty through education. However, when she lost a couple students every term to malaria, sickle cell, AIDS, and other fatal diseases, she knew she had to do something about health as well. She raised money to create a health clinic intended for primary health care. With no hospital nearby, however, they began providing clinical care as well. The clinic—staffed by a nurse, nurse assistant, and laboratory assistant and visited twice weekly by a doctor—now sees twenty patients a day. Through her work with the school, the health clinic, and a microcredit program she had started for women, she began to see how domestic violence was undermining their development efforts. She launched the first advice center run by women’s groups to address this issue, and grew it into the model that she is replicating today.