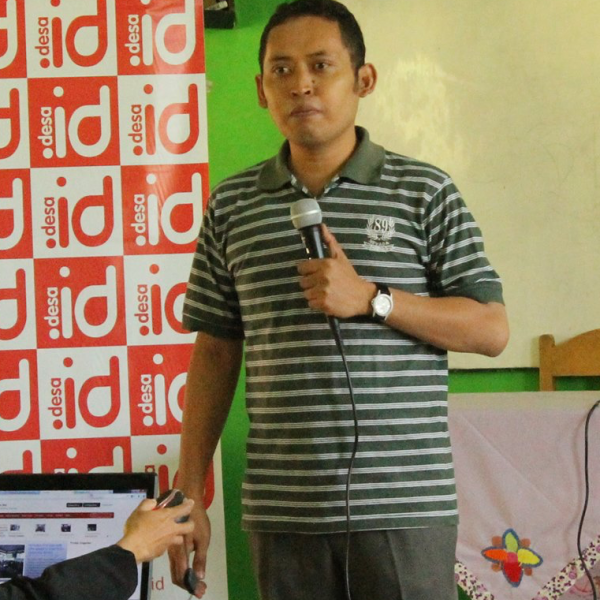 More than 70,000 “desa” (villages) are registered as the lowest level of rural government administration in Indonesia. Unlike their urban counterparts, “kelurahan” (sub-sub-district), these rural “desa” are linked with poverty and backwardness, a failed initiative of the higher-level government. With his ICT platform, Yossy enables village administration to formulate locally specific asset-based programs, to mobilize their own resources for development, and to collaborate with potential contributors from outside their villages.

Yossy developed the model through which villages empower other villages to use ICT as the tool to good governance. The villages collect their own accurate data, manage it and publish it on their websites. The data is used by the regional and central governments to plan development programs. Yossy provides the ICT infrastructure and workshops for officers to learn how to use and maintain these resources.

Yossy developed the “desa.id” domain himself, and encourages village administrators to create their own websites as a platform to publish critical data such as total population, maternal and child mortality, birthrate, and rates of migration. This data is very useful in rural development planning to ascertain the village’s income and economic resources. The villagers help collect the data, and through this model, they can act as the watchdog for their village’s authority. This forces the village authority to practice good governance, accountability and transparency.

To cope with the infrastructural challenge, Yossy used appropriate technology (cooking pan-parabola) and ICT volunteers (particularly Desa Melek IT volunteers) to open ICT access and to turn individuals into adept users in a web 2.0 world. Nicknamed Kades 2.0., these village administrators were upgraded with knowledge on how to use ICT to promote their villages. As a note, unlike the government-appointed civil-servant urban “lurah” (sub-sub-district leader), rural village administrators are often community-appointed, work voluntarily, and are not necessarily formally trained on governance or development management.

Yossy is also working with village youth groups, Karang Taruna, to empower them with the ICT skills necessary to maintain desa.id, and to map the village’s potential economic resources. These youth groups become the content provider for websites.

With the interconnectivity facilitated by web 2.0, villages gain more opportunity to collaborate: with other villages, academics, activists, professionals, or anyone who might contribute to the village development and villagers’ welfare.

Starting from mandalamekar.desa.id, this initiative rolled into Gerakan Desa Membangun (“Village Movement to Develop Indonesia,” a reversal of government’s jargon “our program to develop villages”) – a movement comprising approximately 300 villages across Indonesia. The concepts of village governance published in the portal desamembangun.or.id have been adopted in the recently passed national Law No. 6/2014 on the Village.

Every year there is a national budget allocated for rural development at the provincial government level. However, the earmarked programs do not meet the needs of the rural areas. The main problem is the lack of available and accurate data on rural demographics.

Although participatory planning and good governance have been the norm in development process, rural villages are still largely dependent on higher level structure in framing what’s best for their area. Stigmatized as inferior in knowledge, skill, and authority, village administrations have no bargaining position in the development agenda pushed by sub-district or district government. As the result, oftentimes villagers stand as victims of social-environmental impact rather than really benefiting from development.

With its vast natural resources, villages should be the backbone of Indonesia’s development. However, most villagers as well as village administrators often overlook the potential of their area. Lack of access to information leads to rural-urban gap in opportunity, thus making villages less interesting for the villagers themselves. Without proper information, it’s also difficult for village authorities to plan development programs based on locally-specific assets.

With the advancement of information and technology, there is an opportunity for the villages to close the gap and catch up. Unfortunately, proper technology infrastructure is slow to develop at the village level, as is a lack of training in human resource development.

Yossy’s work ensures that data is collected to improve village outcomes. This data had previously been unavailable for open source use, but is now published on the desa.id platform. As such, it can be tracked by a diversity of stakeholders – including the government, NGOs, and companies – to provide assistance to the village. The Indonesian Government has adopted Yossy’s work in the policy arena, and to spread his vision, Yossy requests that each village he works with shares learnings with three other villages.

Yossy first approached village administrators – including the chiefs or secretaries of the village – to share the importance of aggregating village demograhics data, and the ease with which ICT infrastructure could help do this. His first village websites worked through simple platforms like Blogspot or WordPress. Through word of mouth, an increasing number of villages expressed desire to participate, and so Yossy mobilized ICT volunteers from villages he worked with to organize capacity building workshops. The Village that already implemented ICT becomes the host, and the village chief becomes the facilitator. Such workshops are organized voluntarily – villagers contribute meals for participants, although in some districts a small amount of transportation reimbursement is provided. This is how the model is spread.

Aside from training on how to build a website, such workshop builds awareness among village chiefs on information management, accountability and transparency as part of good village governance. Furthermore, the chiefs learn about village marketing – how to promote local potentials, including agriculture, craft, and tourism. To facilitate this, Yossy advocates the use of desa.id as a domain name – as a clear identity, as an acknowledgement of ICT literacy for the village, and as a brand for villagers.

The initiative has nurtured a number of progressive village chiefs, including one in Mandala Mekar Village, Tasikmalaya District. The chief was concerned about a number of villagers, who were arrested after protest against mining deals that exploited the village. The website mandalamekar.desa.id helped the chief to voice local issues, while the story inspired the public. The village finally gained government’s attention to cancel the mining deal, and also to repair the village road and build a communication tower. Furthermore, farmers learned about mixed cultivation and market price information through the internet. In Panjalu Village, aside from using website to market local handicrafts (resulting in grants from national government), ICT was used to stream vote calculation for the village chief election. The process was projected on big screen in a village square, and viewed by 2000 villagers.

Another village chief use the village website dermaji.desa.id to provide easy-to-read, clear, and accountable information about development activities currently running, being planned, or already accomplished. Thus villagers can view village policy, budget-expenditure reports, and development plans. The chief even introduced a new use of ICT to track and protect migrant workers from the village, in collaboration with migrant workers organizations and women’s organizations. Using “Mitra Desa” app, a database of migrant workers is built, thus minimizing trafficking and facilitating case management and monitoring for their well-being. For this initiative, the village chief was recently awarded an Inspiring Young Leader 2014 award from a national news portal.

From the work with more than 1000 villages, Yossy has created a forum for village empowerment, comprising social activists, villagers, journalists, ICT practitioners who collaborate for social change. Village’s leaders are now practicing good governance as they become accountable, participatory and transparent.

The initiative to use ICT to share the latest news in the village – so that information is published openly – has been drafted into Law No. 6/2014 on Village. In the future, the governments won’t have to spend trillions of Indonesian Rupees for census counts, as the villages will have a solid system for accurate and updated demographic data, such as birth, death, gender statistics and the like. The data could politically be useful to prepare against election fraud, such as fake or double identity. It can thus strengthening their bargaining position vis a vis political parties, supra-structure government and legislatures.

Yossy is the third of six siblings from a poor family. His father was a farmer and his mother sold vegetables in the market. Both have only a primary school education. Since seven years old, Yossy helped his father work in the rice field with his brothers. His family was known as the poorest family in the village in Cilacap, Central Java. On the contrary, his grandfather on his father’s side was known as the richest – with wealth accumulated from a military backed illegal logging operation. His father was against the illegal activity and refused any penny from the grandfather.

Yossy realized the value of education in changing his fate. He passed Junior and Senior High School with scholarships. During his time in college, he supported himself by writing for the newspaper. Working for the newspaper, Yossy first learned about the computer, sleeping in the office to lower rent costs. In 2006, Yossy worked in Combine, a non-profit based in Yogyakarta (in which Ashoka Fellow Dodo Juliman was active), and had the chance to visit villages for various ICT initiatives. He was also introduced with ICT activists from Yayasan Air Putih – an organization dedicated to open source technology and ICT literacy.

But during his work in Combine, he had to resign and accompany his wife who was ill. For six months, Yossy could not find other work, and had to sustain himself through farming. The neighbors wondered why he was back at the village, and his wife’s family was insulted that an educated man would take to farming. Though at first Yossy subconsciously presented himself as “middle class” given his background, he realized that he should make the effort to integrate himself into the community. This merging of his two worlds helped him see the the potential of ICT as a tool to develop villages. Starting from being “computer-handyman” in his home-village, he introduced his idea to the village chief, who gave a lukewarm response. Through the ICT activists network he met chief of Mandala Mekar Village, Tasikmalaya, who enthusiastically embraced the idea. The successful pilot in 2010 led him to establish Gerakan Desa Membangun.