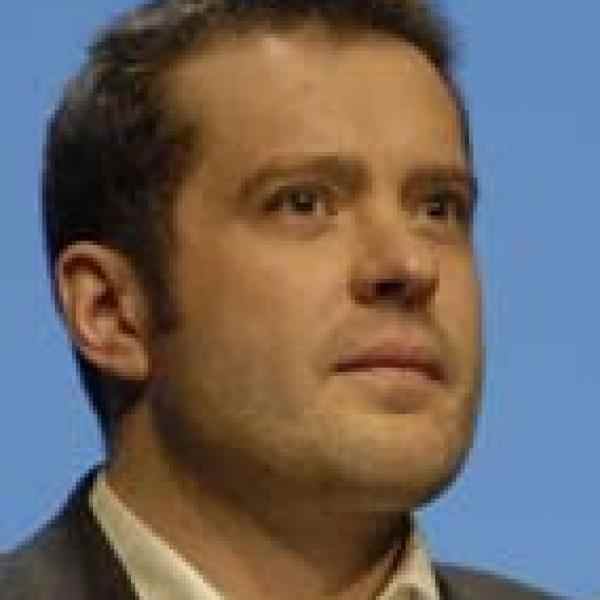 Julien, through Enercoop, is bringing citizens and renewable energy entrepreneurs together to build the capacity of renewable energy production, provide this energy to an increasing number of consumers, and work with consumers to reduce overall energy consumption. Enercoop’s cooperatives are mobilizing the resources of thousands of French people and channeling them to local entrepreneurs in communities who are building solar, wind and biomass power production facilities in communities across the country. At the same time, Julien brings these entrepreneurs together to help them overcome the barriers to accessing the electricity distribution networks, which are controlled by the country’s historic monopoly provider.

With Enercoop, empowered consumers can make a conscious choice about where they invest the money they spend on electricity and become shareholders of renewable energy equipment efforts. When they make the choice to purchase renewable energy, Enercoop also educates consumers about the impact of their consumption and incentivizes them to behave more responsibly, leading to precious energy—and cost—savings, which in turn translate to further investment in the development of even more infrastructure.

Julien is engaging local communities in building renewable energy production sources through the multiplication of local cooperatives, and then organizing them to influence policymakers to support investment in renewable energy and other environmental efforts at a national level.

When it comes to producing electric energy, the French government’s answer has always been very simple: Nuclear power plants. Nuclear power accounts for nearly 80 percent of the country’s electricity consumption. While this has guaranteed the country’s independence from fossil fuels and has long kept individual electric bills quite low (25 to 35 percent below the European average), the situation has been changing dramatically over the past few years. The aging infrastructure needs to be adapted and improved, which when coupled with the increasing cost of nuclear waste management, have caused prices over the past few years to soar. These prices will continue in this direction in the coming years without attention to the problem. There are also the obvious environmental and health risks associated with nuclear energy production, of which we recently have been reminded by the 2011 Japanese earthquake.

France’s electricity market opened to competition in 2004, but very few players have been able to position themselves and to offer a credible alternative. With little transparency, France’s nuclear energy producers continue to benefit from government subsidies, which keep prices low for consumers. In addition, the upfront investment costs required to create and produce renewable energy on a large scale has deterred or bankrupted most entrants. Another challenge is that all energy providers have had to rely on the historic electricity provider (EDF) for distribution infrastructure, which dramatically reduces their margins and profitability: On average, new, non-nuclear electricity providers are 5 to 20 percent more expensive than EDF. Finally, the French government declared a moratorium on investing taxpayer dollars in developing any new solar or wind power infrastructure in order to channel government resources into the maintenance of the existing national nuclear power infrastructure.

Given this, the existing 27 nuclear power plants continue to provide most of the national electricity. While national surveys suggest that 97 percent of consumers would favor renewable energy sources, in practice they tend to stick to the traditional provider, which is easier and cheaper than the new, renewable sources. Most homes and manufacturing equipment in France are not energy efficient and most use electric heating because they have had access to cheap electricity for decades. Studies show that 20 percent of France’s electricity consumption could be reduced by changes in daily habits and simple home improvements.

Some progress has been made. Fiscal incentives, for example, have encouraged individuals to improve their insulation and to install renewable electricity production infrastructure in their homes (solar and wood). In 2010, however, only 21 percent of the French reported that they had some kind of renewable energy source at home. So these efforts remain far from sufficient. Fragmented and inefficient, home-based energy production infrastructures are not a fully satisfactory solution: They only cover a minimal part of people’s daily consumption and need to be complemented by mainstream electricity provision. Besides, contrary to the German model—created by Ashoka Fellow Ursula Sladek—green energy individual producers are not allowed to sell their surplus back into the grid. In addition, because these tax incentives ended in 2011, many of these individual efforts to develop renewable energy sources at home will stop.

With the opening of the French electricity market in 2004, Julien saw the opportunity to transform consumption behavior and to develop the country’s renewable energy capacity. In spite of all the barriers and high costs to entry, he launched Enercoop, the first energy production and consumption cooperative. Strategically reaching out to environmentally conscious consumers (through partnerships with citizen organizations, organic retailers and green banks), he mobilized citizens to become shareholders of his non-profit cooperative and purchase electricity produced entirely from renewable sources, with all profits reinvested directly back into the development of additional alternative energy sources. Julien has attracted nearly 7,000 consumers to date, and together they have managed to demonstrate that there is a viable, sustainable and scalable alternative to nuclear power.

While most renewable energy producers struggle to exist in the current market for electricity, by joining Julien’s cooperative they find the support and investment they need to stay afloat and thrive. Currently, Enercoop has 55 producers who supply the cooperative with electricity. These producers benefit from the working capital of the whole cooperative, and can count on stable prices and a stable demand thanks to long-term contracts of over 20 years (vs 1 to 3 years on the speculative energy market). These producers also benefit from the fact that Enercoop can reduce the cost of accessing the EDF network by providing the energy in bulk quantities, which individual producers cannot do. Progressively, Julien is developing new renewable energy production facilities in communities across France to cover the needs of new customers. He works with communities to develop the best renewable energy source, and provides some capital for building, mostly coming from the community itself as clients are also shareholders and invest some of their savings in Enercoop. Julien is interested in creating close community ties with and local ownership over the renewable energy facilities in order to educate communities about the value of renewable energy. He is currently multiplying local branches of Enercoop—two have been created, three are in the works, and his goal is to have a branch in each of the 22 French regions, so that the entire country will be served within 5 years.

Julien recognizes that offering alternative energy sources is not enough to shift consumers away from traditional power sources, especially if traditional sources are currently less expensive. For this reason, Julien is also very focused on reducing energy consumption. He engages citizens, producers, businesses, and local government authorities in his cooperative and helps them identify ways to reduce their consumption. As a result, even if Julien’s prices currently are about 30 percent above the market, since cooperative members consume on average 30 percent less energy their electricity bill is the same amount—and their negative impact is much lower. Enercoop also engages citizens, producers, businesses and local government authorities in understanding the need for communities to invest in renewable energy sources for a low-impact, long-term solution to France’s energy needs and to push for national policies that provide incentives for renewable sources.

Julien recognizes that to move beyond being a niche market supplier and significantly increase the number of consumers using renewable energy sources will be difficult if renewable energy prices remain well above those of the traditional energy supplier. To address this, over the next several years, he is focusing on building the number of renewable energy production sites in local communities across the country in order to provide locally produced energy that will be less expensive than energy that has to be transferred longer distances. He also will continue to help consumers reduce consumption in various ways, and push for policy change and greater investment in renewable sources. Then, in 2015, by law, the French energy producers will no longer be subsidized by the government (France is doing this to comply with European Union policy). All French producers will be required to charge market prices for electricity, creating a more level playing field for producers of renewable energy. At that time, prices of traditional producers are expected to rise. At the same time, Enercoop expects its prices to remain the same or drop. Consequently, Enercoop will have more producers and more capacity, and should be able to begin to compete to significantly increase the number of consumers using energy produced from renewable sources.

Julien developed an environmental and social consciousness beginning at a young age. Growing up near the sea in the North of France, he invested a lot of time with the Surfrider Foundation to clean beaches and fight against sea pollution. He then joined the ATTAC movement to promote the idea of a tax over global financial transactions to be invested into South-North solidarity models. Julien got passionate about the topic of energy when he was a physics student. Following a postgraduate year on energy economics and then an internship with Greenpeace, he started questioning the dominant model and learning about alternative solutions.

When Julien graduated in 2004, the energy market opened, and he saw unique challenges and opportunities: It was time for new stakeholders to come to life and challenge the nuclear power plant strategy. More importantly, Julien learned the power of citizens and grassroots mobilization, and searched for the best way to leverage it in a new energy paradigm. He wrote his master’s thesis on the topic and identified a niche for a fully renewable, consumer-based approach on the market.

In May 2005, with the help of grassroots organizations and the support of Greenpeace, he created Enercoop and managed to incorporate renewable energy producers in his adventure. The first years in a highly competitive market, where EDF had kept prices artificially low for years, were very difficult. Julien’s drive and creativity, however, allowed him to become the second energy provider in France. As he spreads into various regions, he wants to truly challenge the status quo and create a large-scale demonstration of an alternative energy model.