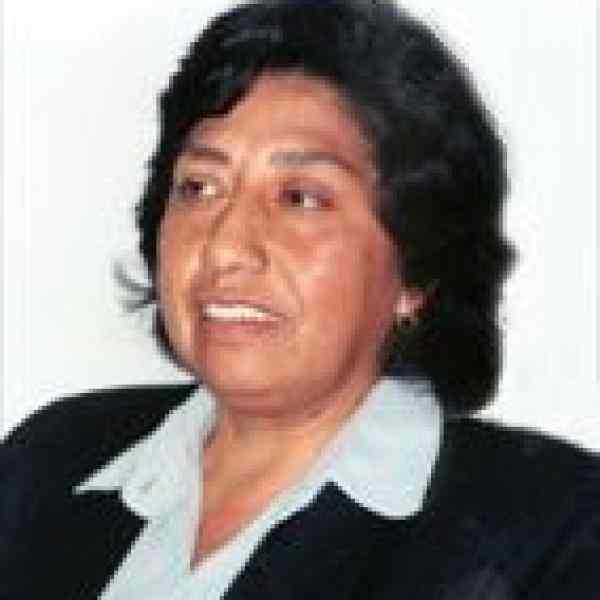 Having worked for more than a decade to help people driven from their homes and communities by political violence, Isabel Coral is now assisting their return and resettlement in the areas from which they had fled, and helping chart and stimulate broader recovery efforts in those areas. In pilot projects in several Andean communities, she is developing imaginative and effective solutions to some of the most vexing dimensions of the return and recovery processes.

After more than a dozen years of political violence and huge flows of displaced people to Lima (and, in lesser measure, other urban centers), the violence and attendant exodus have waned, and substantial numbers of people are now returning, or seeking to return, to the communities from which they had fled. Isabel Coral believes that the success of the return process is of crucial importance not only for the hundreds of thousands of people directly affected but also for the revitalization of the country's south-central Andean region, which was the focal point of the violence, and for national political harmony over the longer term. She also recognizes that the return process and broader recovery efforts pose immensely difficult challenges that will make heavy demands on limited financial resources and on the skills and imagination of everyone involved.Working through a small organization that she established more than a decade ago to address the needs of people displaced by the violence, Isabel is mapping the major elements of the returnee resettlement and recovery processes and developing pilot undertakings to address many of the most difficult dimensions of those processes. In those endeavors she is placing heavy emphasis on community participation and spurring the creation of "community rebuilding and development committees." She is also working closely with government agencies and other nongovernmental organizations engaged in resettlement and reconstruction work and helping guide their endeavors.

Since 1983, the violent tactics of the Sendero Luminoso ("Shining Path") guerrilla movement in Peru have disrupted the lives of approximately one million people. Over the course of a dozen years, as many as 600,000 people fled their homes and communities, most of them to the dismally poor slums of Lima. The burden of displacement fell principally on peasant farmers from the south-central Andean region (the Departments of Ayacucho, Huancavelica, Apurimac, and Junin), where approximately one-quarter of the population was uprooted and some 420 communities were abandoned, many of them completely destroyed.

Torn away from familiar surroundings and routines, the "internal refugees" typically arrived in Lima with little money, the barest of possessions, and few of the skills required for successful adaptation to urban settings. Taking up residence in the shantytowns surrounding the capital, they lived in circumstances that can only be described as "desperate," even by the standards of a country chronically burdened with extreme poverty.

Most Lima residents greeted these newcomers with indifference, misunderstanding, discrimination, and, not infrequently, fear (based on the suspicion that some or many of them could themselves be terrorists). Impoverished, unorganized, and "voiceless," displaced people were largely ignored by public officials, and, for many years, government agencies did little to address even their most pressing needs. In the early 1990s, an escalation of Sendero Luminoso terrorist activity in Lima itself heightened public awareness of the suffering of the victims of such activity, but it did not result in significant new governmental initiatives to assist the huge community of displaced persons in the country's capital city.

In more recent years, as the Sendero Luminoso movement has lost its vigor and the intensity of political violence has ebbed, flows of newly displaced people to Lima (and other urban settings) have sharply declined. In the conditions that now prevail, some displaced people are electing to remain in Lima (or other cities to which they had fled), but more than half of them are now returning, or seeking to return, to their former communities.

What many of those who have already returned are finding, however, is that a dozen years of political violence, compounded by a major economic crisis over much of the same period, have devastated the infrastructure and productive capacity of the areas where they formerly lived. Public and private agencies assisting the return process are learning, often "the hard way," that a successful return process involves much more than transporting people back to areas that they had abandoned many years ago. Indeed, both for those returning to their former communities and for others who remain in the areas to which they have fled, it is increasingly evident that reestablishing productive and satisfying lives will be a lengthy and complex endeavor.

For more than a decade, Isabel has been working with displaced people in Lima and Ayacucho. Her institutional base is the Center for Social Development and Promotion, a self-standing nonprofit organization that she founded in 1986. With funding from European sources, the Center concentrated its efforts during its first several years of operation on eliciting public support for the plight of rapidly growing numbers of people displaced by political violence and on helping displaced people to organize, recover from their trauma, rebuild their confidence, and obtain much-needed services from agencies of the Peruvian government and other sources.

More recently, however, as political violence has waned, Isabel has shifted the focus of her work and is now directing most of her attention to the return process and the broader issue of recovery, particularly in the south-central Andean region, which was hardest hit by the violence and the initial locus of more than 80 percent of people who were displaced from their homes. Within that region, she has selected target zones (with diverse economic, social, and cultural characteristics) where the Center is now engaged in a series of efforts to determine community priorities for recovery and redevelopment, initiate the rebuilding of critically needed physical and social infrastructure, and assist the return and resettlement of displaced people and their reintegration in communities where some of their neighbors had remained throughout the long years of violence.

With those objectives in view, Isabel and her associates have initiated a series of pilot initiatives. In one of them, in Vilcas Huaman in Ayacucho, they are helping returning refugees expand and diversify agricultural production. In another, in two small Andean communities, they are helping rehabilitate children traumatized by violence. In a third pilot endeavor, they are developing a training program for police and military officials on non-violent methods for maintaining public order. In those and many other projects in some sixteen communities, they are enlisting the support of relevant experts–agronomists, psychologists, engineers, architects, and business people–in the development of model projects that will help point the way for the resettlement and recovery efforts of public agencies over the next several years.

Increasing women's contributions to, and influence in, the recovery process is another important dimension of Isabel's efforts. With that aim in view, she and her colleagues are working with a national network of women's groups in a series of projects focusing on agricultural production and marketing, micro-enterprise development, and women's rights.

In all of their activities, Isabel and her associates place strong emphasis on community participation, and, in each of the communities in which they are working, they are promoting the development of "community rebuilding and development committees." They are also coordinating the Center's efforts with government agencies, Peruvian and international nongovernmental organizations, and church groups engaged in the resettlement of returnees and broader recovery efforts. In part in response to Isabel's prodding, the government has given formal recognition to the needs of displaced people in a recently issued "National Agenda," and created a "resettlement and support program" that incorporates a number of the strategies that Isabel has developed in her pilot undertakings.

Isabel's work with displaced people is both motivated and informed by long experience with poverty in rural and urban settings. She was born and raised in a small, impoverished community, with no electricity or running water, in the Department of Ancash, in Peru's north-central Andean region. Her family subsequently emigrated to Lima, where they lived in a marginal area in economic circumstances even more precarious than those they had known in Ancash.

When she was eighteen, undeterred by her family's modest economic means, Isabel enrolled in the University of San Marcos in Lima, where she completed a degree in the social sciences. Like many of her fellow students, she was also actively engaged in partisan politics during her years at San Marcos.

Upon completing her university studies, Isabel spent the next dozen years as a university teacher and researcher. The first of those years was as a junior faculty member at the Technical University of the Altiplano, in Puno. She then moved to the National University of San Cristóbal de Huamanga in Ayacucho, where she held a series of posts and eventually served as director of the School of Social Services.

In Ayacucho, Isabel was also actively engaged in union work, local politics, and development initiatives. In those capacities she frequently met with peasant leaders, but not with the Sendero Luminoso partisans. In the mid-1980s, as the Sendero Luminoso violence spread over the south-central Andean region, Ayacucho was at the center of the most heavily affected area. And when Isabel opposed the use of university facilities for Sendero Luminoso gatherings, her life was threatened and she was forced to flee to Lima.

In Lima, Isabel completed a master's program in the social sciences at the Catholic University, which provided her an opportunity to reflect on the interrelationships of her academic and political pursuits and to think about her future professional course. During that period, she was also in constant touch with others that had fled from Ayacucho. Much moved by the emotional and physical suffering that many of them were forced to endure, she soon decided to devote her full energies to the problems and needs of displaced people in Lima and Ayacucho.

In 1986, Isabel founded The Center for Social Development and Promotion to serve as the institutional base for her new endeavor. Over the ensuing decade, she has tirelessly labored both to heighten public awareness of the plight of the country's "internal refugees" and to mobilize the many forms of assistance that they have urgently needed. In 1992, the Center's offices were the target of a Sendero Luminoso attack in which all of its records and much of its furniture and equipment were destroyed. Isabel was present but not seriously injured during that incident, and the blast only strengthened her resolve to help point the way for the hundreds of thousands of victims of political violence in Peru to reestablish themselves and find more productive and satisfying lives.