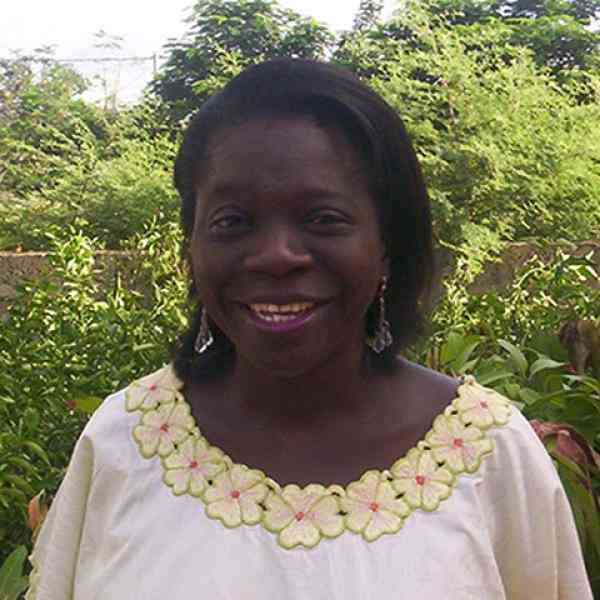 Ini Damien (Burkina Faso 1997) is working to improve the situation of women in Burkina Faso and to conquer the socio-cultural resistances which can threaten the sustainability of these changes, through a harmonious use of both cultural traditions and plans for change. Her work will extend to the surrounding countries, where the same people and languages are present.

Ini Damien, herself a woman of the rural world, is showing women how to bring about lasting social and economic improvements for themselves within the existing traditions of their communities. She distinguishes between some sociocultural practices and their negative effects, and identifies other sociocultural practices she can use to reinvent and reinforce gender-positive behaviors. Thus, while maintaining cultural traditions, Ini fights against the resistance to social change and secures the endorsement of the community for the changes she introduces. She explains that there are certain traditional levers, which when used wisely, can change things without disowning the cultural identity. "One cannot get rid of one's culture in every case and, we do not want to: what we aim to do is to keep the positive elements and continue to be ourselves: before, women were afraid, and now, they have self-confidence as women, and not only as mothers or wives."

Gaoua, where Ini works, is situated in the Southwest Burkina Faso, about 600 kilometers from Ouagadougou, the country's capital. The access roads to this enclosed rural region are defective, keeping the population isolated from socioeconomic changes occurring in Burkina Faso and other countries of the subregion. This region, situated midway between the borders of Burkina Faso, Cote d'Ivoire, and Ghana, is abundant in natural resources and unexploited potential, taking into account its remoteness and the fact that the region is relatively "ignored" by the government.Various practices, such as the forced marriage of widows (to the deceased husband's brother), excision, the denial of access to land for women, different forms of violence towards women, as well as poverty, inhibit the participation of women in their own development and the development of the region.Third parties focused on changing social practices within the region have neglected to take the cultural context into consideration: as long as these organizations and their agents are on the field, there is apparent change; however, once they are no longer present, people return to their previous practices. One example cited was the case in which women, to the exclusion of men, were targeted in a family planning sensitizing program. Birth control pills were distributed to women, who took them, but never ingested them. They would take them home and store them. Accepting the pills was not a problem. Taking the pills without the consent of their husbands, however, was thought to have negative spiritual repercussions.

Ini works through the Association for the Promotion of Women in Gaoua (APFG), which was created in 1990 with 30 members; in 1992 it was recognized at the national level, after a moral inquiry concerning the reliability and seriousness of the organization, and now counts 100 members. Its overall objective is to fight ignorance, economic dependence, and female subjugation in this region of Burkina Faso and in surrounding countries. There are a large number of local organizations in the region which would like to join the Association, but Ini has requested that each remain autonomous. The Association will work with them to train women facilitators who will help women's groups and other communities to detect local potential sociocultural tools for change and thus maximize their impact throughout the southwestern region, including Ghana and the Ivory Coast.The essence of Ini's strategy is to use procedures that can be accepted and appropriated by the targeted populations. Two issues with which Ini has had remarkable success have been in the areas of women's access to land and female genital circumcision.In the Gaoua region of Burkina Faso, although it is the men who plow the fields, the women plant, cultivate, pick, winnow grains, sell the produce, and give the money to their husbands. The Association wanted to buy an orchard for agricultural projects. Traditionally, the women do not have access to land, but current Burkinab regulations allowed the Association to make a simple demand for land. The land in question traditionally belonged to a certain clan which still considered itself the owner of the land although they had not legally registered it with a land title. Knowing in advance that any attempt to acquire the land outright would be perceived as an attack, Ini chose to avoid any direct confrontations. Operating in the interests of the Association, she used the traditional link which unites members of her clan to that of the landowner in the negotiations. After taking the necessary steps and feeling confident of not having broken any traditional rules, the landowner agreed to transfer ownership, had his decision approved by village representatives, and took the necessary steps for the Association to obtain the land rights.Ini's way of combating female genital circumcision also illustrates her tactical skill. With the Association, she organized a series of meetings with the traditional circumcisers regarding the issue, while keeping in mind the mentality and traditions of these women. The circumcisers explained that female genital circumcision was a matter of moral obligation to the ancestors: they really wanted to do something to help, but they also wanted to have a clear conscience. After much negotiation, Ini and the Association successfully persuaded them to maintain all of the sacred and initiatory elements of the rite, so that they could continue to feel that they had done their duties. The compromise was that the women circumcisers would perform all of the same gestures and preserve the ritual without performing the actual excision. At the request of a chief from a neighboring village in Ghana, who had heard of the group's work via their radio broadcast, Association members are beginning a similar campaign there.The women of the Association have managed to renegotiate their position in society also by appropriating the notion of their fundamental human rights. Through seminars organized around the new Burkinabé Family Code and other legal instruments, Ini and the Association help women to know of their rights, their recourse for action, and the opportunities which are available to them. For example, today they know that in the instances of domestic violence they can turn to the police. These women no longer accept the practice of marrying widows to their deceased husbands' brothers, and, in these instances, the women mobilize themselves to prevent the reimbursement of cattle and dowries, which has been the penalty for refusing to participate in the practice. Lasting, substantive change in family planning has also come to pass. In contrast to earlier attempts by outside organizations to introduce birth control pills, Ini and the Association sensitized the husbands, made them a part of the process, and eliminated the women's fear of spiritual and religious consequences.The Association's information campaigns have a high rate of attendance and are supported and disseminated by a communications and media campaign. At the state and regional levels, the Association hosts broadcasts four times a week, on a variety of topics. The Association pays for these hourly time slots, during which programs are broadcast in four languages. It is the only organization in the area to have such broad-reaching activities. Apart from the chapter of Women and Children of MBDHP (Burkinabé Movement of the Rights of Man and People), for which Ini has always been an activist, the Association is the only women's organization founded in that region.Because economic dependence is one of the principal factors leading to the subjection of women, Ini has helped the Association's female members put revenue-generating economic activities in place. They include the selling of products, the production of karite, the production of a millet-based beer commonly called "dolo," and the installation of a grain bank and food crops.

Born in 1964, Ini Damien is a teacher by profession, with thirteen years of teaching experience. Born into a polygamous family, Ini was disturbed by the discrimination between boys and girls, which manifested itself in household chores, cooking, and 4:00 A.M. risings to fetch water from a distance of five kilometers from her home.Ini's father was a soldier in the French army, and fought in the Second World War. When he returned home, he enrolled all of his children, both male and female, in the primary and secondary school program. At the same time, he made sure that they took part in the native Lobi initiation and education system.A rebel, Ini led a group of girls in primary school, and they would occasionally get together to confront the provocation of boys. Obstinate and passionate about social justice, she went into the field of education, and obtained the required certificates and diplomas, in order to be able to make a change, from a young age, in the lives of children.Patient, Ini comes to life when asked questions linked to the rural world: "It is a question of certain women from cities who don't come to the rural areas unless donors ask for the reports; they then claim, loud and strong, national coverage and a job fully completed. We, the women of the rural world, do not agree." This is why she does not hesitate to travel the 700 kilometers which separate Gaoua and Ouagadougou and put up with the travel conditions, in order to be an active spokesperson for the women of the rural world, in particular.