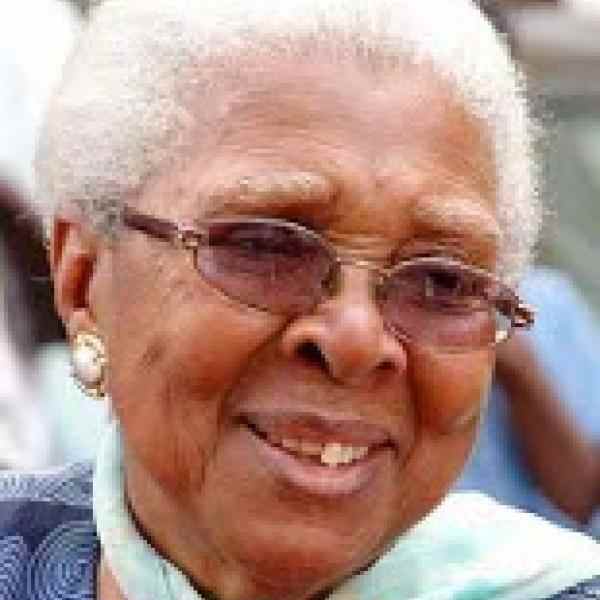 Annette Mbaye D’Erneville’s Le Musée de la Femme Henriette Bathily on the island of Gorée in the harbor of Dakar was the first women’s museum in Africa. The idea of a women’s museum focusing on issues pertaining to women of that particular area of Africa where the museum is located (vs. “African women”) has been copied in a permanent museum in Mali and the theme has been reprised in traveling exhibitions around the world.

In 1977 Annette was key in establishing the Fédération des Associations Féminines du Sénégal (FAFS), a federation of hundreds of Senegalese women groups, and today serves as the organization’s honorary president. It was through her work with FAFS that Annette, inspired by the organization’s series of profiles on women, began to develop the idea of creating a permanent exposition on women; displaying women-made products, exploring the history of women, and featuring the work of women’s organizations.

Annette is the founder and director of The Museum of Bathily in Senegal, which aims to “contribute its share in education and the valorization of Senegalese cultural heritage by promoting the role and position of women in society.” The museum was established in 1994, based on the ideas of Ousmane William Mbaye (Annette’s son) in collaboration with the Consortium of African Audiovisual Communication, the endorsement of the first woman Prime Minister of Senegal, several museum directors in Dakar, and with support from the Canadian government. At the time of its establishment, it was the first women’s museum in Africa.

Annette utilizes the media as an instrumental tool in generating awareness of women’s issues. In 1996, the Rencontres Cinématographiques de Dakar, an annual film festival in Dakar that she founded earlier in the decade, focused its theme on “Women and the Cinema,” proclaiming as its motto, “When women of the cinema take action, African cinema moves forward.” During these years, Annette also served in several government positions, including Commissioner of the Regional Information in Diourbel and Program Director of Radio Senegal.

Promoting a positive status for women and challenging negative perceptions and portrayals of African women inside and outside of Africa has been the cornerstone of the women’s movement in Senegal for decades. As abrupt economic and political changes have occurred since independence in the 1960s and as traditional societies integrate more and more pieces of modernism and post-modernism ages; women in strongly patriarchal systems in West Africa have lost many of the positive roles they traditionally held. The new cultures also bring new challenges that women are not always equipped to face.

There have been centuries-long traditions of organizing among women through their age groups, work affinities, and family links. When Annette founded FAFS most groups worked for economic empowerment, through cooperatives; some addressed women’s rights issues, and others women’s political status. There have been thousands of women’s organizations rising to respond to the multiple needs of particular groups but they were scattered geographically and didn’t constitute a strong political force.

Even though a lot of activities were engaged, there was also very little capacity to capture what women’s contributions were to the advancement of societies, with very little visibility of their needs and results. Annette thought through and was at the center of the formation of a larger body and of a movement for the advancement of women. Challenging the influence of revealed religions such as Christianity and Islam, and critically analyzing traditional and modern systems, exposes injustices against women and uncovers opportunities to make positive changes.

Annette did this work through FAFS and later through other organizations using artistic, political, and economic opportunities that she combines with the women’s museum today. The challenge is still to radically change the perception of women in and outside of the country through politics, economic forces, and by women themselves, to match the vibrancy, dynamism, and creativity of their participation in society.

The Museum of Bathily aims to exhibit the complexity, richness, and diversity of the lives of women in contemporary as well as traditional Senegalese society. The voice of women in Senegalese society has oftentimes been confined to private life, and thus, there are not many opportunities to celebrate the work of women in the public sphere. Women are often simplified as symbols of feminine elegance, which does not encompass the extent and intricacy of their contributions to Senegalese culture and society. Likewise, issues that concern women are also simplified or neglected, as there are not many spaces or opportunities for public discussions to take place. The lack of dialogue of women’s issues, from reproductive health to divorce, has serious implications for national development as well as individual well-being.

The museum’s exhibitions encourage reflection on women’s accomplishments and spark discussion on issues by presenting the many facets of the economic, political, historical, and cultural roles of Senegalese women. The permanent exhibitions include displays of different ethnic dresses, artistic productions, tools from daily traditional life, biographies of famous Senegalese women leaders, and intellectual work. The museum also houses interviews, movies, and photographs created by women and about women to articulate the diverse roles that women play in Senegal.

Unlike many other African museums, which tend to label traditional artifacts as “tribal” or “primitive,” the Museum of Women showcases the functional aspects of women’s tools and practices, showing how women have contributed to social and economic growth and development, despite often being overlooked in Senegal’s history. The museum exhibitions are complemented by workshops and work training courses that are open to the public and focus on income-generation.

The museum is an educational facility, promoting women’s accomplishments by showcasing their cultural socioeconomic development while also teaching about human rights. The goal is to alter the inaccurate and demeaning perception of the role of Senegalese women in the community for both locals and tourists alike by promoting the positive social position, equality, and freedom of women.

The museum also produces its own research on the changing roles of women in society, and on the challenges they face, and hosts events for the purpose of better articulating the position of Senegalese women of all ethnic groups. For example, the museum hosted a cultural performance of “Melfeu et Gemb” for 127 guests, a conference on women’s resistance (complemented by a photography exhibit, “Women in Movement”), and an event entitled “Women’s Pens” to celebrate women writers. In 2005, as negotiations for a peace treaty concerning the Casamance separatist conflict were underway, the museum organized a colloquium with a women’s group from Casamance to discuss the contributions of women to maintaining peace in Senegal. Every three months, the museum also hosts a conference, which includes debates, guest lectures, and discussions on controversial subjects concerning female circumcision, marriage, sexuality, and other issues that deeply affect women’s lives but are often taboo to speak about openly.

The museum offers introductory training courses in dying, batik production, embroidery, and weaving cloth production (i.e. traditionally considered a man’s work) to the public to promote income-generation among women. The majority of the participants are women of the island, living in Ouakam and Mbao (suburbs of Dakar), and pupils of the female boarding school on Gorée. Recently, the museum organized micro-gardens for the women of Gorée Island. The museum also collaborates with individual women and women’s groups, such as the Diola cloth-weavers and women Potters of Edioungou, by marketing their wares in the museum shop. The museum launched a special program for disabled women, and currently employs two women with disabilities. The program provides them with income-generation opportunities that they would not be able to pursue otherwise in Senegalese society.

In 2000, the museum established a partnership with the Evelyn Ortner de Merano Museum of Women in Italy and jointly organized an international exhibition with the support of Italian and Austrian women organizations, entitled “The Work of Women in Senegal, Italy, and Austria.” In partnership, the Italian museum also provided financial support for 25 young Senegalese women with disabilities. From 2001 to 2003 the museum collaborated with the Beninese government and the Québécois Ministry of Culture and Communications to organize an international exhibit “Women Builders of Africa,” which toured five countries. The Museum of Women is also a member of the West African Museum Program, which promotes collaboration between West African museums by transcending linguistic and geographical barriers.

The Museum of Women is currently under the management of a team of women, who are striving to scale up the museum by building more extensive facilities on land acquired in Dakar, opening a wider range of exhibitions, and becoming sustainable. The museum on Gorée serves as a frequent gathering place for local as well as broader discussions of women’s issues. The museum is also considered by many to be a national treasure and is located in the historical Victoria Albis building, across from the Museum of Slavery on Gorée Island.

Annette has been working on advancing women’s rights and social status in Senegal for many decades. Born in 1926, Annette was educated in Senegal and received her teacher’s degree from l’École Normale in Rufisque, Senegal in 1945. Two years later, she left for Paris to study journalism. Annette was the first professional female journalist in Senegal and has been a pioneer in the struggle against decolonization and a strong advocate for negritude and Pan Africanism. Her radio broadcasts from Paris in the late 1940s were picked up and carried by African radio shows.

Annette returned to Senegal on the eve of independence in 1957. After she received her degree in journalism, she began writing articles on the social problems and obstacles faced by women. However, Annette wanted to “do something [more], for us, the women of Africa, at the arrival of independence.” Thus, with the support of other leaders of the feminist movement in Senegal, she founded the Senegalese women’s magazine, Femmes de Soleil in 1959, which would later be renamed Awa (1963).

Annette stimulates discussion both professionally at the museum and in her social life: She runs an informal open-house in Dakar and hosts lunches on Sunday where female artists, journalists, politicians, friends, and family join in an informal, intergenerational dialogue on Senegalese culture. In 2008, her son directed and released a film, Merbi, which is a portrait of his mother as the first female journalist of Senegal.