Biksham Gujja is the founder of AgSri Agricultural Services, a social enterprise that works to improve income and profits to farmers' and industries while reducing the footprint of present agricultural practices on the environment. From 1993 to 2010, Dr. Gujja worked with WWF-International, based at Gland, Switzerland, where he started and headed the Freshwater Programme. Dr. Gujja was also involved in establishing projects related to high-altitude wetlands and lakes in Himalayas, river dolphins, thirsty crops, developing appropriate responses for adaptation and mitigation of climate change, and traditional water management. Dr. Gujja established and implemented the joint WWF-ICRISAT project to improve the sustainability of agriculture. As part, this joint project two major global interventions - System of Rice Intensification (SRI) and Sustainable Sugarcane Initiative (SSI) – were developed and are now being promoted by many developing countries.

Bill Carter is Director of Ashoka Africa. He served on Ashoka's International Board for twenty-nine years, focusing on strategy development, and is a founding member of the Board. In that capacity, he interviewed many hundreds of candidates to become Ashoka Fellows. In 2009 Bill stepped down from the Board so he could serve as a member of the Ashoka staff. In his current role, Bill guide’s Ashoka’s overall strategy in Africa, oversees the selection of African Fellows, and helps develop and launch new initiatives including a groundbreaking initiative to identify, support, and connect Changemaker Schools across the continent. As a senior civil servant at the Environmental Protection Agency (EPA), Bill led the Agency's effort to create the Federal Government's first approved Agency Performance Management and Incentive System under the Civil Service Reform Act. Prior to serving at EPA, Bill was a consultant at McKinsey & Company, where his assignments were in the fields of education, economic development, insurance and housing. Bill has a Ph.D. in Philosophy from the Fletcher School of Law and Diplomacy at Tufts University.

Christina Ulardic - works for Swiss Reinsurance Company in Environmental & Commodity Markets on the development of weather index and crop yield shortfall risk transfer solutions. She leads origination efforts with main focus on the African continent. Christina built up the “R4 Rural Resilience Initiative", a micro-insurance program to help the rural poor to protect their crops and livelihoods from the impacts of climate variability and change. Christina received her Master of Science, Geology from the University of Freiburg, Germany and Basel, Switzerland. Before joining Swiss Re she worked for the Geological Survey in Chile, the climate change program of the United Nations Institute of Training and Research in Geneva and the German Federal Ministry for the Environment in Berlin. In 2004 she obtained a Master of Public Administration at the John F. Kennedy School of Government, Harvard University.

Claude Béglé - is an entrepreneur with a social vision, who has lived in fifteen countries and worked in over a hundred. With a PhD in Economics, and master’s degrees in Law and International Relations, he worked first for the Swiss Cooperation for Development (Nepal) and the International Red Cross (Lebanon, Zimbabwe), then for Nestle and Philip Morris (Africa, Latin America, Eastern Europe) in Marketing, M&A and Management positions, then in the postal & logistics sector (TNT, Geopost & DPD, DHL) in top executive positions, and then as Chairman of the Board of Swiss Post. Two years ago, he re-oriented his focus towards clean-tech and the political world. He is active in a center-right party, serves as an Ambassador to Arnold Schwarzenegger's R20, and otherwise serves on several Boards in the private and nonprofit sectors. He has a sincere passion for helping developing nations in the field of green economy, water and renewable energies.

David Pollock – is an Ashoka senior advisor since 2006. During the past three years he has been involved in recruiting, training, coaching and mentoring, performance development, and expansion to Japan and China. Prior to Ashoka, David held leadership positions in a number of companies spanning 35 years and living on three continents. The companies include: Stormwater Management Inc. (USA), Kässbohrer Geländefahrzeug (Germany), Hyster/NACCO Materials Handling Group (UK) and Cummins Engine Company (Indiana, the Philippines, Singapore). Throughout his career, David guided organizations to exceptional performance through high degrees of team participation and effective hands-on leadership. David is also active in the Young Presidents Organization/World President’s Organization.

Ingo Weber is a passionate impact investor and entrepreneur with over 20 years of leadership and investment experience in emerging markets and the developed world. Ingo is member of the Investment Committee and part of the team that founded the LeapFrog Inclusion Fund, the largest dedicated investor worldwide in companies that provide insurance to vulnerable people. Most recently, he was CFO/COO of a listed financial services firm and responsible for global corporate development activities at Swiss Re. He spent many years with GE Capital in a variety of leadership roles with responsibilities for Asia and Europe. Ingo also serves as a founding board member of “Partnering for Global Impact”.

Jean-Philippe de Schrevel is founder and CEO of Bamboo Finance. Previously, he co-founded Blue Orchard Finance in 2001 and has since remained a part of its management team. He joined Dexia Asset Management in 2000 as the Dexia Micro-Credit Fund Manager. Prior to that, he was Junior team economist in Romania for a EU PHARE technical assistance program, Field Consultant in Microfinance for a Belgian NGO, an Associate with McKinsey & Co, the Operations Director of a private Microfinance Foundation in Argentina, and finally a Consultant for the UNCTAD Microfinance Unit in Geneva. Jean-Philippe is fluent in French, Spanish and English. He holds a MA in Economics from Université Notre-dame de la Paix in Namur, Belgium, and a MBA from the Wharton School of Business.

Dr. Maximilian Martin serves as Founding Faculty in Residence at Ashoka University, where he works with senior faculty in the United States to enable them to teach social entrepreneurship effectively, and as a Lecturer in Social Entrepreneurship at the University of St. Gallen. His previous work includes creating the first university course on social entrepreneurship in Europe at the University of Geneva, which he has kept teaching since 2003, and Europe’s first wealth management philanthropic advisory and knowledge exchange platform, UBS Philanthropy Services and the UBS Philanthropy Forum, which he established as the Bank’s global lead offering for the ultra-high net worth segment (2004-2009).
Nicolas Borsinger

Nicolas Borsinger has been Secretary General of the Foundation "Pro Victimis" since March 2000. Prior to this he was with the International Committee of the Red Cross (ICRC), where he served in the field as head of mission (Armenia, Tajikistan, Chechnya, Georgia), deputy head of regional delegation (Buenos Aires), advisor to the Secretary General of the Canadian Red Cross (Ottawa), field coordinator or head of sub-delegation (Azerbaijan, Romania, Croatia, Israel and Occupied Territories), and delegate (Ethiopia, Thailand/Cambodia). At ICRC headquarters he has been head of sector for the South Caucasus and Central Asia in the department of operations, as well as head of sector for Iran, Iraq and the Arabic peninsula. He has degrees in agricultural engineering and environmental engineering.

Nihar Kothari is the Director and Executive Editor of the Patrika group of companies. He is currently in charge of editorial planning and readershipdevelopment of the newspaper. Nihar holds a Masters Degree in Economics from University of Rajasthan and is an alumnus of the Indian Institute of Management, Ahmedabad and Kellogg School of Management, Northwestern University, Illinois. Rajasthan Patrika (owned by Patrika Group) is one of the largest media houses in India owning newspapers, cable networks, electronic media, radio stations, outdoor media, event management, education, mobile publishing, web publishing, publication, yellow pages etc. The flagship activity is Rajasthan Patrika, one of the largest circulated Hindi dailies of India  with several editions across the country.

Philip Riddell is the director of Indo African Agricultural Capital Ltd and independent consultant in irrigation/water policy and management. Projects Philip worked on have varied from micro-initiatives at the grass roots through national development plans to regional policy research and advocacy strategies in both the development and conservation sectors and include consultancies and deal formulation in the private agribusiness sector. His work experience comprises short-term studies and investment formulation, as well as long-term assignments as Chief Technical Adviser on ADB, Danida, FAO, UNDP, and World Bank funded programs.

Shiv Sivakumar is the Group Head of Agri and IT Businesses of ITC Limited, India. He runs a Billion Dollar Agri Business, is the Vice Chairman of ITC Infotech - a global IT services company, and the Chairman of Technico - an agri biotech company. Sivakumar is well known as the architect of ITC eChoupal, a pioneering click & mortar network that connects rural India to global markets. ITC eChoupal has won several awards including UNDP’s World Business Award. Sivakumar is a Director on the Board of Indo-US Knowledge Initiative in Agriculture. He is a Member of the Private Sector Committee of the Consultative Group on International Agricultural Research (CGIAR). He is also an active member of the management committees of various industry bodies and several taskforces of Government of India. Topper of the Class of 1983 from the Institute of Rural Management, Anand (IRMA), Sivakumar served a farmers' cooperative for six years.

Waltraud Martius is an active co-founder of the "Austrian Franchise Association" (ÖFV) and since 1986 in an honorary capacity in the board of directors. In 2008 the honorary presidency was lent her. For 20 years she is a lecturer at universities and advanced colleges in the German-speaking space and has transmitted her experiences in countless talks in Europe as well as in the USA, India and China. She is a co-editor of the book appeared in 2003 "Franchising – Die Königsklasse der Vertriebssysteme (Franchise - The king's class of the distribution systems)" and author of the book „Fairplay Franchising“, which has appeared in 2008 and as second edition in 2010 in the Gabler publishing company. In 2011 she was elected senator of the “Economic Senate” and works as a Pro Bono-Expert for ASHOKA International.

Wolfgang Hafenmayer is the Managing Partner of LGT Venture Philanthropy. Wolfgang and his team on five continents support organizations with outstanding social and environmental impact. Wolfgang gained rich experience as investment manager with BonVenture, and helped set up Forma Futura, a sustainable asset management company. Previously, he was the executive director of the IT and management consulting firm Consileon and worked for Bain & Company. During a trip around the world he interviewed 230 social entrepreneurs, politicians and scientists and recorded his findings in his book "Die Zukunftsmacher". Wolfgang holds a degree in economics from the University of St. Gallen, Switzerland. 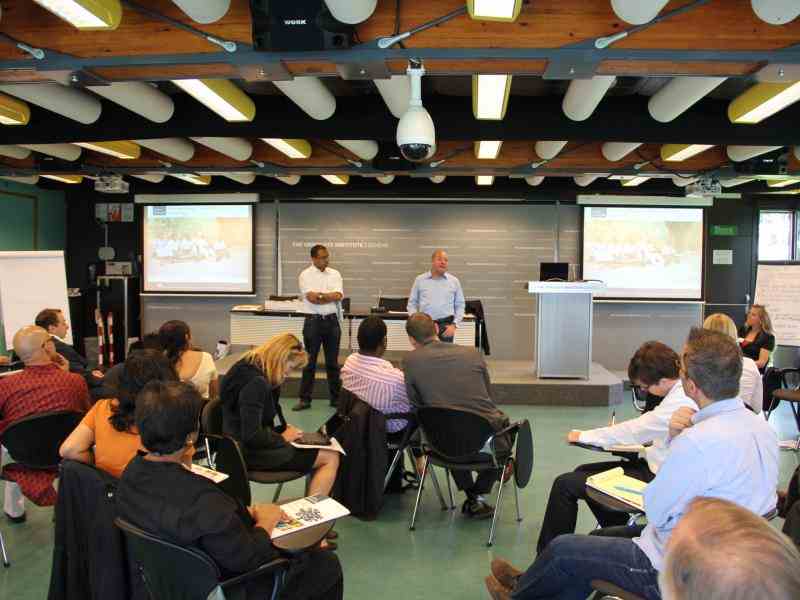 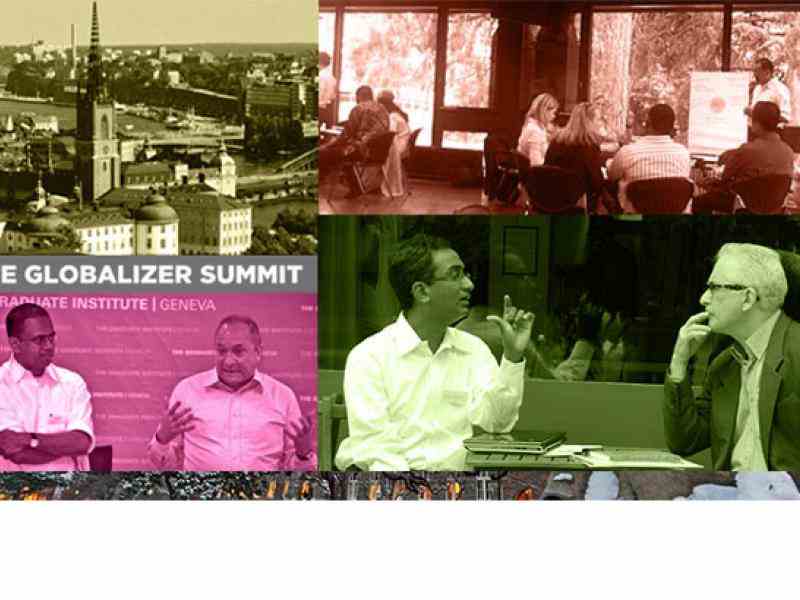