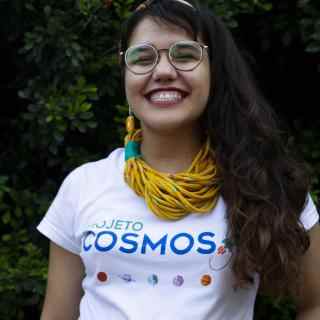 Carlla studied in multiple public schools around the city of Manaus when growing up. With each move, she witnessed the impact of education inequality, bothered by the distinctions in opportunities and resources between schools that reflected larger social inequalities. Carlla eventually attended a well-regarded technical school, but felt unprepared for her science coursework. Her new school offered a science olympiad in astronomy. Determined to participate, Carlla taught herself astronomy, going on to win a bronze medal in the olympiad. Through self-teaching, Carlla discovered that she more thoughtfully questioned the world around her and opened her mind to new ideas. In college, Carlla and four of her friends co-founded Projeto Cosmos to teach astronomy in public schools by preparing students for the Brazilian Astronomy and Astronautics Olympics (OBA). The venture promotes scientific learning for young students through workshops, talks and interactive journeys. Carlla believes that astronomy enchants young people, heightening their curiosity and acumen for critical thinking. Completing five years of existence, Projeto Cosmos has already impacted more than 2 thousand students and is recognized and awarded nationally.

Watch this 3 min video on Carlla's journey as a changemaker