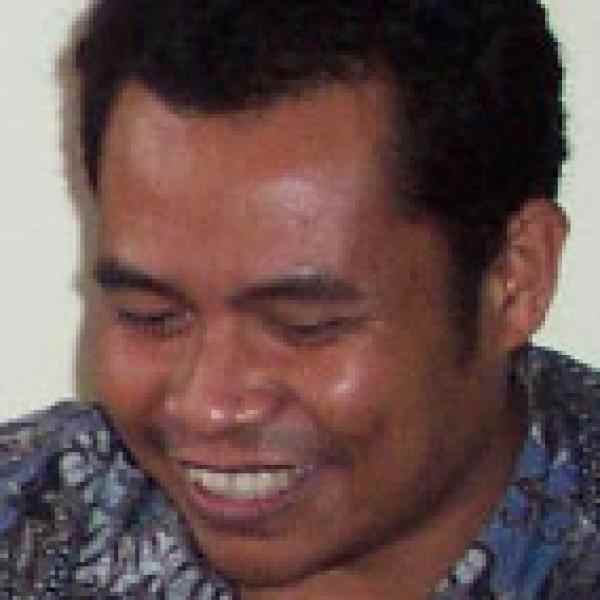 Silverius Oscar Unggul, together with his organization JAUH from Southeast Sulawesi, is helping villagers manage their own timber enterprise and become key players in the highly competitive market for “green” or certified environmentally friendly timber. Through a collective working mechanism, communities are now able to manage an eco-friendly teak plantations and earn up to four times more income. This model has given the local communities an economic incentive and a stronger sense of ownership over valuable forest resources. Through their success in the “green” timber industry, Silverius is proving that local community cooperatives can and should play a major role in sustainable forest management.  In the timber processing industry, only 10 percent of the companies are able to work towards obtaining eco-label certification for their timber. Silverius has proven that community cooperatives are capable of complying with the stringent requirements necessary to obtain the much coveted certification from the international Forest Stewardship Council’s SmartWood program. A pilot program has been implemented by the cooperative in South Konawe District with over 300 members from 12 villages.Silverius, his team, and the community have also been able to lobby the Indonesian Forestry Ministry to implement a social forestry program. Under this Forestry Ministry decree, the people living in and around the forest will be granted concessions to manage the state’s regulated forest areas. The plan will cover 38,959 hectares of productive forest and will involve 8,534 households or 17 percent of the total population in the South Konawe District.  This is a significant decree because up until then, local communities had very little access to state forests. Considering the growing demand for “green” timber worldwide, Silverius is working with his allies to spread his community-based model throughout the country.

Out of the 120 million hectares of Indonesian forest, more than 101 million are in critical condition and only 19 million hectares are still relatively untouched. If the current destructive logging practices persist, the Indonesian rainforest will disappear within five to ten years. Most of the existing forest conservation efforts tend to focus on advocacy for policy change but are unable to compete with the excessive global demand for timber. There is also little opportunity for people living in the forests to become involved with the management of forest resources. Under current laws, local communities are only allowed to manage non-timber forest products, whereas timber, the most valued forest resource, is managed by the state and private companies.Unfortunately, in an effort to meet such a huge demand for their products, the timber industry has been managed unsustainably. Forest concessions exploit the land and some businesses use the local residents to obtain their timber illegally. Illegal logging has contributed to two thirds of the forest destruction in Indonesia and the rate of deforestation has become one of the highest in the world. In such a chaotic system, there has not been any effective monitoring mechanism to oversee the quota system for the harvesting of timber.Alternatively, the demand for “green” business among consumers and buyers of forest products in countries such as Japan, China, and the United states is starting to grow. Only products that are legal and environmentally friendly can enter their markets. This trend is supported by the eco-label certification movement. Nevertheless, to date only three out of more than 100 timber processors in Indonesia have received certification.  Most companies are reluctant to go through the certification process because it is expensive and many of them are still dealing with legal land disputes.At the field level, unclear forest land ownership and unrecognized tenurial rights of the local people have perpetuated the problem. Conflicts over tenure, which involve the local residents, the government, and the concessionaires, have been an obstacle in the realization of sustainable forest management in Indonesia. Ideally, management of the forests would be shared among the state, private companies, and local communities.

Silverius is working to include village communities throughout all the phases of planning and building sustainable timber enterprises. In his model, a coordinating body manages the institutional and forest area management, while a cooperative manages the community-based timber business. A year after the first pilot was initiated, each member of the cooperative received RP 1,445,000 (US$160) for every cubic meter of timber sold in three months. This is four times more than their previous income. At the end of the year, the cooperative was also able to share dividends from its profits with each member. The new community timber business also had a significant impact on local government revenue.  The community-based timber enterprise has given local residents the right set of economic incentives to become key players in the timber industry and contributors to sustainable forest management. Silverius took several steps to ensure the efficiency and competitiveness of the business. He helped the villagers collect data on potential teak availability and created a timber production plan. He also connected the community with national and international buyers . The community in turn took ownership of the business and made arrangements for the breeding and replanting of seedlings. They organized a community forest watch to help enforce regulations and guard against illegal logging – a watch system now being replicated by six neighboring villages. The group also opened up a new sawmill business for its members which provides the cooperative with an additional revenue stream. All of these endeavors have been supported by a partnership between JAUH, the community cooperative, and the Tropical Forest Foundation (TFT) for eco-label certification. The community facilitated the certification process of SmartWood as it conducted an assessment of the cooperative’s operations. Three months after the SmartWood team conducted the assessment, the cooperative received the eco-label certificate issued by the Forest Stewards Council (FSC) in May 2005. According to the FSC, the certificate is the first granted to a community cooperative in Southeast Asia. The certification process itself helped the community understand the values behind sustainable management and gave them hands-on experience in managing a “green” timber business. Running the “green” timber business has helped prepare the community to play a larger role in Indonesia’s sustainable forest management by managing state-owned forest land as well. Through Silverius’ lobbying efforts, the government will give the community cooperative a concession of 38,959 hectares. Given their experience in the industry, the community is now able to adequately prepare for this upcoming project.  They have crafted a long-term forest management plan and created a nursery that will facilitate the replanting of ten seedlings for every tree they cut down. They expect to have 500,000 teak seedlings ready for reforestation once the concession begins.  The community’s valuable expertise has made it a learning center for other villages that are interested in entering similar “green” business ventures. Silverius has joined several citizen sector networks and hopes to spread this model nationwide.

Silverius, a 35 year-old father of two young children, was born and grew up in Kendari, Southeast Sulawesi. As a child, he was greatly influenced by his parents’ stories and tries to share similar values with his own children. In primary school, he was a boy scout and joined the national jamboree. In high school, he was active in student organizations and excelled in sports. During his time at university, Silverius became heavily involved with environmental causes, and began working with indigenous populations in his free time on small sustainable development projects. In 1998, immediately after his graduation, Silverius and his friends established Yascita, a citizen sector organization promoting natural resource-based economic development.  Throughout this time, he was increasingly concerned about the large-scale environmental destruction in Indonesia. He began to document the illegal logging practices of private companies in Southeast Sulawesi. However, none of the local media would publicize his highly controversial field findings.  Unfazed by this challenge, Silverius and his friends decided to establish a community radio station called ‘the Voice of Nature.’ This station delivered information on local environmental issues and natural resource management. Since its creation in 1999, ‘the Voice of Nature’ has been one of the biggest and the most popular radio stations in the province. To have broader and more effective impact, Silverius also chose to set up a local TV station, TV Kendari, in 2003. This became the only station in Indonesia founded by a citizen sector organization with a very small seed investment. Silverius wanted to raise the people’s sense of ownership of local media and information. He developed TV programs that were run by the local community because he wanted to change the public perception that developing a TV program was too difficult and costly.  Having understood that addressing major environmental issues would require a collective effort, Silverius, together with other five local citizen-sector organizations, the Voice of Nature radio, and TV Kendari, built a network called JAUH in 2003. The mission of the organization is to share the knowledge and create the economic incentives that will allow local people to become major actors in environmental conservation.