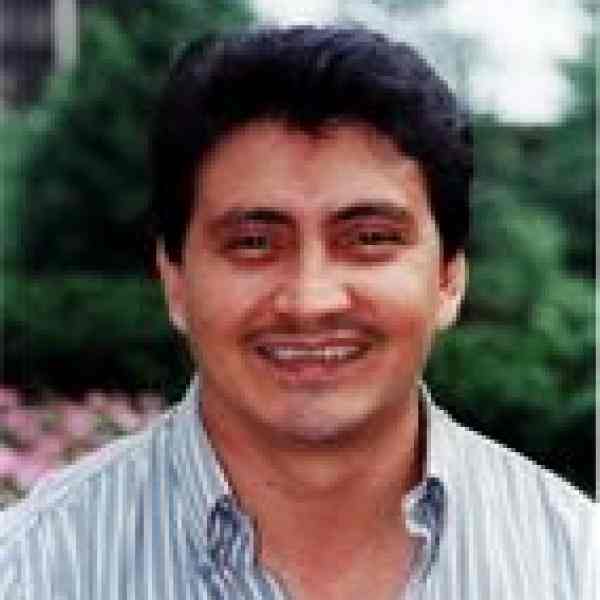 César Cárdenas is transforming the field of youth development in Ecuador through the systematic application of the principles of youth participation in all aspects of public life. In so doing, he is actively subverting the typical "one-way road" of adult-youth relations in Latin American culture to an exhilarating two-way thoroughfare.

César Cárdenas is demonstrating how to bring about effective youth participation and even youth leadership in all aspects of Ecuadorian life. His first objective is youth development, but he understands that community participation is essential to self-improvement. César's work shows that training youth to develop effective voices in family, civic organization, community and even national political life benefits everyone. César's youth-run My Kite (Mi Cometa) group has earned the respect of adults in poor urban neighborhoods by hard work. By planting trees, cleaning garbage from the streets and raising awareness about infectious diseases, these young activists show adults that they care about their community. Subsequently, these young leaders have become an authentic community voice on youth issues. At the national level, My Kite youth members initiated a proposal for a National Congress of Youth (involving a youth ex-officio role in the national parliament). My Kite has quietly served as the informal secretariat to this idea, with César successfully convincing a working group of (adult) members of the Forum of Children's Organizations to support the proposal. This case illustrates the cardinal rule of César's work: youth implement their own leadership formation. He supports the youth champions of a National Congress of Youth not because he supports the Congress idea (although he does), but because he is convinced by the passion and dedication of the youth championing the proposal.

If you are a child in Ecuador today, odds are that you have several siblings, most of whom, like you, are working to contribute to the family's meager income. You are almost certainly poor. There is a one in three chance that you are malnourished. If you live in the city, you do so under intensely crowded conditions in which the urban planner estimates there are 80 centimeters of green space "per child." These are the facts of life in a poor country like Ecuador. At a deeper level, as a child you experience another kind of poverty that is spiritual and cultural and is not confined to those without material means. This might be called problem of parenting and politics of Ecuador, and, indeed, of Latin America more generally. It is the problem of the disempowered role and status of children in society. As a child, you are taught that your role is basically to accept adult authority. If you wish to know authority yourself, you must wait until you are grown up. One statistic that directly reflects your lack of authority as a child is the fact that one out of every three children is sexually abused by adults. The most vividly ironic examples of this may be found in the many so-called youth organizations, many of which run "youth leadership" programs, but which are in fact adult-run organizations for youth. They typically end up reinforcing the stunting culture of adult authority over the very youth they purport to serve. One consequence of this problem of parenting and politics is that the swelling numbers of unemployed youth have no sense of self-determination and self-development. The largest segment of the population, they have no history of self-organization and no sense of their importance to society. Under these circumstances, the best of the youth lack conviction and direction and those more vulnerable easy prey for criminal youth gangs and drugs. In this setting and against this background, it is no wonder that urban communities are characterized by a lack of social cooperation and community participation, graphically symbolized by the waste left lying in the streets.

At the broadest level César's strategy is to create circumstances in which youth leadership is accepted and even supported by adults. Whenever this happens, two objectives are furthered. First, youth participating are learning, growing and maturing in desirable ways. This is vital for society's future. Second, the pervading "adult authority" culture is implicitly being subverted. César's first step was to initiate a local youth-led organization-My Kite-and lure adults into supporting it. In 1990, César quit his job at a quasi-public child welfare agency and began to work informally with several groups of kids in poor neighborhoods. Things progressed until there were twenty groups of young people and over a dozen adult (all women) volunteers working with César. A workshop on environmental protection inspired the young people to promote urban ecology. They organized an ecology fair, including a kite flying competition. After the highly successful event the children dubbed their organization My Kite. By late 1991 the organization was sufficiently consolidated that he and the youths were able to formalize its structure using a board of adults (required by law), who all had to accept the principle of youth leadership. The next step was to establish the credibility of My Kite in the community more generally. They began a series of highly-visible neighborhood campaigns designed to improve general conditions and win respect for youth, including community beautification projects, refuse/waste management, tree planting (10,000 trees) and public health promotion. One program, Plant Life, launched by My Kite teaches children and their parents how to work together to solve community problems. With branches in 38 communities, it promotes self-help and cooperative work, notably highly successful tree planting and youth waste collection campaigns. In Guasmo South, a very poor area, My Kite sponsored training workshops for children, parents, teachers and community leaders. A collaboration among a number of community groups resulted from these workshops that is led by youth from My Kite and adults together. Choosing to focus on physical infrastructure efforts, collaboration has resulted in the construction of new classrooms, installation of new water systems, playgrounds and roof repairs for some 21 neighborhood schools. The strategy worked: My Kite became an authentic community voice on youth issues. César and others at My Kite even went to jail for participating in community demonstrations, earning further credibility within the community. As this urban-level work was evolving and gaining visibility due to its considerable success, César opened up a second front in his war on the pervading paradigm of adult-youth relations: that of the so-called youth organizations throughout the country. Here César took advantage of the first national gathering of the country's 150 youth organizations. In 1996, My Kite completely transformed the first national meeting of the National Forum of Children's Organizations (all represented by adults), with the participation of youth delegates representing 250,000 children and adolescents between eight and fifteen years old. The meeting turned into a dramatic showdown between the paternalistic adult managers of the 105 organizations present and a new undaunted youth leadership empowered by a careful consultative process that over many months had constructed a "mandate" for them at the meeting. When the youth delegates saw that their proposals would not be given a true hearing at the meeting, they walked out and set up a parallel meeting of their own, loudly announcing their concerns to the press. The publicity had a huge impact and the youth have developed a follow-up proposal to establish an alternative National Congress of Youth. Youth from throughout Ecuador are supporting it strongly. My Kite has served as the informal secretariat to this proposal and has also made considerable headway in winning support for it from the more progressive elements within the old guard youth organization adults. César convenes a working group of members of the Forum of Children's Organizations, for example, to support the proposal and, more generally, to give greater attention to the principle of meaningful youth participation and youth leadership. Looking ahead, Cesar is increasingly turning his attention to the ways and means of communicating the My Kite model. He is writing up a detailed methodological study detailing his approach, which is sometimes threatening to adults (but not to kids). At the same time, he is working to strengthen My Kite as a sustainable local organization, which is still, despite its national prominence, a young organization working in a very poor community.

César grew up in a comfortable home with loving parents. This background gave him the self-esteem and self-love he needed to realize his dreams. These are benefits that he believes should be the birth-right of every child born in Ecuador. He came to My Kite through a fortuitous combination of the negative and the positive, frustration and inspiration. After several years working in a quasi-public children's welfare agency, he was becoming increasingly frustrated and despondent about the capacity of the agency to truly comprehend the children it sought to serve, and of the possibility of making useful contributions through his chosen field of social work. The agency did not heed his ideas, and he quit his job and began to work informally with groups of kids in the poorest neighborhoods in the city. These informal experiences were profoundly freeing for César and, over a period of 24 months, he quietly found his own distinctive way of working with young people, of enabling them to take authority and leadership as they never had before. Despite the inspiring progress of My Kite, Cesar reports that he would never have moved so quickly to national impact were it not for the inspiration of Mexican social entrepreneur Gabriel Benitez, who came to Guayaquil with his family in 1995 to continue his pattern-setting work with disadvantaged youth. Gabriel, who had founded Mexico's premier street children organization, befriended César and encouraged him to "dream great dreams." It was Gabriel who nominated César as an Ashoka Fellow, a mere six months before he died from a rare virus. César mourns Gabriel as one of the true heroes of the field of disadvantaged youth. "His memory is my greatest inspiration," says César.