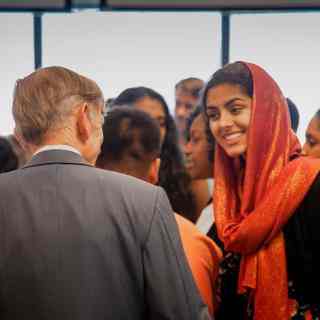 Sarah and her team did not just start a club, they started a movement - a movement to change how her peers think about and interact with students with intellectual disabilities.

Through self reflection, Sarah discovered a personal and cultural unconscious bias throughout her school towards students with intellectual disabilities. Instead of ignoring the issue, she formed a team and together they strive to remove the stigma against students with intellectual disabilities through AWARE. The team is not only co-leading a club, but rather a multi-school movement of young people to create welcoming environments through awareness, education, and interaction. Sarah’s journey shows that changemaker initiatives are more impactful when they involve other young people to sustain, spread, and scale a social mission while vicariously inspiring more young people to find their own power and create positive change.

Learn more about Sarah's journey to becoming a changemaker.

Get an inside look at the life of Ashoka Young Changemaker Sarah.

The Power of Changemakers

Sarah and her team participated in the Ashoka T-Mobile Changemaker Challenge, joining a powerful network of young changemakers across the United States. Read more about their experience.