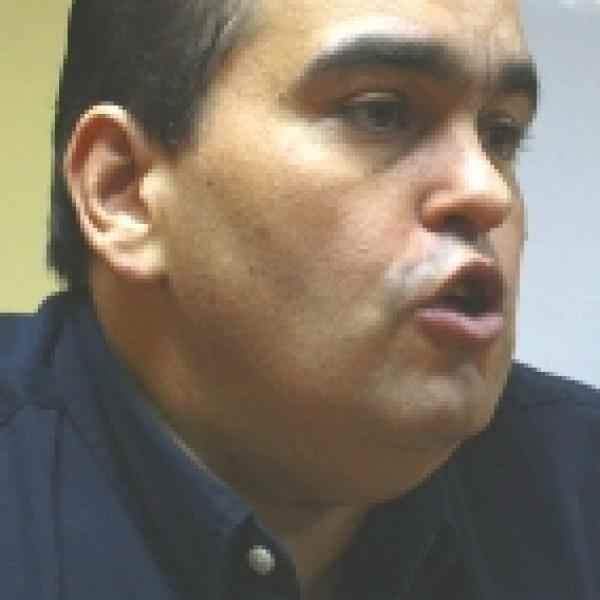 By framing freedom of expression and access to information as both human rights and social responsibilities, Carlos Correa is working to build accountable and socially conscious journalism in Venezuela. Through his organization Espacio Público, Carlos is bringing together professional journalists and ordinary citizens to create a culture of reliable, accurate reporting on the current social and political situation in Venezuela.

Through Espacio Público, Carlos is building cross-sector alliances both inside and outside Venezuela to connect journalistic practices with grassroots communities. Instead of advocating for the freedom of speech of a particular ideological group or other sector of society, Espacio Público urges all of Venezuelan society to see freedom of expression as a fundamental human right. Ultimately, Carlos aims to build a culture and practice of quality journalism, or communication that is both free and committed to social values, through his work with journalists, citizen groups, academics, and public authorities.

Carlos is taking advantage of the current political polarization in Venezuelan society to transform both ordinary citizens’ and journalists’ attitudes towards freedom of expression and access to information. Journalistic reporting often comes under state pressure or outright control and skims the surface of social, political, and economic reality in Venezuela. Without critical and independent media, there is neither government accountability nor a true understanding of social problems. At the same time, ordinary citizens are often indifferent to the current state of the media, further widening the gap between the media and civil society.

To propagate his work, Carlos has formed strategic alliances with networks of human rights organizations, citizen organizations (COs), and universities. Given his framing of freedom of expression as a human right rather than a political one, there is a natural affinity between Espacio Público and human rights groups. The alliances with COs and universities are critical to Espacio Público’s vision of a broad intersectoral appropriation of freedom of expression and access to information not only throughout Venezuela but elsewhere in South America.

Current media coverage in Venezuela is largely disconnected from ordinary citizens’ lives and vice versa. On the one hand, Venezuelan media lacks the knowledge and tools to cover the stories that are most relevant to citizens’ social reality, both in the cities and in rural areas, and much of the media coverage of social problems tends to be superficial or sensationalist, without a deeper analysis of the root causes or how they affect people’s daily lives. Many news sources increasingly serve the private interests of their owners rather than the public interest. On the other hand, citizens and the community groups that represent them lack the skills and the access to communicate important events and developments to the media. Ordinary citizens passively accept the status quo in Venezuelan journalism and, through that tolerance, fail to appropriate their rights to freedom of expression and access to accurate public information.

The absence of an independent, socially committed communications industry that monitors government actions in Venezuela has contributed to the country’s polarized and increasingly anarchic political scene. Witnesses report everything from flaunted traffic laws to violent murders committed in broad daylight in Caracas, but few of these stories are properly reported in the media. Citizens’ ability to act is largely limited, partially by the state and partially by the polarization in Venezuelan society. The media, which should serve as a key instrument for citizen participation in political and social processes, is compromised in its role. In the last few years, state violations of freedom of expression have evolved from verbal or physical attacks on victims to long, drawn-out court cases that intentionally put victims under significant psychological, physical, and economic distress.

Freedom of expression is fundamental to many processes of societal development, including democratization, economic development, social progress, and respect for human rights. Without a citizenry and a communications sector that work together to appropriate freedom of expression and access to information as both rights and responsibilities, Venezuela is in danger of remaining an unlawful and deeply polarized society.

Founded in 2002, Espacio Público acts along three strategic lines: Connecting the media and civil society; raising public awareness of violations of freedom of expression and holding the state accountable for these violations; and building the infrastructure for an independent and socially responsible communications sector in Venezuela. Each of these components is designed to identify and spread quality journalistic practices in which ordinary citizens play an important role.

At the heart of Espacio Público’s work are a social observatory on freedom of expression and a series of alliances and workshops linking professional journalists, academics, and grassroots organizations. Each strategy pushes the media and civil society alike to position freedom of expression and access to information as both rights and responsibilities. At the same time, Carlos uses the social observatory’s findings and the workshops to equip professional journalists as well as ordinary citizens with practical tools to articulate social realities in Venezuela as they experience it. Espacio Público’s social observatory is innovative because it links different societal sectors and proposes concrete changes and practices. For example, the observatory not only studies underreported topics in the media, such as public security, but also identifies experts who can contribute to broader and deeper coverage of these topics and trains journalists to work with these new sources.

In the workshops, Carlos brings together grassroots organizations, universities, and journalists in a collaborative effort to advance quality journalism in Venezuela. In addition to forming working relationships with thirty local COs, Espacio Público has constructed alliances with several major universities throughout Venezuela—including a network of academics interested in the topic of public access to information—and various journalistic associations and journalism schools. Espacio Público runs two types of workshops: Practical workshops that train citizens and journalists alike in how to cover socially relevant stories, and thematic workshops that bring together different sectors of society to discuss cross-cutting issues like public security. Espacio Público documents the results and sends the information to academics and journalists, encouraging them to incorporate best practices into their work. For example, Espacio Público works closely with a regional newspaper that is interested in deepening its social coverage in local communities. Carlos has held a series of trainings with the newspaper’s reporters, two regional universities, and local COs to jointly articulate a social agenda for the newspaper that will help analyze and resolve local problems.

Espacio Público has also established a legal defense program in which Carlos and his staff identify strategic court cases that they believe will have a broad impact on public policy. Espacio Público provides legal advice and accompaniment to the defendants in these cases as they proceed through the courts. Another critical component of Carlos’s strategy is institutional development to ensure Espacio Público’s permanence in the difficult social and political environment in which it works. Besides consolidating personnel and office infrastructure, Carlos is also strengthening the role of the organization’s general assembly and international advisory council, systematizing operations, and instituting multi-year strategic planning. Ensuring Espacio Público’s long-term presence in the Venezuelan communications industry will create a role model for the rest of the field in the future.

One of the key strategies undergirding all of Espacio Público’s work is Carlos’s decision to frame the question of freedom of expression as a human rights issue rather than a political one. Espacio Público’s training workshops always include participants who are public officials aligned with President Hugo Chávez’s government as well as opposition members and others throughout the political spectrum. Moreover, Carlos’s social observatory and legal accompaniment services include monitoring and follow-up in cases where the victims write for official state publications as well as opposition newspapers. This decision lifts Espacio Público above the current political fray in Venezuela and reinforces the link between Carlos’s work and universal human rights issues.

Carlos believes that the current polarized situation in Venezuela is actually an opportune moment to reshape the relationship between the media and civil society. As Carlos looks ahead, he anticipates the consolidation of Espacio Público’s role as a nexus for different social sectors to work together towards quality journalism in Venezuela with the support of international governments and human rights organizations. As Espacio Público grows, Carlos plans to work closely with local social leaders to promote quality journalistic practices, thus generating multiplicative change in the way that information is communicated and accessed in Venezuela.

Carlos founded Espacio Público while working with a national radio network, Fe y Alegría, and the largest human rights organization in Venezuela, the Programa Venezolano de Educación-Acción en Derechos Humanos [Venezuelan Program of Education-Action in Human Rights] (PROVEA). In April 2006, Carlos left PROVEA to assume the post of Executive Director of Espacio Público. The organization is overseen by a General Assembly and a Board of Advisors, while day-to-day operations are managed by Carlos and a team of six full-time employees. Espacio Público has primarily been financed by private foundations and international governments.

Carlos was born and raised in Puerto la Cruz, a beach town of 70,000 people located 100 kilometers from Caracas. He recalls learning to read newspapers before entering school because his father was an avid reader. From an early age, he developed a love for newspapers, magazines, and literature. In high school, Carlos was an active leader in student government and social work involving children.

Carlos moved to Caracas for college, studying social communication at the Universidad Católica Andrés Bello. He found Caracas overwhelming after his small-town upbringing but also filled with cultural opportunities. While in college, Carlos began volunteering with the radio broadcasting arm of Fe y Alegría, Venezuela’s largest network of public schools in extremely poor areas, which is managed by the Jesuits. Over thirteen years, Carlos rose through the ranks to become Director of Fe y Alegría radio broadcast network. During this time, he trained community reporters, promoted community participation in the media (particularly in marginalized urban zones), and coordinated educational programs at the Instituto Radiofónico Fe y Alegría (Fe y Alegría Radio Institute). One of his driving motivations at Fe y Alegría was the democratization of communication, covering topics that were underrepresented in traditional media, and reaching a broad audience.

From 2001 to 2006, Carlos worked for PROVEA, Venezuela’s largest human rights organization. As general coordinator of PROVEA, he oversaw many internal changes as Venezuelan politics and society were becoming increasingly polarized. Carlos’s experience in social communication at Radio Fe y Alegría and his human rights work at Provea equipped him with the vision and skills to lead Espacio Público at this challenging time in Venezuela’s history.