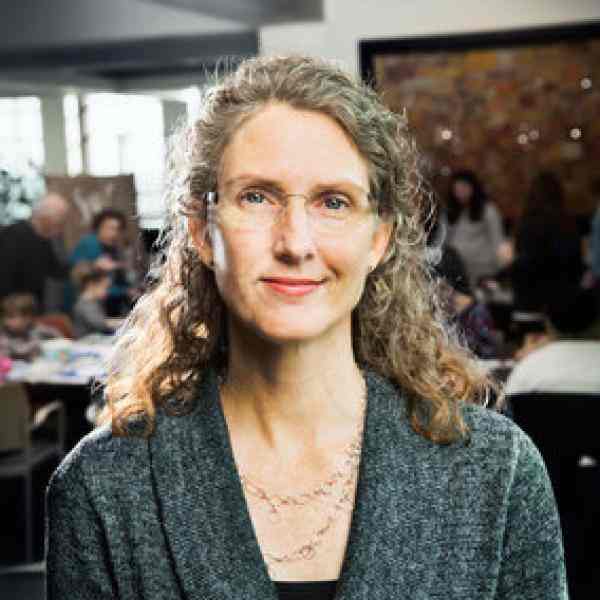 Anne Basting is transforming the experience of aging and the stigma around dementia and memory loss by empowering older adults and their caregivers with new practices rooted in creative expression and community building. Having demonstrated the impact at the individual level, her sights are now set on transforming institutions of care into cultural and community centers of creative expression and growth.

Anne Basting transforms aging from a time we associate with tragedy and loss towards something we understand as a period of growth and possibility. At the core of her work is an insight she arrived at nearly a decade ago during a breakthrough in leading a group session at a memory care facility. Put simply, we must “forget memory, try imagination.”

Over the last 7 years, she’s refined a model that can be taught to anyone -­‐ from volunteers to direct care workers, from family caregivers to nurses – and that becomes the soft tissue that anyone can use to connect with the elders in their care. Anne has been replicating this “TimeSlips” approach, wrapping research around it, and disseminating it as broadly as possible with trained facilitators in 43 states and 14 countries.

Now Anne is asking, “can you infuse creativity into an entire care system?” Anne is working to revitalize the systems surrounding aging care to ensure that they meet people's community support and engagement needs. She is now showing that engaging in meaningful and creative work and sharing it with the wider community helps people realize their existing capacity and strengths and reduces the stigma, isolation, and loneliness that is increasingly common with aging and frailty.

Aging and memory loss in our culture are shrouded in fear, anxiety, grief, and the pressure to remember. When someone first starts to experience memory loss, there’s a good chance he or she will stop talking out of fear of saying something wrong or being found out. Even the word Alzheimer’s is heavy. When you say it hangs in the air, and then drops like a lead weight. And the places for people with Alzheimer’s are heavy places. People in these environments are weighted down by isolation, by stigma, and often by chemical restraints like antipsychotics.

Nursing homes, like schools and prisons, are designed to manage behavior, not to bring people into meaningful engagement with one another. Humans cannot tolerate social isolation, yet many elder care facilities effectively practice “group solitary confinement.” People may appear to be in groups, but there are barriers around them. Sometimes this is a result of people's symptoms, but mostly this is caused by toxicity of the environment, or by habit. The staff is too busy, residents' families are unable to visit, and individual residents are afraid to make the first move, especially when grappling with disabilities that make communication difficult. Each person in a nursing home day room can be incredibly isolated, surrounded by equally isolated people. This type of social isolation has severe health costs. Conversely, building a social network as well as a sense of purpose and mastery in someone's life has been shown to have a positive impact on health, particularly mood.

Now that people are living longer and more of the population is older, we must transform long-­‐term care into an experience we and our loved ones can face without dread. Homes for older adults move people to the periphery of society, and are typically homogenous. Living alone as an older person can be equally isolating, with one's ability to move in the wider world often severely restricted by ability and circumstance, and the visitors that make up the bulk of one's human contact can often be care workers like nursing assistants or Meals on Wheels volunteers. These environments and situations cannot truly meet people's needs unless they address the need for community and purpose.

Anne’s hope is that we can redesign elder care systems around the goal of bringing people into meaningful engagement.

Her work is focused on catalyzing creativity to bring meaning and purpose to late life regardless of physical or cognitive disability. She shifts from the pressure to remember and weakness of memory loss to the freedom and strength of imagination. The role of the arts, a key catalyzing force in her model, is to bring people out of isolation and into connection.

Her breakthrough project, TimeSlips, is an improvisational storytelling method in which older adults with cognitive impairment imagine stories and poems in response to inspiring cues. She has refined and transformed TimeSlips into a formal therapeutic protocol guided by her fundamental insight that the creation of new stories can be an enriching substitute for lost memories. Her focus for the last decade has been on building the field, primarily through spreading an online training for staff, family members, and students. This helps caregivers shift from focusing on the disease to orienting around something sharable, generative, possibility-­‐ focused and conversation-­‐changing.

TimeSlips has been a non-­‐profit social enterprise from the start -­‐ with fee for service training and a goal to make creative engagement standard practice and self-­‐generating -­‐ by inspiring people who go through the training to create modules that further inspire others to take up the approach. The method is easy for caregivers to implement; in the most basic form, simply share a picture and ask an open-­‐ended question.

Having seen the work take root and spread across more than 40 states and a dozen countries at the individual level, Anne’s new direction with her Creative Community of Care training is about using creativity to build community and transform health centers into cultural centers. In this way, they are shifting nursing homes – which number some 15,000 in the US alone -­‐ from being places that no one wants to visit, much less live in, to a vital part of a cultural community and the venues for art exhibitions, live theater, and cultural exchange. This grows out of Anne’s experience of taking residents in a nursing home on an ambitious journey to create a long-­‐ term care community that engages its residents in challenging, meaningful art-­‐making. Her first attempt along these lines was in 2008 when, at a 1,000,000sqft facility with 700 residents and 700 employees, she and collaborators from a professional theater company, the local university, and beyond produced scores of programming centered around a reading of The Odyssey. The residents then created stories, origami birds, poetry, paintings, and built an improvisational narrative around loss and waiting that was staged as a multi-­‐site play with actors bringing scenes to life all along a ¾ mile long path through the facility (that was marked by a custom weaving of the same length). Art classes, university professors’ lectures on Greek mythology, and the final production itself opened up the facility for an outside, paying audience, transforming their nursing home into a cultural center and drawing the community together.

The work of reimagining the role of elder care facilities and their relationships to arts-­‐institutions isn't just about creating magic moments in individual facilities, but weaving the ideas of TimeSlips into the infrastructure of daily life. To realize this transformation, Anne’s developing a model to train facilitators in partnership building with the aim of engaging residents, family, volunteers, staff, and administrators in meaningful creative engagement projects. According to Anne, “we are applying the work of cultural community development to the health sector, which sorely needs it.” The primary way this growing network of trained professionals gain support and inspiration will be though access to an online platform, one part curriculum and accreditation, and another part “creativity hub” and connection.

An important recourse that nursing home administrators will find on the online hub is monitoring and evaluation modules that not only help them deliver, learn from, and promote their new arts-­‐inspired and community-­‐building programming, but that link with the Minimum Data Set that all federally funded nursing homes must adhere to. Since many nursing homes are heavily reliant on Medicaid for their financing and regulations, Anne has used this as a leverage point by making TimeSlips extensively researched and Medicaid compliant, as well as proving with data that TimeSlips effectively moves the needle on several key metrics of patient care and health. These include the ability for patients with dementia to make themselves understood, as well as measurements of depression and mood. The presence of solid data and metrics makes it easier to incorporate an improvisational tool into the highly regulated world of the nursing home. Anne is also bringing these engagements into the world of home health care and services like Meals on Wheels, building them into the structure of how these institutions and programs work.

Anne is also building a new field, inspired in part by the existing field of arts education, where cultural institutions and schools are recognized as key partners, interconnected and building programming together. One of the goals of TimeSlips is to replicate that model of connectedness between cultural institutions (from museums, theaters, and arts non-­‐profits to universities and galleries) to nursing homes or other systems of elder care.

An example of this is the Flourish Fest Art Exhibit that takes place at nursing homes across Milwaukee, now in its 4th year. The gallery shows are the culmination of a year of work coordinated by a live-­‐in, college-­‐aged artist in residence who has hosted near daily art workshops and classes with the residents, facilitating their creative expression and artistic communication. Residents are central to this process, often involved in the process of interviewing and hiring the artist who will live with them for the year.

At the societal level, these efforts (and the media and academic interest they generate) are beginning to change the conversation. Anne is proving that people with dementia not only retain their creative capacities, but that they can nurture and develop them. Her work is to ultimately change people’s perceptions and fears of aging and disease.

In middle school, Anne struggled for three years without any friends. Her mother enrolled her in an intergenerational art class, where she began to appreciate art as a way to connect. (Later, in a 2014 TED talk, she realized that “my experiences in middle school are not so different than those of people in nursing homes.” Isolation contributes to the fact that teenagers and people in nursing homes are the fastest growing users of off-­‐ label anti-­‐psychotics.)

At 30, facilitating a program for elderly people with dementia, she spent six weeks trying to use movement and song to tap into memory, to no avail. Then, on a whim, she brought in a photo of the Marlboro man and a blank pad of paper. She asked the group, what is his name? Someone offered, “Fred”. A 45-­‐min story unfolded. There was singing, tears, and laughter. Staff gathered around, mouths agape. This imagination model worked for seven more weeks, but Anne asked, “Why is this model restricted to a one-­‐hour-­‐a-­‐week program? Why can't relationships just be this way, characterized by learning, engagement, and openness?" She needed research to make the case, so across a variety of formats and platforms—theater, memoir, narrative, collaborative public performance, and academic research—working tirelessly over the last 10+ years, Anne has developed an alternative concept of aging, one that focuses on its possibilities as well as its challenges and views sustained emotional connections as critical to our well-­‐being as we age.

Anne acknowledges that she has chosen a really unconventional path of working with older adults and committing her career to this. In 2017, when she was awarded a MacArthur “Genius” Grant, she noted that it gave her the courage and confidence to take her work to the next level, and self-­‐permission for “thinking the next thought, 10 times bigger.”