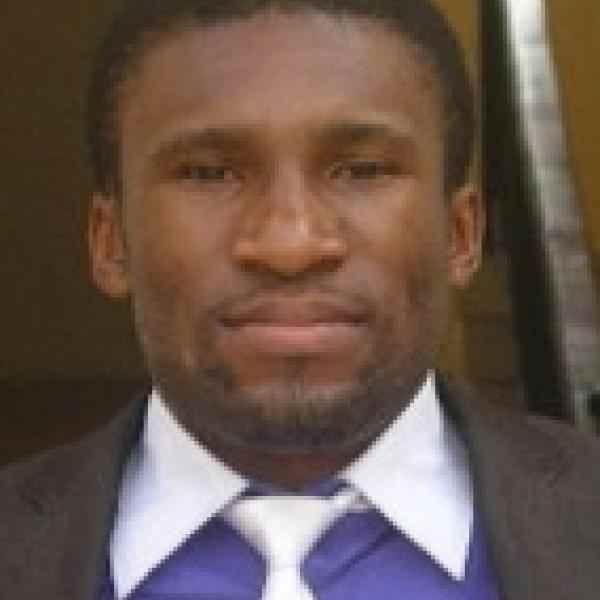 Kevin Ekwenwa is reducing the high startup costs associated with fish farming and providing group financing solutions and training to empower young people to be successful aquaculture entrepreneurs in Nigeria. Through this model, young people can create employment opportunities for themselves while meeting local consumption demand for fish through local production.

Kevin is empowering young people to become successful fish farmers in Nigeria. He envisions a dynamic and competitive aquaculture sector that produces enough fish to feed the local population while remaining an attractive and viable source of employment for young people. Despite Nigeria’s natural competitive advantage in fish production and the importance of fish as a protein source for Nigerians, the country only produces enough fish to meet a third of local demand. Kevin has designed a collapsible fishpond that can easily be set up in a backyard with access to a water supply. This fishpond eliminates 70 percent of the cost of a concrete pond. In addition, he has organized young farmers into groups in order to provide a feasible financing option for those who cannot afford the cost on their own.

Alongside this design innovation, Kevin’s organization works closely with communities to identify young people and marginalized groups to work with. He provides extensive training on modern fish farming methods as well as basic training on entrepreneurship and fish farm management. Kevin has formed partnerships with local government agencies to leverage existing extension services and facilities. Kevin’s comprehensive strategy recognizes the government’s initiatives to boost fish production and complements where they fall short.

Nigeria is a maritime state with a population of about 140 million people. Although blessed with vast natural resources and human capital, almost 24 percent of the population is not gainfully employed and about 84 percent lives on less than a dollar a day. Nine of Nigeria’s 36 states are situated along the Atlantic coastline and water bodies constitute 15.9 percent of Nigeria’s surface area. Thus, fish farming is an obvious option for many along the coast and even those further inland, given the relatively easy access to water and to fingerlings needed for breeding.

Nigeria produces only 0.78 million metric tons of fish a year. For many Nigerians, fish is an important source of protein in an otherwise limited diet. However, the shortfall in fish production has resulted in a low annual per capita consumption rate of 7.5 kg compared to the 13 kg recommended by the Food and Agriculture Organisation. Consequentially, malnutrition continues to plague the population. UNICEF estimates that 41 percent of Nigerian children suffer from stunted growth as a result of poor nutritional intake. Malnutrition jeopardizes child survival, growth and development that, in turn, slows down national progress.

At first glance, it is surprising that this sector continues to underproduce despite the availability of resources that make fishing a natural option for increasing national employment, income, and protein intake. Total national demand for fish is estimated at 2.66 million metric tons per year. Given current production, this leaves an annual demand-side gap of just under 1 million metric tons. Nigeria spends about $625 million importing fish that could be produced locally. The potential yield of Nigeria’s aquaculture resources is estimated at over 4 million metric tons of fish annually. Investments in this sector could help diversify the economy away from a focus on oil production. In addition, Nigeria has a natural competitive advantage in the production of catfish and tilapia—these low cost breeds are an affordable option for many and international demand for them is booming. Thus, Nigeria could easily meet its national demand and, in fact, become a fish-exporting country if adequate and effective policies were put in place to drive this increase in production.

In 2010, the federal Nigerian government recognized the importance of boosting aquaculture as a component of its overall agricultural strategy. In fact, in 2012, the government announced plans to create half a million new jobs in this sector. Nigerian states are also promoting aquaculture at a local government level. However, government programs are targeted at incentivizing investments in large-scale private fisheries or focused on creating demonstration farms and extension services to train prospective small-scale fish farmers. Although these are important components within a larger aquaculture strategy, these programs do not cater to young entrepreneurs looking to start at a smaller and more localized scale. More importantly, these programs do not recognize and remove some of the significant barriers to entry in this market.

Fish farming involves considerable upfront costs to build the land and ponds and buy fingerlings needed to begin. In addition, fish require large quantities of expensive fish feed to grow to a healthy size and sufficient quality standard. High startup costs present a significant challenge to many. Kevin notes that even when young entrepreneurs have the required training to develop and manage local fish farms only 5 out of every 100 will eventually start their own fish farms due to the high startup cost of building fishponds. Pond construction alone—the largest unavoidable fixed cost—comes in at just over 1 million Naira (US$6,500). This amount can easily rise to over 3 million Naira (US$19,500) depending on materials and labor costs in a particular location. This is an unaffordable cost for many Nigerians, especially when one considers that Nigerian GDP per capita is only $2,700 a year. Thus, it is vital to reduce the costs associated with fishery startups to truly catalyze an increase in aquaculture employment and national fish production.

Kevin envisions a time when the regional production of fish yields enough to meet local consumption. In 2009, Kevin began this work by promoting fish farming to young people and training them on modern methods. He engaged communities through meetings with community leaders, youth, women’s organizations, and developed training curricula on the basics of fish farming, hygienic practices, and the use of organic feeds and products used in fish farming production. Kevin designed a collapsible fish pond that costs 70 percent less than the concrete ponds and eliminates the cost of purchasing or leasing land because it can be set up in a backyard or land with access to a water supply. The collapsible fish pond combines the shear strength, toughness and impermeability of a tarpaulin polymer with the tensile strength and corrosion resistance of stainless steel, to form the intricate design of a low-cost and portable pond. Kevin has also designed a financing solution for farmers who cannot afford the costs on their own. These farmer’s form groups and their combined resources are pooled to cover the down payment for the first fish pond. Then, they purchase fingerlings and operate the pond together. They complete payment on the fish pond with the profits from their yields.

Kevin promotes fish farming as a viable employment opportunity that can bring in an income and feed a family. He provides extensive training to the fish farmers who join and continues to devise new methods for increasing their return. For example, Kevin is demonstrating how fish farmers can participate in the government’s strategy relating to integrated crop and fish farming by training young new fish farmers to use the leftover fish pond water as organic fertilizer for their vegetable farms. In this way, Kevin encourages both fish and crop farming, which diversifies farmers’ profits. Farmers could also sell this water to others as fertilizer. Kevin has also responded to the notion that Nigerian fisheries sell raw products without capitalizing on the gains that could be found higher in the value chain. He has incorporated value addition into his training program to teach farmers how to produce and market their fish in different ways (fresh, dried and canned). With the recent government attention to fish farming, Kevin has created partnerships with local government agencies to capitalize on their training facilities and programs. In this manner, he has built his strategy around the areas where the government’s interventions fall short—reducing the costs of access by decreasing the cost of the pond, designing group financing methods, and providing specialized training on how to maximize the returns on fish farming by recycling waste products and adding value to raw fish.

Kevin began this work in 2009 and by late 2010 had trained about 3,000 young people and existing farmers on the techniques of modern fish farming. By the end of 2012, Kevin was working in 15 different communities and had organized just over 100 groups of fish farmers using the collapsible fish ponds.

At this point, Kevin is working in two states and is spreading south into the Niger Delta region, which has fisheries that were particularly hard hit when oil production boomed and oil spillages and pollution began infiltrating their water sources. Kevin is excited to reach beyond state boarders in his quest to make fish protein available and affordable especially for the rural poor.

In the next year, Kevin plans to standardize his product, build capacity for production and establish his training program through farmers’ associations, youth groups, online, trade fairs, women’s organizations, and community leaders. Within three years, he projects the creation of over 1,000 employment opportunities (direct and indirect) and a collective savings of about $662,408 on frozen fish importation. Kevin wants to secure 20 percent of the market and close the supply gap of fish in Nigeria by 40 percent.

Kevin’s humble family made their living in the fish business and he always wondered about the high price of fish. He helped his mother (a fish seller) carry her products to the market and learned much about the fish industry in Nigeria from her.

Kevin developed a habit of problem-solving through entrepreneurship, a characteristic that has remained with him ever since. At university he started ECO DRIVE, a club formed from the need to keep a clean and healthy environment for students. The club involved stakeholders within and outside the school and they succeeded in recycling the school’s trash.

While Kevin was a student, he went to the market to buy fish but could not afford it. This prompted him to explore how to make fish more accessible to the poor. In his search for solutions, Kevin joined SIFE an entrepreneurial action organization where he met like-minded young people. He acted on his entrepreneurial impulse and began theoretical and practical courses on fish farming. Kevin wanted to share this knowledge with others. Upon completing his university studies he began training and empowering 70 young people on practical fish farming and watched their lives transform. This was his “eureka moment” as an entrepreneur. As a result of this and other similar entrepreneurial feats, Kevin and nine members of his SIFE team were selected to represent Nigeria at the prestigious SIFE world business contest in Los Angeles, California, US (2010). Kevin and his team also emerged as regional finalists in the 2012 Global Social Venture Competition (Asia-Africa) at the Indian School of Business, Hyderabad (2012), where they placed among the top six finalists. He was a finalist in the MTN Budding Entrepreneur Business Grant competition and at the INDIAFRICA Business Venture Competition (Sept. 2012). Kevin recently won a YouWiN! Award, a competition of the Nigerian government to reward and incentivize young entrepreneurs with innovative ideas.