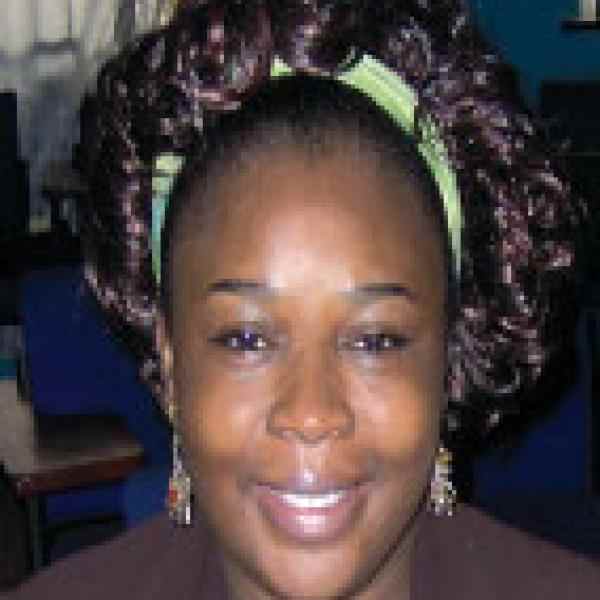 Lucy Kanu has designed a process for economic empowerment that prioritizes local aspirations, introduces outside resources without fostering dependence, and is replicable across sub-Saharan Africa. The success of her organization, Idea Builders, and her model to turn local ideas into powerful engines for development will mean a shift in the field to favor local ownership and strategies that build on success.

Lucy is leading a new approach to community development which takes into account the full process of empowerment. By maximizing local ideas and capacity, creatively engaging partners, and ensuring replication, she is able to overcome the same challenges faced by other efforts in the region: Becoming sustainable and scalable. In Nigeria’s challenging and often corrupt environment, many development projects fail to establish sustainable impact; those that do take root in a single place often fall apart after a few years and do not expand. Lucy knows that the aspirations and strengths of the community need to be the starting point and has designed a process that builds on local ownership. The result is not just an autonomous economic development “program” that is transferable, but empowerment and skills development that strengthens communities in the long-term.
Lucy uses a chain of strategies to prepare communities to utilize new resources and increase their earnings without breeding dependence. In her pilot project, for example, Lucy worked with a cassava-producing community to utilize improved varieties of staples from the International Institute of Tropical Agriculture (IITA), National Root Crops Research Institute–Umudike (NRCRI) and the State Agriculture Development Agency. With their surplus output, Lucy and the farmers started a milling operation and began to produce/process and market cassava flour. Realizing the potential of working up the value chain, the village women then organized peer-led baking classes and revamped an abandoned bakery that serves the immediate community, neighboring markets, as well as wholesale markets. The producers now run a cooperative with limited support from Lucy’s organization and are training other communities to replicate this approach with other commodities.
Conscious that the spread of this approach cannot rely on her alone, Lucy addresses the issue of replication in three ways. In each project, she partners with Youth Service Corps volunteers to place them as ongoing accountability partners who can also document and analyze results. Regionally, participants such as the women from the cassava pilot are trained to travel and teach the approach to other communities—and to charge appropriately for their knowledge. Nationally, Lucy has built a representative advisory board which guides replication in each of Nigeria’s thirty-six states.

More than half of Nigeria’s estimated 135 million citizens live in poverty. Despite recent trends towards urbanization, at least half the population of Nigeria still lives in rural villages. Even in Nigeria’s wealthiest region, the Niger Delta, residents live in extreme poverty as the bulk of the revenues from its oil and natural gas either leave the country or are lost to corruption.
Existing efforts to address the poverty in the Niger Delta and elsewhere in Nigeria, particularly those focused on community development, either fails outright or is unable to take an isolated success and expand it. In some cases, donor agencies are unable to work outside their pre-determined agendas. In others, the basic flaw is delivery: initiatives and ideas are dropped into a community, often from the top-down, without thoughtful or context-driven implementation. Corruption plagues citizen organizations (COs) just as much as government initiatives and private companies and creates an atmosphere of little trust.
Outside organizations may implement strong capacity building or other development projects, but only to the point where communities remain dependent on that organization. These “briefcase COs” do not empower communities so that they are truly able to continue on their own. In Nigeria this is particularly the case for programs aimed at women. Microcredit and other schemes are dispensed without adequate consideration of the women’s psychosocial condition and self-esteem, which are necessary in determining their ability to succeed. In cases where cooperatives are formed, inadequate attention is given to long-term sustainability and transparency, with the result that cooperatives end up crippled by their own poor governance.
In the area of agriculture, too many community development approaches neglect to seek out better technology or improved crop varieties. The technologies and process innovations exist, but communities lack connections to source them. The proprietors of these technologies do not tend to reach out to communities or encourage dissemination in poor areas. Nigeria is a country well-endowed with research institutions and capacity, but there are limited mechanisms for mutually beneficial knowledge transfer.
There are initiatives that do well but do not thrive once initial success has been achieved. They do not breed follow-on initiatives nor spread to other communities. There are no processes put in place to capture the gains of these initial achievements, no attempt to change the value chain of production of a finished product, and no efforts to distill strategies to a point where they can be applied in other contexts.

Early in her career Lucy realized that the only development efforts that were truly successful took into account the needs and priorities of its stakeholders and set it on a self-propelled path towards empowerment and out of poverty. Lucy chose a community in eastern Nigeria—close to the Delta where she had learned the ropes of development—to dedicate two years to a pilot from which the principles and strategies of her organization, Idea Builders, would emerge. In 2007, Idea Builders had completely transformed the pilot village and has been replicated in over twenty communities representing hundreds of producers.
Believing that women would best anchor the initiative and the economic growth of the community, Lucy began with informal gatherings of women. Their discussions helped her map community needs, set priorities, and determine local capacity. This included addressing the psychosocial issues that often impede women from gaining economic clout. Lucy cares deeply about ensuring that the women are motivated and feel comfortable taking on new roles and working with new technologies.
After working to identify local capacity, such as production of cassava and maize or raising livestock, Lucy connects organized groups of producers to an innovation that adds value to their idea. These range from new processes to improved crop varieties—anything that allows producers to markedly improve their output and earning ability. In the pilot, strategic partnerships with agric-focused agencies granted access to new and improved varieties of cassava and maize transformed local production under the women’s leadership and provided IITA &amp; NRCRI with an opportunity to use their research to participate in development. Additionally, nearby cassava producers got involved and Lucy has since engaged over 2,000 women through 300 Workshop/Talkshop sessions.
Once fully organized, most producer groups coalesce into cooperatives and Lucy’s organization trains them in transparency and accountability to avoid the crippling mistakes common to cooperatives in the region. With newfound confidence and autonomy, these groups then grow from just production to handling processing, marketing, and sales of finished products. This emphasis on sound management in the development stage of cooperatives ensures that none of the gains from increased production are wasted and that the economic opportunities of the entire value chain—up through the packaging and sales—are locally owned.
To fill the cassava planting harvesting gap, Idea Builders embarked on a pig-raising project in a nearby community and has proven that the model is transferable to other groups with other products. In that case, the local College of Education played the role of external partner with support and resources in exchange for collaborative use of the piggery for practicals and demonstration classrooms. The pigs are raised by cooperative members with the agreement that a certain percent of each new litter is passed on to new members to grow the initiative. The sale of meat products sustains the project.
While the pig program is an example of organic spread of the model, Lucy has also trained the women from the pilot community to guide replication in the southeastern region. These women charge a fee for their training, 20 percent of which they keep and eighty percent going to their cooperative. The trainers have already successfully worked with a group of men cultivating improved maize, also sourced from the IITA partnership.  All projects are held to ethical and managerial standards, supported by local and international volunteers sourced through the Nigerian Youth Corps Service (NYSC) scheme or Volunteer Services Overseas, U.K. and Nigeria. Idea Builders makes creative use of volunteer groups to remain connected to communities without fostering dependence. As the volunteers also assist to broaden support for her approach, Lucy’s complementary efforts to improve corporate citizenship in Nigeria gives her access to corporations and pro bono support for Idea Builders. Lucy leverages her extensive personal network from years of work in the field to strengthen her overall vision of stronger, more engaged communities.
To help spread her ideas in the states to the north and west of the Delta, Lucy has formed a national advisory board for Idea Builders, which comprises representatives from all thirty-six states. Each advisory board member is a champion for the model in their state and helps to guide implementation/funding. The initial recruitment for the advisory board received an overwhelming response, and Lucy subsequently capped each term at one year, with a two-year wait list for some positions.
Lucy’s process is flexible and adaptable; each aspect can be spread on its own to other interested communities, such as strategies for encouraging cooperative transparency. In the end, it is the combination of these strategies which achieves new levels of impact and fosters long-term economic autonomy where other efforts have failed.

Lucy’s father set a firm example in her family, scrupulously fulfilling his government job duties in the face of unabashed corruption. Inspired by his high standards, Lucy sought to balance her desire to care for her family financially and her interest in development. During her post-secondary year of service (required in Nigeria), Lucy distinguished herself as a NYSC member in Shell Nigeria, and rapidly climbed the ranks, to join Shell’s workforce. Working in Shell Nigeria Exploration and Production Company exposed her to communities and the need for community outreach programs in the Niger Delta. Since leaving Shell for full-time nonprofit engagement, Lucy has gained a reputation over the years for her fearless trips into volatile regions and her ability to create programs that have attempted to soothe relations between oil companies, including ExxonMobil and Chevron Texaco.
After earning a degree in management, Lucy joined the team of the Growing Business Foundation (GBF). While at GBF she redesigned their microfinance program to improve its sustainability and effectiveness and launched GBF’s partnership with a leading mobile provider, MTN. The project put cell phones into the hands of rural women; enabling them to became small business operators. It now operates in six geo-political areas of Nigeria and was recognized at the Development Showcase of the World Summit for Sustainable Development in Johannesburg (2002). Based on the success of the phone program, Lucy stepped out on her own and launched Idea Builders to turn local ideas for development into powerful, transferable models.
In 2008, Lucy was selected to participate in the Fortune/DOS Women Mentoring &amp; Leadership Program in the U.S. She returned to Nigeria to initiate a mentorship program in Idea Builders targeting young women between the ages of eighteen and thirty-eight. Women Mentoring Women is an addition to Idea Builders empowerment program, and serves to expand its reach to all women.