Ashoka Fellows like Basil Kransdorff are introducing new products and services that are more affordable, accessible, and valuable to people around the world. Through the more than 120 million sales of e’Pap in 15 countries, Basil Kransdorff is helping people who suffer from chronic illnesses and malnutrition live longer, healthier lives. 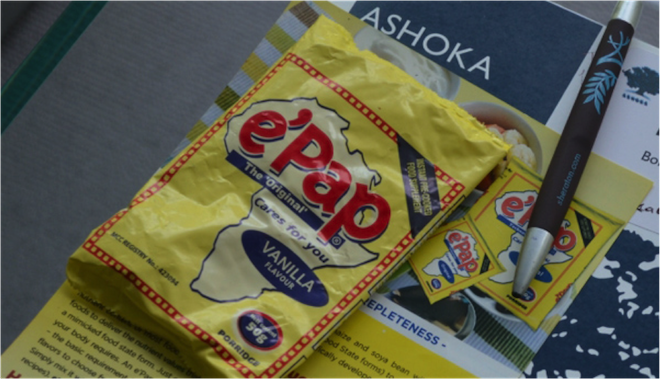 Many people across the world cannot afford a healthy diet. Traditionally affordable food options, even those that are labeled “fortified” by the manufacturer, do not necessarily contain sufficient nutritional elements to help achieve and maintain wellbeing. Moreover, fortified foods are often not bioavailable, meaning that the nutrients in the food are, for the most part, inaccessible as they cannot be absorbed into the blood stream.  For people already battling illness, eating foods deficient in accessible nutrition has an even more deleterious effect. Ashoka Fellow Basil Kransdorff saw how much greater the effects of diseases are on the poor who lack nutritious foods while working with a hospital near Johannesburg, South Africa. Basil created a new product, e’Pap, in response.

Basil observed that even when claiming to be fortified, the food items available to poor HIV patients weren’t providing the necessary nutrition to fight everyday infections, let alone to ward of more serious diseases such as the opportunistic tuberculosis (TB) infection or malaria. As a result, even with the same access to medicine as higher income patients, poorer patients with HIV suffered from weakened immunological defense due to a lack of critical nutrients. The medical community, equipped to address acute medical problems and diseases, is unable to adequately address the severe nutritional deficiencies found in patients with chronic illness.

In 2001, Basil Kransdorff developed e’Pap in order to enable access to high quality nutrition for over six million South Africans living with HIV/AIDS. e’Pap is a ready-to-eat, fortified porridge that offers twenty eight nutrients for only $0.16 per portion. e’Pap is prepared by simply adding water, milk or yogurt to the dry porridge powder- and yet it offers more than twenty nine times the accessible nutritional value of traditional maize porridge. In contrast to existing fortified food supplements, e’Pap contains the appropriate micronutrients in a bioavailable form that ensures effective absorption – that is, the nutrients in the food actually make it into the bloodstream. e’Pap is a meal supplement, in that it is not meant to entirely replace traditional food sources, but rather can be used to significantly increase the nutrient and caloric content of a meal. This new product has dramatically increased the health outcomes for even the sickest patients – those that lived with both TB and HIV. HIV/TB patients who regularly consume e’Pap have a 39% higher TB cure rate and 75% lower chance of TB recurrence.

Basil recognizes that the essential value of food is about more than hunger satiation or energy kilocalories; it’s about nutrients that the body can actually put to use. A major challenge that many low income communities face is that their over-processed food, the food which is economically available to them, meets caloric intake standards but has been stripped of its nutritional value. Kransdorff argues that a meal replacement food item – or really, anything that we want to call “food”– must deliver a vital array of nutrients to provide measurable sustenance. Through his organization, Econocom, Basil is working to redefine the standards for ready-to-eat foods by measuring the bioavailability of the nutrients, rather than simply what nutrients the food contains. Today, Econocom sells and distributes over two million portions of e’Pap per month in 15 African countries, with plans to expand to India, the UK, and the U.S in the near future.

Like Basil, many social entrepreneurs are introducing new products and services that are more affordable, accessible, and valuable to people around the world. Such products are visibly increasing the quality of life for millions of people worldwide and are redefining how we think about food and nutrition, healthcare, economic transactions and value, among other basic elements of every-day life.