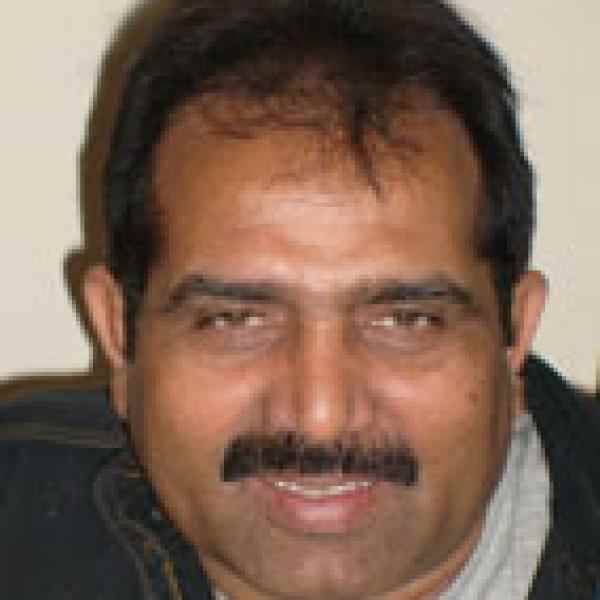 There are over 10 million gypsies living in Pakistan that face deep prejudice, hostility, and exploitation. Nazir Ghazi and his organization, Godh (meaning ‘lap of the mother’ in Urdu), provide education, health services, and job opportunities to the growing number of gypsy communities in urban Pakistan. Nazir also encourages gypsies to participate in street theater productions and public outreach to help educate mainstream society about their culture and promote tolerance. Driven since childhood to work for the oppressed, Nazir is now expanding his work beyond Lahore to reach gypsy populations across Pakistan.

Nazir is helping Pakistan’s gypsy population integrate into urban life by reducing prejudice against gypsies and by empowering gypsy communities to access better housing, education, health care, and jobs. Nazir sees his work as part of a larger effort to promote tolerance and peaceful coexistence among the many cultural and religious groups living in Pakistan.

Nazir is paving the way for enhanced citizens’ rights for gypsies and other historically marginalized groups. He is demonstrating to the government and society how challenges of service delivery can be overcome through community-based development activities, provided that their basic citizen and housing rights are recognized and provided for.

Nazir organizes gypsies to merge into urban life without changing their way of life or identities, and provides them with tools and education to cope with life in a new context. Through his organization Godh, Nazir has developed a package of services that include education for children and their families, basic health care, and training of community leaders—especially women—in job skills and citizen organizing. All the services are delivered through a social mobilization unit that first gains trust of the community and helps them link up with other stakeholders.

At the same time, Nazir is involved in research and advocacy to help gypsies acquire land and services especially with the Municipal government. Nazir uses theater groups, posters, and gypsies’ participation in local festivals and city events as methods to expose the society to the virtues and talents of the gypsy community. Godh also organizes seminars and conferences and has made a documentary on gypsy life to break the myth of gypsies as criminals and immoral people.

Nazir founded Godh to organize gypsies at the periphery of Lahore, a city where the majority of gypsy groups come to during their travel, and where an increasing number of gypsies have taken up permanent residence. Through this initial hub, Godh is reaching out to other gypsies as well in the province while building understanding and cooperation between gypsies and the rest of society so that rights can be ensured and peaceful coexistence can be a reality.

Gypsies across the world live a nomadic life. They have lived this way peacefully for centuries in Pakistan, but urban expansion and increasing intolerance is threatening their way of life and further marginalizing them as they struggle to integrate. Many once nomadic tribes are forced to settle down for employment’s sake. However, such transitions are difficult, and this already marginalized group is not getting any help. The city does not provide them with land to camp on and they have no access to basic infrastructure and services. The few landlords willing to give gypsies land to camp on often exploit them—everything from forced child labor to pressuring them into carrying out criminal activities. Others are reluctant to employ gypsies even as craftsmen or day labor because of mistrust. Much of this treatment is a result of deep societal prejudice. But the government and civil society have done little to counter such perceptions—if anything, they are part of the problem. Gypsy children receive no education and gypsy families receive no health care. Gypsies are not recognized as citizens: They have no national identity cards, they cannot vote, and their calls for equal treatment and rights protection are met with suspicion.

There are an estimated 500,000 gypsies or more in Lahore alone, and many more throughout Punjab. As an increasing number settle down in cities and surrounding urban slums, they must delicately balance their traditional ways of life with the pressures of integration and urban life. Gypsy children are especially vulnerable. For example, girls from singing and dancing groups are drawn into prostitution, either with promises of high pay, or with threats of violence. Mothers and children who used to beg on the streets are exploited by organized begging groups run by the mafia. And as gypsies acquire a permanent niche in the urban networks and stop migrating for work, they must find permanent residence somewhere. Municipalities continuously evict them from public land, forcing them onto private lands whose landlords take advantage of their lack of citizenship and exploit them through forced labor.

As the situation worsens, the blatant mistreatment of a whole subset of society has become increasingly obvious. Equally obvious is the lack of serious efforts by government or civil society to protect the rights of gypsies and enable them to integrate as full citizens into Pakistani society.

As the world fights to ensure the rights of the most vulnerable and marginalized people, Nazir recognized that nobody was fighting for gypsies in Pakistan. His determination to do something led him to set up an informal school for gypsy children where he taught in the evenings. The school was designed to prepare gypsy children for the formal Pakistani schools, and to help them adjust to life in an urbanized modern environment. Soon his school became more than a school: interest from parents and others transformed it into the first community center where the gypsies organized gatherings.

The centre became a community organization that Nazir called Godh, the first organization in Pakistan managed by gypsies for gypsies. The organization’s first mission is simple: help counter negative stereotypes of gypsy people. Godh does so in many ways, but the most successful has been a traveling Puppet Theatre that teaches gypsy history and culture, and helps show how much gypsies share in common with others. The theatre quickly had a tangible effect on the gypsy community: Complaints from neighbors and municipality inaction were replaced by a government agreement that provides public land for settling gypsy communities, or that brokers a deal with landowners to allow gypsies to live on their land for a small rental and until the land is developed. Nazir continues to lobby for greater government action to facilitate gypsy integration in the massive trend towards urban migration.

Godh has stayed close to its early roots as a children’s school and continues to provide education services for children and adults alike. Trained health professionals also volunteer to provide health education and basic health services. Finally, Godh has evolved into a skills training centre for gypsy women. Nazir sees this as a critical element for the ultimate health of the gypsy community. Participating women have improved their skills and found better employment, and have even been able to reduce domestic violence.

Godh was initially registered as a Trust but was re registered under the Societies Act to give it more freedom in carrying out projects. It has a staff of 22 members including teachers and health workers in nine communities and an annual budget of Rs.1.8 million per year from Misserio till 2010. In 2000, through Godh Nazir mobilized donor funding expand from one gypsy community to four.

To begin reaching the more than 10 million gypsies in Pakistan, Nazir has developed a mobile education and theatre unit and is organizing an annual gypsy day where gypsies from across Pakistan would be invited to come and celebrate. Here he plans to introduce them a modernization plan with specific projects for children, and women, and better employment and housing opportunities.

Nazir became socially active early in his life. While in the eight grade, as a member of the Boy Scouts, he organized a community group and then went on to form a local committee to improve and regulate traffic in his area. Nazir later organized a group of young students in his community to carry out a variety of community service and improvement projects. His turning point in life came when he participated in a global march against child labor where he met with people from across the world in a true spirit of universality. He was awarded the Best Core Marcher award in that walk that went from India to Finland across the continents. Most importantly, the walk inspired him to think about what he could do upon returning to Pakistan to reduce rights abuses.