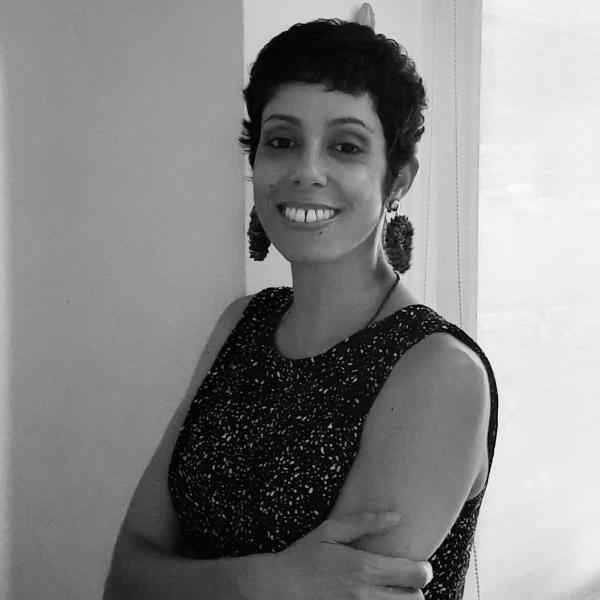 Gender inequalities are being reinforced in Brazil by the lack of information, discussion and proper press coverage, as well as rampant misinformation. Giulliana co-founded the first organization in Brazil to change the debate and narratives about gender using data transformed into simple and creative narratives attractive to a diverse audience. Besides opening space for more thoughtful discussion in society engaging public, private, and social sectors, she is creating a network of partners who are doing original research where relevant data is not always available.

Identifying these obstacles, Giulliana co-founded Gender and Number (Gn) in 2016 to foster the use of data on women, black women and LGBTQIA+ issues transformed into creative, simple, and powerful visualizations by a growing movement of journalists, media outlets, public officials, business leaders and civil society organizations committed to making progress in social justice. Based on impactful and consistent information, content is distributed through a variety of forms using accessible language that enabled the content to be widely reproduced and serve as a reference for the formulation and proposals of gender rights national bills. As the information is fact-based, today Gn production crosses boundaries and connects with a wide range of audiences, varying from conservative newspapers to grassroots networks.

To unlock the social transformative power of the business sector, Giulliana recently launched a tool for managers and leaders, The Gn Hub, that generates diagnostics and reports on gender and race scenarios to assist in staff training and deepen compliance policies toward diversity. In search of changes in the field, Giulliana has been contributing to the training of journalists, participating in courses promoted by civil society organizations or universities, receiving and hiring young journalists in Gender and Number and maintaining an open dialogue channel with other media organizations and digital natives, such as ABRAJI (Brazilian Association of Investigative Journalism) and AJOR (Digital Journalism Association). In the future, Giulliana seeks to work more systematically with Latin American media organizations across the continent, to expand the scope of reporting as well as Latin America relevant data visualizations, such as violence against women and female representation in politics.

The 2018 Brazilian elections were accompanied by an increase of hate attacks against LGBTQIA+ people, a phenomenon that was legitimized by the election of the current president, Jair Bolsonaro. The research done as part of the Sacred Kingdom of Disinformation Project, brings evidences that the hate discourse, also directed against women and black people, is supported by some religious institutions that propelled it into politics. These hateful views have severe consequences: the Transgender Europe World Report shows that out of all transgender murders recorded in 71 countries in 2016 and 2017, a total of 52% took place in Brazil.

The challenges faced by these groups in Brazil, however, are not well documented and lack of transparency is undermining the implementation of solutions. Official LGBTQIA+ data has never been collected by government institutions. Recently, the federal government reduced the budget of the Brazilian Institute of Geography and Statistics (IBGE, the main research body in the country) so low that it would not be able to carry out a demographic census, normally implemented every 10 years. Although the decision was reversed by the Supreme Court after popular pressure, it is still unclear how much the census will have to be scaled back in order to fit the reduced budget in 2022.

To worsen the scenario, Brazil dropped four positions in the press freedom ranking. According to the organization Reporters Without Borders, Brazil is now ranked 111th and joined the ‘red zone’ for the first time in 20 years. Without credible and accessible information, legislators cannot propose new bills that are reasonable for their constituents. Citizen sector organizations, meanwhile, are not able to engage society and justify their initiatives and business leaders do not have evidence to overcome race and gender bottlenecks.

Despite the number of communication channels and tools, new technologies can easily reinforce prejudices, because they spread information that reinforces perceptions, values, and attitudes, making it difficult to access diversified coverage that expands people's worldview. This blend of fragile data coverage on issues faced by women, LGBTQIA+ and black people, attacks against a free press, and difficulty disseminating information between groups that think differently makes it even more relevant to gather independent data, increase citizen sector mobilization capacity, and improve the work of public decision-makers.

To improve social justice for women and LGBTQIA+ communities in Brazil, Giulliana disseminates relevant data transformed into creative narratives capable of communicating several levels of meanings with consistency through visual stories, interactive infographics and technology. By changing the way data is presented and made available, Gender & Number (Gn, the organization founded by Giulliana in 2016) manages to expand the reach of the data, informing and interacting with a diverse audience. Giulliana uses transparency to build networks of trust with legislators, the press, and citizen sector institutions capable of making progress in gender issues. Content is shared via digital platforms with accessible language, always under an open license to be reproduced widely, and provides content access to 40,000 to 90,000 users each month.

With the press as an ally, Gn has increased the quality of coverage on gender and racial issues. The content now reaches a wider audience, and Gn stays in constant dialogue with journalists, networks and civic organizations dealing with the democratization of communication. It also builds partnerships to produce data when there is no data available, and by implementing these strategies, Giulliana is opening space to make visible issues that no one had noticed or accurately quantified before.

Knowing that legislators need to have accurate and credible information to formulate bills and justify themselves to their constituents, and that women are unrepresented in Brazilian politics, one key element of Giulliana’s strategy is to influence policymaking. Gn holds events such as the 'Gender & Numbers Dialogue' which feature panels composed of parliamentarians, journalists, and researchers to encourage dialogue and solutions. After events, Gn builds on these relationships by providing daily content to former participants through interviews with public managers committed to a social justice agenda, presenting relevant studies and data visualizations, and sending data connected to urgent situations to all members of Congress. Monica Benício, widow of murdered councilwoman Marielle Franco, for example, is now a politician and constantly uses Gn statistics, multivariate analysis, and forecasting to elaborate bills that promote gender rights. She recently proposed and passed legislation to create "Lesbian Visibility Day," citing Gn's research as a critical tool.

In collaboration with civil society organizations, Gn strengthens their capacity to show relevant issues and engage communities. Unprecedented information about the Covid-19 pandemic and its impact on the lives of women, black people and LGBTQIA+ communities was collected by Gn with the participation of DataLabe of Redes da Maré (an Ashoka Fellow institution). The information gathered was used in more than 50 publications and was used to alert authorities, mobilize the general population and guide public policies to mitigate the negative effects of the pandemic on vulnerable populations. To promote changes in the private sector, Gn recently launched the The GN Hub: a tool that brings all of Gn’s expertise to support staff training and compliance that improves companies’ policies towards diversity generating internal gender and race diagnoses and reports.

The capacity to deal with a diverse series of actors, and the acquired credibility from those interactions, has enabled Giulliana to tackle sensitive issues such as religious influence in gender hate attacks and misinformation, and to dialogue with people who are not used to speaking about gender and racial subjects. In 2019, Gn launched the Sacred Kingdom of Disinformation Project, which combines applied research and network analysis to explain the phenomenon of gender ideology in Brazil, taking into account the connections between media, church and politics over the last 30 years in the country. The project allowed influencers to address this delicate issue in a grounded and compelling way, enhancing the coverage quality with more than 500 journalistic reports. Gn has also held events based on the project, for example, for high military ranks with the presentation of gender data enabling this audience to approach the subject from a different perspective.

In 2022, Gn will provide gender-lensed political coverage that provides information on female underrepresentation in politics in order to make the problem visible to society and civic leadership. With a long-term vision, one of Giulliana's strategies is the training of journalism students. For her, it is essential to work with new paradigms and approaches from an early age. She currently has partnerships with universities and also implement courses on gender and technology with the Institute of Technology and Society, a think tank focused on technology and copyrights. Another future perspective is to work in collaboration with Latin American actors to expand the scope of reporting as well as common themes.

Giulliana's older brother was diagnosed with autism at an early age, a diagnosis that was not commonly made and understood in the community where she and her brother grew up. His mother dedicated her life to raise Giulliana's brother with respect and integrated him into the community. As a result, Giulliana always embraced diversity as part of her life under the care of women in the family who taught her that she could do and be whatever she wanted. Her formal education took place at a school founded by a group of teachers led by Paulo Freire, who advocated for education to be used to develop "critical and humanized" thinkers. This educational environment was instrumental in forming Giulliana's first experiences, including being elected as the student representative leader.

It was in these spaces that she rooted her values and started to promote social initiatives. Giulliana understood that it would not be possible to build social justice without diverse voices and local action. She chose journalism to "make unknown stories known", opening spaces for society to visualize all groups of people with their challenges and their potentialities and promoting healthy interaction. At Diário de Pernambuco, she had her first practical training with the only editor-in-chief of sports in the Northeast that stimulated her professional growth. She worked as a communication consultant in organizations focused on private social investment, such as Instituto Claro Institute and Telefonica Foundation. It was with Priscilla Gonsales (an Ashoka Fellow) that Giulliana learned more about the power of an entrepreneur using technology to promote education. Through Educadigital, Priscilla was transforming education by revitalizing existing pedagogical resources to promote reflection and not only consumption of content. Giulliana became more interested in the third sector and contributed to the initiative of creating content at the intersection of education and technology.

In 2014, she wanted to explore the potential of using data and technology to promote civic engagement and began researching international experiences related to public account transparencies and collaborative processes. Giulliana saw that the potential was real and on a trip to London had the opportunity to take a quick course in The Guardian on data visualization. Inspired to develop the idea that would become Gender and Number, Giulliana returned to Brazil. Always able to congregate partners, she co-founded Gn in 2016. Since then, she has dedicated to strengthening the institution with organizational management that prioritizes human capital and is guided by diversity and the understanding that journalism needs to be plural in all its stages.