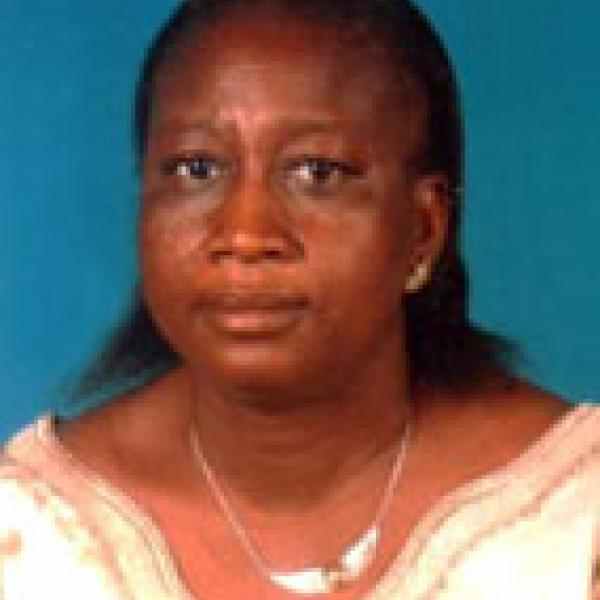 Kardiatou Kabore founded the Association of Women Foresters of Burkina (AMIFOB), a citizen association of professional women foresters with the aim of protecting the biodiversity of trees, reducing desertification, and helping struggling women maximize the environmental and economic value of their vegetable gardens.

An experienced professional in the field of forestry, Kardiatou has long been concerned with the hundreds of tree species being threatened by encroaching desertification and the felling of wood for fuel, a very common practice among women. She is also troubled by the lack of diversity in local food choices in urban and peri-urban areas in Burkina Faso, which coupled with rapidly rising food prices, is leading to a dangerous situation. Kardiatou saw the solution to these problems in linking biodiversity work with an economic stimulus initiative. By combining vegetable gardens with wild tree nurseries, she helps improve the natural environment of urban and peri-urban village areas while also providing the resources necessary to ensure better health and nutrition for women and their children, especially those living below the poverty line. The sale of leaves, for food and medical purposes, and fruit from these trees can be worth several times the value of vegetables occupying the same amount of soil and water. Addtionally, selling small trees for reforestation also represents a great source of revenue. In the last five years, her Association of Women Foresters in Burkina has started a new trend of introducing forest species into gardens. In Burkina Faso, women’s associations with vegetable gardens now have more than two hundred species of trees and bushes. Her plan is to reach out to women’s organizations in different countries in the Sahel and broaden her tree nursery campaign to cover as many as four hundred different species.

Burkina Faso is currently in a state of serious environmental degradation, characterized by the massive destruction of vegetation cover, the accelerated degradation of soil fertility, and the destruction of ecosystems and biological diversity.Governments and citizen organizations alike have begun fighting the advance of deserts in the Sahel with tree planting campaigns. However, such campaigns have not been very successful because they tend to follow a similar pattern: trees are planted, there is a short, intense period of rain, grass grows around the saplings, and then the saplings die from lack of tending and proper weeding during the dry season, when competition by plant species for scarce soil nutrients is at its highest. In Burkina Faso, such lack of tending and follow-up has been an especially big problem.Because of the advancing desert, food prices have risen dramatically. In the last five years, the price of basic food items such as rice, oil, milk, and sugar have at least doubled in most Sahelian countries. In Burkina Faso’s capital of Ouagadougou, the former site of West Africa’s largest food market, the price of meat has risen by more than 50 percent in the last three years, causing families to reconsider their food options. People living in peri-urban areas, on what has been deemed to be “barren” land, are perhaps the most at risk in the face of desertification. Poorer, and without access to vegetable gardens, the women in these areas gain their meager livelihoods through activities such as gathering stones for re-sale. The introduction of tree nurseries is particularly helpful in stabilizing the soil in these areas.

Kardiatou started her work with women who had basic gardening and crop cultivating knowledge, and small amounts land. After organizing them into small groups, she led short training sessions highlighting the economic and environmental benefits of her methods. She then arranged annual follow-ups, led by active or retired professional foresters interested in biodiversity and conservation. These foresters became members of AMIFOB as they came out of rural development school and were eager to show other women how to plant and cultivate trees and run small-scale nurseries. Once Kardiatou proved that an integrated garden containing both vegetables and trees could work in the barren, peri-urban area of Ouagadougou, it became clear that these gardens could also provide food and a stable source of income for the sixty women who had previously been stone-gatherers. The publicity around this success helped her launch a campaign to transform vegetable gardens throughout Ouagadougou, with the members of her association acting as advisors to other women’s groups.In the second phase of her work, Kardiatou is reaching out to women’s groups in the periphery of Bobo Dioulaso and using the members of her association of women foresters living in those towns to provide these groups with support. Additionally, to spread her approach to neighboring countries, she has begun to work with the forestry training school for the Sahelian region to organize women foresters and provide them with training as part of their curriculum.

Kardiatou is one of ten children. She was nicknamed “Degnouma” which means “good child” because she was especially helpful with the family and was active in youth organizations. Her older sister, a natural science teacher, supported her in her studies. As a young agricultural science student, she focused on forestry and fisheries, and especially on forestry conservation and management issues.Kardiatou struggled as a woman in a field dominated by men. She organized other women to break out of their isolation and tackle specific problems together, such as raising children while on the job and integrating their children into the work field. When she left the forestry service to start AMIFOB, she had served as a senior forester and as the person in charge of Burkina Faso’s fishery resources. This was a major achievement as she was one of the few women in her generation to successfully choose forestry and fisheries management as a profession and continue it during a full term of government service. Kardiatou’s organization has received many prizes from the Permanent Interstate Committee against Desertification (CILSS) for its struggle against desertification and drought in the Sahel, including the national prize for the best forestry park. It has also received the regional prize for the best initiative combining the fight against poverty with environmental protection. Kardiatou also received the honorary medal of water and forest civil services in 2000.Kardiatou has also been co-opted by several network and decision-making bodies and has been the Chairperson for the Women and Environment Network since January 2008. She is the mother of four children.