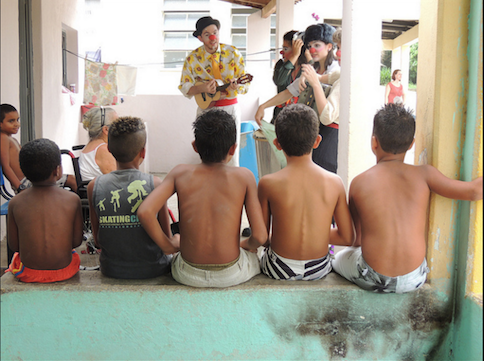 Doutores da Alegria (Doctors of Joy) revolutionized Brazil’s healthcare industry by introducing the element of joy into the pediatric environment. Doutores’ work enhances the health system’s ability to provide comprehensive care to children by addressing both their psychological and physical needs. By placing clowns professionally trained to perform in hospitals and other medical facilities, Doutores reaches patients, visitors, and doctors and alters the emotional and power dynamics within spaces where children normally feel powerless. For children, the well-thought performances help reduce the emotionally painful experience of medical treatment. Medical staff also benefit from interactions with the clowns. "It makes me feel better and it changes the way my patients relate to me," intensive care pediatrician Dr. A. Massai in Rio says.

A professional clown by trait, Ashoka Fellow Wellington Nogueira conceived Doutores in 1991 after he was inspired by a similar project with which he had worked in New York, the Big Apple Circus Clown Care Unit. To accomplish his goal of delivering Joy to hospital children through clowning, Wellington started by meeting with managers of a local hospital in Sao Paulo. There, he explained to the group the simple concept: “I’m here to bring Joy”. Currently, Doutores works in ten hospitals, seven in Sao Paulo, two in Rio de Janeiro, and one in Campinas and employs 41 actors and 15 full-time staff. In addition to traditional performances in hospitals, Doutores spreads its work, knowledge, practices, and philosophies through workshops on relationship building with medical staff, publications highlighting the organization’s work, and educational public performances. These additional initiatives comprise Doutores’ comprehensive and savvy citizen base strategy by tapping into various aspects of the community that would otherwise be out of touch with the organization’s work. In line with the work of Doutores, the Brazilian Government inaugurated the Department of Humanization of Hospital Services in 1999.

Exhibit the Joys of Success to Crowds

Engaging Brazil’s general public by directly showing them the organization’s successes serves as a fundamental piece of Doutores’ citizen base strategy. Doutores’ theatrical presentation of the organization’s “annual report” produces a large public spectacle as the acting doctors creatively present the previous year’s expenditure of publicly-donated funds. The idea of bringing Doutores’ work directly to the community began early in the organization’s history, as Nogueira strove to build a solid foundation for public awareness and involvement. Throughout the year, Doutores plans free midnight public performances to increase its visibility and raise awareness of its work. The performances require little additional work on the part of the clowns, as they are simple extensions of the work done within the hospital setting. Doutores clowns also perform in restaurants, approaching patrons the very same way they approach children and also answering patrons’ questions about the nature of hospital clowning.

Nogueira derived one of his first concepts of combining public displays of Doutores’ work to raising funds by designing an event based on a legend of poor Italian immigrants who, after sharing of a meal of gnocci with a disguised saint, never again suffered hunger or poverty. As the legend goes, the saint left money under his plate as evidence of his gratitude to the couple for sharing what little gnocci they had. Nogueira adapted the story to Doutores’ cause by introducing the tradition of leaving money under the plate following a meal of gnocci and developed a community-wide event for patrons of gnocci dinners to donate money to Doutores. Because of its originality, newspapers gave the initiative ample coverage, greatly helping Doutores become known to a wider public. According to Nogueira, “It wasn’t just the money I was concerned with. I want to involve the public. I want them to know us outside a hospital setting, understand us, be touched by our work and thereby bring others to help.” The tradition continues in semi-annual events with more than five hundred supporters in attendance, entertained by a troupe of clown actors. The events now generate 10% of Doutores’ annual budget and also act as a membership drive. In return for a yearly donation of approximately US$17, members receive newsletters, giveaways, and emails on birthdays and the anniversary of their first donation. Doutores’ mailing list contains more than 15,000 names, and a third of the contacts are annual donors, accounting for 9% of the annual budget.

As an additional means of revenue, the group performs in medical conferences, simultaneously educating and entertaining medical professionals. Through this networking effort, Doutores has gained the respect and support of the medical industry. Corporate lectures and appearances earn 18% of Doutores annual budget, and the organization plans to increase its income-generating activities by training clowns to duplicate it models for a fee in other cities in Brazil for a fee.

Doutores recognizes the needs of various donors and subsequently adapts its relationship to fit each partnership. In a business environment increasingly focused on corporate social responsibility, Brazilian corporate partners seek opportunities to donate resources to CSOs. To meet the needs of these corporate partners, Doutores employs a regimen of meticulous fiscal responsibility, allowing corporate partners to remain accountable to their financial investors. Doutores was rewarded in 1994 with its first substantial source of income-- sponsorship from a local advertising agency. In exchange for financial support, the agency used the organization’s performers in its commercials. Currently, Doutores enjoys major national sponsorship from several major corporations including Tylenol and ASTRAZENICA, whose company logos they display on their clown actor uniforms and at public events. Doutores’ success in engaging corporate partners has paid off—corporate partnerships provide 54% of Doutores’ annual budget while corporate sponsorships, via a lesser degree of involvement, provide an additional 11% of the annual funds.

Doutores selects corporations who share the mission of improving the well-being of children to ensure mutually beneficial and long-term partnerships. This rigor in partnership selection allows Doutores to focus on the needs of each partner at an individual level. For several corporate partners, on-site presentations play a vital role in building relationships among the business community and additional income for Doutores. Doutores continuously cultivates corporate relationships through marketing efforts and engaging partners through thank-you cards, small gifts, sharing financial reports and free presentations for corporate staff. 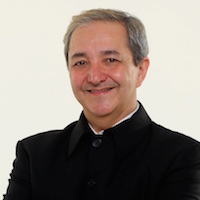 Wellington Nogueira was elected to the Ashoka Fellowship in 1998.