Harley Henriques do Nascimento is combatting the spread of HIV/AIDS in the Brazilian state of Bahia, through a network of peer educators based in the region's disenfranchised communities. 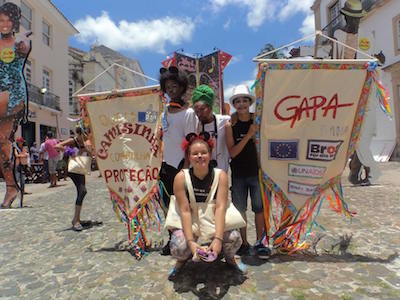 Harley Henriques do Nascimento is combatting the spread of HIV/AIDS in the Brazilian state of Bahia, through a network of peer educators based in the region's disenfranchised communities. His organization, Grupo de Apoio à Prevenção à Aids da Bahia (GAPA) promotes HIV/AIDS awareness and prevention by engaging local leaders to become drivers of change in remote areas of Bahia, where poverty rates are highest and government-sponsored prevention programs are non-existent.

Fifteen years of public policies in Brazil have not curbed the spread of AIDS. Campaigns have reached larger cities like Rio de Janeiro and São Paulo, but have ignored Brazil's rural northeast where vulnerability grows daily. Harley's own experiences have shown him that accurate information about AIDS is difficult to find. He also realized that anyone with fewer resources and less education than his own would have even more trouble obtaining accurate answers to their own life-or-death questions.

In Bahia, forty-three percent of the population is illiterate. Among Afro-Brazilians, who make up 80 percent of Bahia's population, more than one fifth are unemployed. When people are under-schooled and under-employed, they rarely have the ability or resources to find accurate information about health and AIDS. Moreover, the challenges of transportation and communication which plague rural areas worldwide represent stumbling blocks for spreading information to the people who need it most.

To address the lack of awareness and access to information regarding HIV/AIDS, Harley implemented a wide variety of local education programs through his citizen sector organization. Some key programs include: Program for Community Educators, Public School Teenage Program, Young People in Restricted-Liberty Situations, and AIDS Education Programs with a focus on gender and ethnic relations for homosexual and bisexual people. Through its training courses, GAPA builds the local leadership; it also advocates advanced strategies to fight the epidemic and promotes behavioral changes among the least-privileged members of society.

GAPA's education program begins with training members of each target group to teach practical AIDS prevention information to their communities. Before entering a community, Harley and his staff identify leaders who will serve as facilitators. For example, low-income adolescents teach their friends in social settings, peers educators train others in schools, and community representatives work in a local meeting place. In public schools, Harley collaborates with principals and teachers to seek teens who can educate their classmates about HIV/AIDS. In municipal health centers, GAPA-BA helps coordinate sexual health counseling for low-income women and adolescents. The same strategy works in associations for favela (slum) residents, Afro-Brazilian political and cultural groups, and various religious groups that run programs for poor women and youth.

Harley's initiatives raise the organizing powers and awareness of human rights among stigmatized groups like the illiterate, the extremely poor, Afro-Brazilian women, young people, and homosexuals. GAPA reaches this vast target audience via partnerships with existing social organizations that represent and work with the populations themselves. It responds to the individual needs of the fifteen communities in which these organizations currently work instead of imposing initiatives.

For example, Salvador, a beach resort in Bahia, Brazil, is the center of the Afro-Brazilian community and a tourist hot-spot. Each year it attracts thousands of foreign tourists who infuse the local economy with hard currency – giving an otherwise poor community, a major boost. Unfortunately, economic gain isn't the only impact tourists have in Bahia – HIV/AIDS is on the rise in the area, and proliferated, to a great extent, by a growing sex tourism industry.

Heeding this reality, GAPA has established critical relationships with the management of six hotels in Bahia. The hotels allow them to advertise AIDS awareness through condom displays and posters within each hotel and offer logistical support and the assistance of hotel staff. Guests may choose to give an additional 5% of the total of their bill, or another amount determined by the guest, as a donation to GAPA.

GAPA directly serves over 20,000 people per year and reaches 1.8 million more through public education campaigns. However, funding for his organization is difficult to come by. GAPA has invested in strategies that will allow them to reduce their dependence on international resources by converting to local resources. With that in mind, GAPA has concentrated its fundraising efforts on the private sector, art celebrities, media, entrepreneurs and clients from the tourism and entertainment sector.

Harley Henriques do Nascimento was elected to the Ashoka Fellowship in 1998.