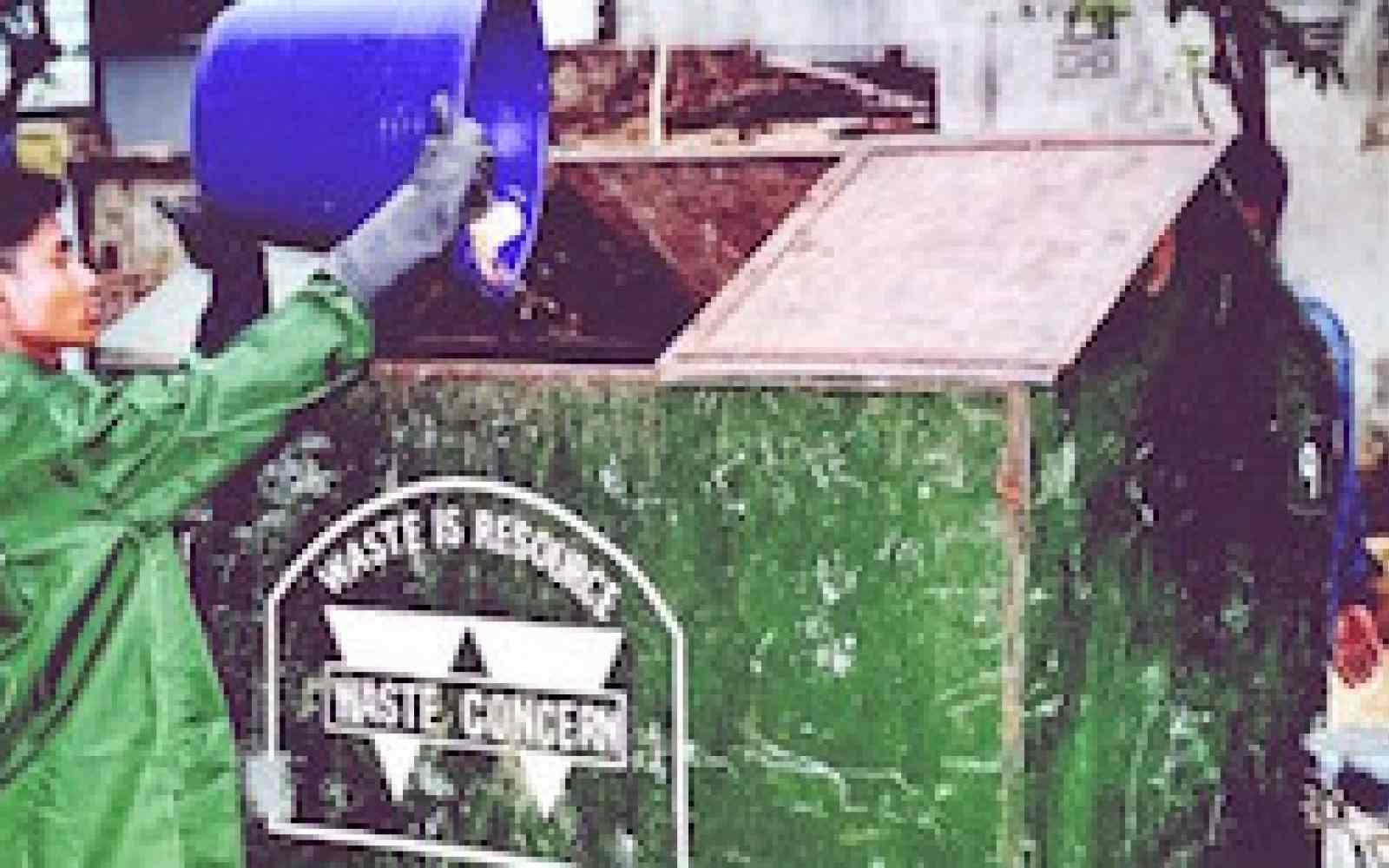 CASE STUDY: Concerned Scientist With A Cause 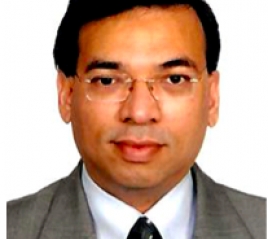 Waste Concern establishes large-scale community recycling ventures that transform organic waste into marketable compost. The transformation of trash to fertilizer answers two salient problems in Dhaka’s development, (1) The large surplus of waste and (2) Infertile soil in surrounding rural land devastated by overuse. In Dhaka, individuals, businesses and industries create close to 4500 tons of solid waste per day, of which the municipal government has the capacity to collect and dispose of only 45% of this waste. As a result, residents dump garbage onto the streets, exacerbating the existing unsanitary conditions and massive health problems already present in densely populated urban slums. In addition, years of heavy farming of rural land around the city have devastated the fertility of the top soil. The chemical fertilizers used in response had begun to kill off local fish and wildlife and had therefore been restricted by government. Farmers need a cheap, organic way to support their crops and reinvigorate their top soil. Waste Concern moved beyond finding a way to help bring the city’s trash to landfills as a solution or simply reduce the amount of trash. Instead, they developed an alternative use for waste, by asking the question, “Can waste have a value?”

Leveraging advanced degrees in Science and City Planning, Waste ConcernFounders Sinha and Enayetullah relied on logical research and pragmatic problem solving skills to generate solutions to pressing social problems. Sinha and Enayetullah conducted a ‘door-to-door’ survey of residents, businesses and local industries to determine the actual content of their produced trash, finding organic material comprised 80% of the city’s waste. Sinha and Enayetullah hypothesized that the majority of the waste could be converted to fertilizer.

Waste Concern ran a trial of their experimental process, an easy to replicate composting facility and technique, on land donated by a local chapter of the Lions Club. To inform and ensure club members of the project’s feasibility, Sinha and Enayetullah produced a clear presentation of their idea and data collection results pitched the request for the use of land as a “science experiment”. The team’s efforts succeeded, and their science experiment quickly generated proof that their self designed composting technique could work. 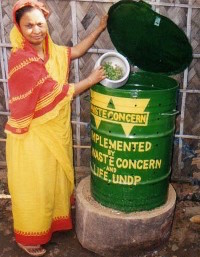 Waste Concern hires impoverished or marginalized citizens (particularly women) to collect organic kitchen waste from households within poorly serviced neighborhoods and slums and deliver the trash to the organization’s community centers. Citizens serve as a great resource for labor, as they are both familiar with the communities in which they work and work for a reasonable cost. Waste Concern always builds composting plants close to the community they aim to serve thereby giving that community a sense of ownership over the project, a sense of participation in improving their quality of life. As a way of generating support, households are treated like clients and are required to pay for the service, an additional form of funds.

Following the composting process, rural farmers living outside the city pay readily for the organization’s product, which produces an organic fertilizer. The Concerned Scientists built client trust by actually driving out to farmers and showing pictures of the results of their first pilot tests done on the Lion’s Club land. Also, as farmers often lacked transport, they developed a variety of means of getting the product to the rural countryside, including a fleet of trucks.

Waste Concern now also sells its products and services to a number of local industries with waste disposal problems. For example, industrial poultry farming is on the rise throughout Bangladesh. Poultry manure if allowed to collect creates a rancid smell and a number of Dhaka based poultry plants have received angry complaints from nearby residents. A number of poultry farms have commissioned Waste Concern to develop a poultry manure composting technique.

To attract Waste Concern to operate in more slums, the government has agreed to donate parcels of land in poorly serviced areas. An unfortunate coincidence, the city’s more populated areas simultaneously exhibit the greatest need for a Waste Concern project but also place the highest premium on land needed for the building of a composting plant. By partnering with the government and seeking land donation for their project, Waste Concern gains access to these crucial waste zones and the government gets a more satisfied and healthy constituency.

Now that their legal organic fertilizer has proven both effective and valuable, private fertilizer companies looking to create new products have approached Waste Concern in order to purchase the compost for sale to larger markets.

Replicate the model to expand the scope of influence

Waste Concern sells their patented process and information online by charging for downloadable material through their website. This online presence helps to market Waste Concern's ideas to non-local markets and the organization’s research scientists and planners continue to develop new kinds of composting techniques and structures suitable for a variety of community types in order to bring their product to as many areas as possible.

By creating mutually beneficial partnerships among citizens, government, small business and large industry, by relying on the validity of their research to guide their process and marketing and by refusing to give up until they had solved the devastating health problems of their city, Waste Concern has created an efficient, sustainable strategy for dealing with Dhaka’s solid waste crisis.

Waste Concern has signed a memorandum of understanding with the Dhaka City Corporation and the Public Works Department for setting up composting plants in 5 different areas of Dhaka City. In addition, the Public Health Engineering Department of the Ministry of Local Government, with assistance from UNICEF, replicated Waste Concern’s model in 14 towns of Bangladesh.

Waste Concern seized an opportunity from Clean Development Mechanism of Kyoto Protocol and attracted US $10 million Foreign Direct Investment for a 700 ton per day capacity composting plant and a landfill gas extraction and utilization project registered with the United Nations. World Wide Recycling B.V., a private Dutch company, and two international banks are financing the projects for more than US $10 million, in return for carbon credits, compost and a percentage of the gas production. The compost plant is under construction and is expected to start operations by the end of 2007. The Landfill Gas project in Matuail is awaiting Dhaka City Corporation’s approval. These projects are expected to reduce about 1 million tons of greenhouse gas over an eight year period, produce 50,000 tons of compost annually and create more than 1000 new jobs for the poor.