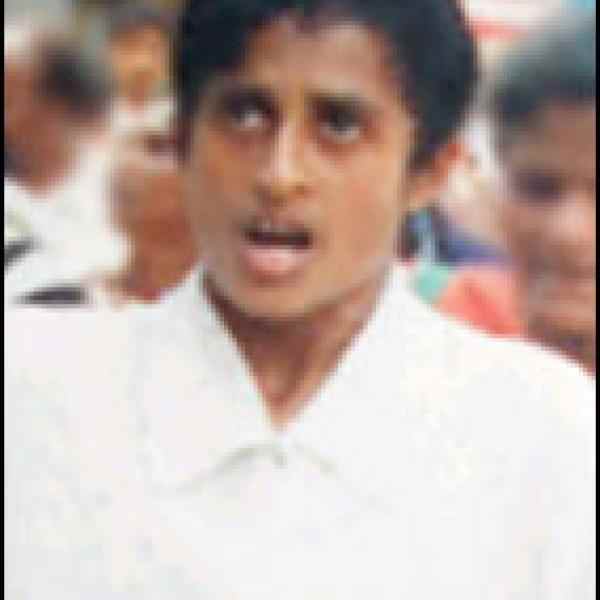 In the late 1980s, as many as 60,000 Sri Lankan citizens “disappeared” in a wave of abductions, torture, and extrajudicial killings by state agents. Though the political climate of the country has since improved, society remains silent about the killings, stifling any chance of justice for the victims and stunting the entire field of human rights. Jayanthi Dandeniya, whose brothers and fiancée were killed in the violence, is now leading a nationwide effort to reestablish discourse on peace, human rights, and the rule of law through mobilizing victims’ families in the human rights movement.

Jayanthi sees the families of those who disappeared during the “terror” of 1988 to 1992 as an important missing link in Sri Lanka’s human rights effort. These are the people with the greatest personal stake in ensuring that the country neither forgets the past nor allows another total collapse of law. Relatives of the disappeared bring an important asset to the human rights movement: a sustained interest in revealing the truth and genuine desire for justice. Jayanthi is seeking out the families, linking them together into a national network, and transforming their grief and hardship from a private burden to a public search for justice and legal reform.
This delicate process requires time and patience, as shame, fear, and isolation have kept the families from speaking about their loss. Jayanthi brings families together and helps create a public space where they can remember the dead. Because of her efforts, the first Monument to the Disappeared honoring those who died has been erected at a prominent intersection, compelling new families to come forth and share their experiences. Jayanthi is planning a series of similar monuments throughout the country.
Building a community and providing a space for public expression are means to a larger end: strengthening society to resist another episode of violence. Janyanthi is mobilizing families as a much needed citizen base for the human rights movement. In addition to pressuring the government to create a law officially making kidnapping a crime, she is connecting them to campaigns against torture, groups that monitor the effectiveness of the National Human Rights Commission, and organizations that work to improve conditions in the free trade zones where abuse with impunity continues unabated.

In the late 1980s, following an insurgency in the south, Sri Lanka experienced an extraordinary and unprecedented rise in violence. The insurgency and counterinsurgency resulted in killings and mass disappearances that shook the entire country. This occurred in addition to state-sponsored violence occurring in the north and east. The government estimates that between 1988 and 1992, about 30,000 people disappeared in the south; citizen groups estimate that as many as 60,000 disappeared nationwide.

During this dark period of Sri Lankan history, human rights abuses were rampant; trade union activists, journalists, and any young man who spoke up about the injustice were under suspicion from the state. Many disappeared, and their bodies never found. Fear and shame kept their families silent about what had occurred. Because no one spoke of these disappearances as unjust kidnapping and murder, the prevailing attitude was that bad people were getting what they deserved. Thus, when a family member disappeared, it was considered evidence of their wrongdoing, a stigma that confused and confounded families. With no hint of due process, there was no real determination of who was actually opposing the state, and instead leaps were made from mere suspicion to extrajudicial execution, leaving families dizzy and bewildered. This was exacerbated by the fact that in this climate of violence many people seized the opportunity to settle old scores, vendettas, business conflicts, and personal rivalries. It was never entirely clear why someone was targeted or what triggered abduction.

In most cases, families never recovered a body, preventing proper funeral services and creating a vexing question mark on the fate of their missing sons that left deep scars. Even when a body was recovered, security forces usually prevented families from seeking closure. Neighbors were warned not to attend funerals, and so the immediate family carried them out in private or in secret. Police ordered families to carry the bodies low to the ground rather than at shoulder-height, as is the custom. The result was an enforced state of denial.

At the time, the citizen sector was unable to respond effectively to the crimes, and then in the following years when the violence subsided, it never prioritized the disappearances. Most social movements in Sri Lanka, particularly the human rights movement, had their origins in a period much earlier than the 1980s that emerged from a very different milieu. The leaders and issues were primarily city-based. The social and cultural background of most of the leaders limited their involvement to activities such as holding seminars, publishing journals or papers, and alerting the western press to atrocities, and many even had links to the establishment that was responsible for the tragic violence. By contrast, the disappearances were largely a rural phenomenon, as the government tried to preempt an insurgency by killing off vocal young men. After 1992, as conditions “returned to normal” in the cities, the sector’s interest in the rural victims waned. Meanwhile, opposition politicians used the disappearances to court rural votes, making loud promises of justice and restitution. However, after the new government was installed, no real action was ever taken by the established Presidential Commission on the disappeared.

In recent years, though mass disappearances have subsided, the enabling conditions still exist: police torture is a major problem, the judiciary is fighting to remain independent, war and insurgency continue, and impunity still emboldens the authorities to take any action they please in the name of state security.

Jayanthi is coaching families of the disappeared through a delicate process of turning their private grief into a public search for justice. Her strategy is to facilitate this transformation and gather its collective force nationally.

After several years of organizing out of the spotlight, she realized that the families faced enormous obstacles in dealing with the death of loved ones. The combination of social stigma and cultural guilt prevented the local groups that Jayanthi established during the 1990s from taking more public action. Remarkably, people living together in the same village whose children may have suffered the same fate had never spoken to one another about what had happened. Therefore, a key element of Jayanthi’s work is to reach out to families and build local support groups. The groups share information about each of their experiences and carry out social welfare activities, such as providing scholarships and other educational opportunities for children of the disappeared. Jayanthi has now networked these local groups into a national presence Organization of the Parents and Family Members of the Disappeared.

In 2000, Jayanthi was recognized by a Korean human rights organization and was invited to Kwangju to join an annual celebration. This experience was a turning point for her work. She saw how an entire city had developed a public means of preserving the memory of a violent episode in its history and from it had created a public discourse on human rights. Jayanthi marveled at how the roughly 500 deaths that resulted from the Kwangju Uprising, a citizen-led resistance to military dictatorship in South Korea in 1980, sparked such an intense public commitment to human rights. By contrast, tens of thousands of Sri Lankans had died in the late 1980s, but the society remained silent about it. Jayanthi discovered the missing piece she needed to lead the families past their own doorsteps and into a public space.

Jayanthi returned to Sri Lanka and began planning for the first Monument to the Disappeared. Her vision differed radically from a typical public statue. For one thing, it would be created by citizens and for citizens, with no participation by the state. It would also be a site for public activity, particularly funeral ceremonies for families of different faiths. Jayanthi began raising money for the monument and secured a donation to buy a small plot of land at a well-traveled intersection. The monument would include photographs of those who had disappeared, with room for expansion as more families came forward. The first monument, in western Sri Lanka, opened in 2001, with a public event that focused on funeral rites for the dead and speeches by families about the need to prevent further violence. Local families maintain the monument and take requests for new names to be added to it. It serves as a permanent memorial that compels the public to come forth, record the past, and speak openly about what they went through. The activities at the monument managed to catch the attention of the press, and so the subject of the disappearances has now been reintroduced in the public discourse.

Jayanthi is currently planning to build at least three more memorials in different parts of the country. She is also working with families from Kandy, Galle, and Matara to erect a monument for their disappeared family members, believing that bringing these families together can also help narrow the ethnic divide and improve prospects of cooperation between the three communities. In addition, Jayanthi is mobilizing families of the disappeared in the south and north to demand that the government implement the recommendations of the Presidential Commission on Disappearances, which produced a series of comments on legal reform to safeguard the country against abuses of state power. This public pressure is necessary to give the government some incentive to implement reforms.

One of the most significant effects of Jayanthi’s work has been revived interest in the disappearances across many parts of the country where the memory of these incidents may otherwise have been completely lost. Because of her efforts, groups of family members have formed in other areas and are contacting one another and participating in healing activities

Jayanthi was one of ten children born to a carpenter father. She and her siblings had to work throughout their childhood to earn money for school books and other school fees.

After finishing school, Jayanthi started working in a garment factory in the Free Trade Zone. She became engaged to a vocal worker in another factory who sent petitions to the labor department regarding violation of basic rights. The management called him in for an inquiry on October 26, 1989. He went to the inquiry with his lawyer, and they never returned. It was later discovered that they had been abducted, shot, and burned. In addition to this tragedy, Jayanthi’s brother was taken away by the police and shot dead in 1989, and her older brother disappeared in August 1990. When Jayanthi began lodging complaints to the police about the disappearances, she started getting followed by strangers and then lost her job. After receiving several threats and fearing for her life, she went into hiding.

In 1992, when the situation improved, she returned to her life and began her determined fight for justice for the thousands who disappeared. Jayanthi’s work with families of the disappeared has been a long and gradual process. Among the families she met while in hiding and trying to reassemble her life, she earned the reputation of being someone who would not only listen, but genuinely try to help. Since most of the victims were young workingmen, the economic impact of their deaths was devastating to poor families. They left young widows, infant children, and aging parents, all of whom had depended on these men’s incomes. By helping families meet their needs, either through informal “mutual aid” groups or by directing outside resources to needy families, Jayanthi gained their trust and had the opportunity to learn about numerous cases of disappearances. These programs have now evolved into scholarships that provide children of the disappeared with computer classes and English tutoring.

Jayanthi still devotes part of her work to labor rights in free trade zones, where international manufacturers run factories under draconian conditions. As Jayanthi’s own story demonstrates, the same climate of impunity that pervades the “Zone” is what led Sri Lanka into terror. She hopes that never again will such human rights abuses take place in her country.