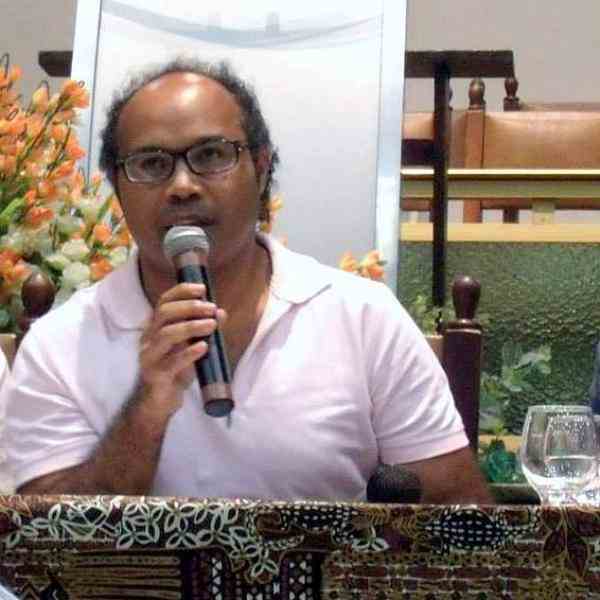 Hernani da Silva is addressing the social and economic exclusion of blacks in Brazil by combating racism within Brazil's fastest-growing religious segment: evangelical churches. He is building bridges to the secular Black Movement and government. Hernani is also launching human rights campaigns and stimulating a debate on racism between ministers and congregation members to find answers to social, racial, and economic exclusion.

Hernani is fighting the deeply embedded culture of racism in Brazil by first changing the way evangelical churches in Brazil perceive and understand black culture. As a member of the Evangelical Pentecostal church, he is introducing the theme of racism and human rights within churches with the goal of improving the socioeconomic situation of blacks in the country. Hernani's idea rejects proselytizing. Instead, he is promoting tolerance, debate, and awareness about racism to ensure blacks' right to practice their religion of choice, while maintaining their culture and identity. Hernani uses this point of entry to open spaces within religious spheres, typically closed to outsiders, to form social groups that value black culture. At the same time, he is introducing professional training courses and community housing projects to poor communities that have a majority of black evangelical church members who open up opportunities for economic development and inclusion previously unavailable. By joining the theme of racism to socioeconomic exclusion among members both within and outside the churches, Hernani is working to convince evangelical churches to make a commitment to improving the socioeconomic situation of their members.
Hernani is the only person dealing with the issue of racism among Pentecostal Evangelical Churches, and he is using this role to bridge the gap between blacks within the church, leaders in the "Black Movement" (the leading antiracism coalition in the country), and the government.

Blacks in Brazil occupy the poorest, most marginalized parts of society and are highly concentrated in the peripheries of large urban centers. In spite of an impressive movement to challenge these appalling conditions, racism remains deeply embedded in the country's institutions and far too pervasive among its people. At the same time, Brazil is undergoing a religious demographic transformation. Historically a Catholic country, Brazil is seeing a great increase in the popularity of evangelical churches. Nearly 30 percent of the Brazilian population are now members of evangelical churches, and the proportion is growing. Whereas the population of Brazil is growing at an estimated annual rate of 1.18 percent, membership in evangelical denominations is increasing by 5.18 percent. It is further estimated that by the year 2032 the overall percentage of evangelicals could reach 50 percent of the total population. Evangelical churches are divided into denominations and local ministries. Lack of regulations for starting an evangelical ministry has generated strong competition for membership, with ministers and pastors pressured to keep their congregations full. Charlatan cults represent a growing movement set up to collect tithes from poor people wooed with promises of prosperity and salvation. In so doing, the cult leaders get rich on the members' tithes. The majority of this evangelical population, up to 80 percent in some ministries, is of African descent.
In most of the evangelical denominations, principally Pentecostal and Neo-Pentecostal, black culture and values are degraded or rejected. Ministers and pastors purportedly make frequent derogatory references to black people's culture, music, religion, ancestry, and skin color. The Neo-Pentecostal church, in particular, has raised alarm among secular human rights leaders, stemming mostly from its resurfacing of racist concepts from the South of the United States, where the Bible had been used on occasion to justify slavery and segregation. Paradoxically, the largest and fastest-growing contingent in these churches is people of African descent. Many blacks who are victims of racial discrimination and social exclusion in Brazilian society are attracted to evangelical churches by the promise of "equality" in the eyes of God through the adoption of a "white soul." Black members learn and absorb the notion that their culture is bad, believing that the more you reject it, "the closer you are to heaven." As a result, black evangelicals themselves abominate their origins and lose their identity.
The rejection of black culture within the church is also the cause of an acute cultural and religious conflict between evangelical churches, particularly the Pentecostal churches, and the Black Movement. The Black Movement, a consortium of Afro-Brazilian leaders and organizations leading the fight against racism in Brazil, has maintained a strong affiliation with Afro-Brazilian religious groups. Evangelical churches have remained impenetrable to initiatives promoted by the Black Movement.

With 10 years of experience investigating and analyzing the problem of racism in evangelical churches, Hernani is using his credibility as a member of the Pentecostal church to spotlight the issue of racism in congregations in the periphery of São Paulo. By conducting human rights seminars in churches and poor communities, he is changing the way black culture is perceived within evangelical churches. Hernani works with pastors and congregation members to stimulate a rereading of the Bible that reevaluates the role of blacks in society, a role historically camouflaged or rejected because of racist interpretations of religious doctrine. As a result, many of the churches where he is working have formed permanent groups to continue discussions on inclusion and equality. Others have even formed black cultural groups like samba and pagode musical groups previously denigrated within the church.
The key to Hernani's strategy is addressing the pressures that pastors feel to maintain membership in their ministries. These pressures include competition from charlatan cults, as well as from rival ministries and churches. Hernani gives pastors in organized evangelical denominations an option and an opportunity not only to embrace black empowerment not only in the name of human rights, but also to strengthen the evangelical movement. He has developed a low-cost, three-day seminar on both violence in the community and racial equality in the church, and he has already involved 300 pastors and church leaders. He builds partnerships with a participating ministry for the facilities, and attendees contribute nominal fees to cover food and transportation costs. Pastors leave with a proposal for addressing racism and violence in their ministry and the tools for implementing it. Hernani has gained support from the Ministry of Justice to support more workshops. The government's motivation in working with Hernani is to decrease violence with the help of evangelical churches. Hernani's bridge-building approach serves this intent.
Believing that the social and economic problems facing blacks is a result of the perpetuation of racist attitudes, Hernani's goal is to turn the theme of human rights and racial inclusion into a social movement within the churches and communities where they are most influential. To do so, he is simultaneously developing social initiatives in poor communities to stimulate professional development and access to information, particularly via the Internet. He has created initiatives to train youth professionally, promote youth leadership, and undertake group housing projects in poor neighborhoods where the majority of inhabitants are members of evangelical churches. He is also engaged in empowering black women, since women hold an important role in evangelical churches, thereby promoting not only racial but also gender equality. By developing an array of community programs that address issues of youth development, gender equality, housing needs, and violence prevention, and by linking them to the churches, Hernani is creating mutual commitment between the congregation and the community to improve the quality of life of poor blacks.
Hernani plans to spread his idea nationally by setting up centers and ministries to combat racism and xenophobia within all the evangelical Pentecostal denominations. After consolidating his work in São Paulo, Hernani plans to set up work in Rio de Janeiro and in the long term in his native Northeast region. He is already in discussions with the leadership of a large Pentecostal denomination to implement a national program on human rights within its network of churches. The pilot initiative in one of the churches in São Paulo is already slated to expand to all the other churches in the city and in the future to other large denominations. Hernani's idea is to use the experience within those churches relatively open to the themes of human rights to stimulate change and open spaces in more closed congregations. He plans to reinforce and spread the work he is beginning at the grassroots level by creating public policy changes at a national level. He is lobbying the National Secretary on Human Rights to create a council of ministers from traditional churches from across Brazil to open up dialogue with ministers from Pentecostal and other evangelical churches.
Hernani carries his message of inclusion and tolerance to his strategy for implementing his idea. He has developed partnerships and garnered support from national and international ecumenical groups and government bodies including the National Ecumenical Commission to Combat Racism (CENACORA), the Ecumenical Coordinating Service Center (CESE), Capacity Building Solidarity, World Council of Churches, and the Association of Group Action of São Paulo.
While introducing the theme of racism to the church communities, Hernani is working to begin a dialogue between the churches and the Black Movement. Since the Black Movement is the leading force opposing racism in Brazil, and the evangelical movement is the fastest-growing threat to racial progress, bridging the two movements will be key to positive change. From his position as an evangelical, Hernani hopes to strengthen and reinforce the role of the Black Movement as a transformative force for Brazilian society.

Hernani grew up in the poor Northeast region of Brazil where his mother was a maid at a local Catholic convent. There, though just a boy, he worked as a handyman to contribute to the family income and was always bothered by the humiliation and discrimination his mother faced. Growing up in an isolated town, Hernani often experienced discrimination based on the color of his skin, and he internalized it, believing that blacks were poor because of their race. Surrounded by crime, violence, and drugs, he found support and promise in the small Pentecostal ministry he joined that promised material prosperity and spiritual cure. Nevertheless, he was still disturbed by the racist attitudes being delivered and accepted by the congregation members, the majority of whom, like him, were of African descent. Hernani kept to himself during his adolescence, but he was an avid reader and sought out books&#150;always scarce. At 17, Hernani "discovered" Martin Luther King, Jr., in a biography and was profoundly changed by the inspiring life of a man of faith who fought for racial equality. Like many others migrating south in search of a better life, Hernani moved to São Paulo. There, the story of discrimination was the same, both in and out of the church. Instead of leaving the congregation, he decided to form a youth group to fight racism but found himself rejected by the church. He sought out information and support from organizations and leaders in the Black Movement where he faced even more intolerance because of his religion. This experience made Hernani realize the importance of combating racism within his church and bringing the church and the Black Movement together.
Though this challenge has proved daunting, Hernani is in a unique position. Through his experience working intensely in poor communities, his membership in the Pentecostal church, and his identity as a black man who has had to overcome racial discrimination, he has gained credibility vital to spreading his idea. In 2000 the federal government recognized the value of his work, awarding Hernani the Human Rights Award created by the President of Brazil to honor people and institutions performing exemplary work in the field of human rights. His work was also recognized internationally as a subject of the book Blessed Anastacia, which covered gender, race, and religion in Brazil.
Hernani practiced as an accountant for 18 years. He continues to use his professional skills to provide training in accounting, financial transparency, and computer technology to managers of citizen sector organizations in the peripheral neighborhoods of São Paulo.