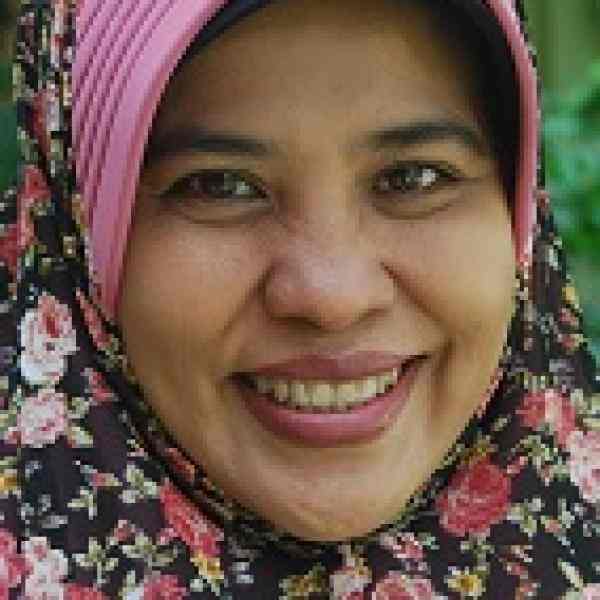 Despite the high health, economic, and environmental costs of poor sanitation, public resources are limited for improved sanitation in Indonesia. Ellena Rachmawati mobilizes communities’ own resources to establish self-reliant, healthy villages, addressing key issues such as sanitation, hygiene, and nutrition.

Ellena instigates a behavioral and cultural change in rural communities by activating them to leverage their own resources for health and environmental development instead of depending on external projects. She overcomes passivity within villages by raising the important issues of health, sanitation, and clean water, and guides the villagers to make their own decisions.

Her work includes teaching the community to change its daily habits. Although this is important in itself for improved sanitation and health, it is also the first step towards wider self-reliance and an important stage in establishing a realistic bridge between the community and outside resources. She goes beyond mapping the needs and resources to engage the communities in what they themselves want to change.

In bringing to light the way in which villages can choose to spend their money – for example, to implement programs to prevent sanitation-related illnesses instead of spending those resources to visit those who have fallen ill after the fact – Ellena opens up a new option for the villages’ financial resources and empowers them to proactively solve their own problems. While local community members generally take a minimal role in managing their own health when a program is directed by the government or a foreign donor, Ellena overcomes this challenge of community passivity by mobilizing communities to creatively use their own resources. Ellena is thus not only changing the perception of the value of local resources, but is also changing the habits and behaviors of community members toward sanitation, hygiene and nutrition solutions.

In practice, prior to establishing an independent healthy village, Ellena and her team make clear to the villagers that they do not bring any funding for sanitation projects. Ellena raises awareness about the causes of sanitation-related diseases and the ecological damage that reduces water discharge. While raising the fact that the government has a very limited budget for sanitation programs while the problem continues, she makes the point that there are no poor villagers as long as they have the money to spend elsewhere.

Once she receives an invitation from the community, she starts with clean water provision – through building water pipes from freshwater sources and community management of reservoirs – as an entry point into the whole interconnected chain of water, sanitation, health, and environmental protection. Once access to clean water is established within a village, the community is able to save money on water management as well as generate revenue by providing it to surrounding villages. This combined with the cost savings of illness-related travel and other expenses, serve as bedrock for community investment.

Ellena has already begun to replicate her model in 47 villages and to train other organizations to bring her model in Papua and Sulawesi.

Only 50% of Indonesians have access to clean water. The natural springs for Lombok Island are in the Rinjani Mountain National Park that is threatened by deforestation and land conversion reduced water supply. The surface water flowing into the village in East Lombok is 71% contaminated by e-coli bacteria that causes diarrhea. Less than half of households use safe drinking water.

In 2005, West Nusa Tenggara Province had an outbreak of diarrhea with over 30,000 cases, which was due to lack of clean water supply. This was made worse by the long dry season that causes respiratory infections in children. Dozens of children died every day. People still defecate in rivers or in the field, as there are no toilets or sewage system. They continue to wash hands without soap and using dirty water.

Although the national government has allocated IDR 10 trillion for a nation-wide sanitation program, East Lombok only receives IDR 170 million to cover 256 villages with 1.1 million people. Despite the limited budget on sanitation, villages keep waiting for government projects or foreign donors to solve their problems. While some villages have tried to address these with their own resources, many have failed, as they were not well organized.

Rural people do spend significant amounts on certain things such as cigarettes or family visits. For example, in Lombok, people have a very close kinship system. Whenever they hear that a family member is ill, they make all possible efforts to visit. This also implies costs for the hosting family to accommodate visitors. Ellena estimates this spending to be as high as IDR 100 million per extended family yearly.

In bringing about changes in the habits and understanding towards resources and thus self-reliance and improved health, Ellena facilitates the community to look into untapped resources. In doing so, she uses a modified CBIA (Community Based Issue Analysis) methodology she got from Japan Organization-JICA training program. She learned that actually without external funding community development is still possible as long as there is a movement within the community. She believes that community has resources, that when are managed could lead to community self-reliance.

She teaches the community to identify facts about their own problems and resources by utilizing all senses including direct observation. The facts then are translated into information through which the community conducts simple analysis for the alternative solutions. Through a future mapping exercise, Ellena helps the community forecast the implications of current practices. She motivates the community using simple illustrations of different choices either to achieve welfare by doing self-organizing or continue the current practice with no life improvement. The exercise helps the community make their own decision.
Prior to reaching out to the community, Ellena learned from the Public Work Office about the clean water problem in the Sajang village. She then searched for information from the District Government office and found out that the clean water will be dried out in the next ten years. She then collects real facts on the ground together with the villagers and learned that the community still has resources including a wide area of forest; the ground water and community working together values are still there in spite of the current illegal logging practices. The findings are brought to the wider community to be discussed. Ellena assures that if the community feels the problem, they will organize themselves even when Ellena helps without project or funding.

The community then set up a team to search for the spring water in 25 kilometers away from the village. It is also agreed that the community is to fund the whole project, which is also to show outside partners that the community wants to make the change. In mobilizing the community’s resources, Ellena helps them calculate the amount of fund they have spent for when they get sick, for example, and how much they need to construct the water system. Realizing the overlooked opportunity, the community then agreed to split the cost equally for each household. Even though the sub-village leader protested that there are some poor families in the village who cannot pay, Ellena convinced them that there are no such poor people but people who impoverish themselves.

Within one year, the village has successfully built the water reservoir with a 25-kilometer pipe from Rinjani Mountain. The whole project cost 4.6 billion rupiahs and gave the village a strong sense of self-reliance. The community manages the reservoir and decides the price for the user fee. The cost per household is now one third of what it was previously. The village is also providing water to villages nearby. The revenue from this is used to pay for the operation and maintenance cost and to provide funding for village’s sanitation and reforestation program. Ellena made an agreement with the National Park that in return for the water, the village would stop illegal logging and maintain the sustainability of the forest.

Providing water served as her entry point to an integrated program of sanitation and nutrition. As the community got access to water, she introduces them to healthy behavior and good sanitation practices. She is not only promoting sanitation and health in the villages but also in schools. Schools have forbidden students to drink raw water and request students to bring their own boiled water. They also have more toilets and have built sinks with soap. The number of diarrhea cases has declined significantly. Today Ellena is working in 46 villages that built in total of 35,000 toilets. Two villages, which originally declined to invest and therefore are turned down, subsequently rejoined the program after seeing the success of the program from the public media.

As part of her work on nutrition, Ellena proposed a regulation to forbid non-iodized salt in the area that was signed into legislation in 2011. Ellena involved farmers to produce iodized salt and create consumer awareness about the importance of iodized salt for expectant mothers and children.

She is actively working with the government, the national park service, villages, midwives, teachers and medical services, and leveraging existing schemes. She has trained sanitation entrepreneurs and village facilitators to replicate her model. Now, she focuses on engaging more villages in Lombok and replicates the model in Papua and Sulawesi with local civil society organizations. Altogether she is working in 14 districts involving 75 villages and 125.000 beneficiaries in Lombok. It is notable that she refused a major short-term government grant on the grounds that community engagement needs to be a measured process.

Ellena was born Susana Helena, the second of five children in a wealthy Catholic family who became bankrupt. Her father took a parking attendant job after being unemployed for several years while her mother looked after the family. She converted to Islam in 1990 before marriage, changed her name to Ellena Khusnul Rachmawati, and moved to East Lombok with her veterinarian husband.

Ellena first got involved in social activism in college, focused particularly on human right issues and leading the student union in college. She left her activism until her two children were grown and then started to work as the personal assistant of the regent’s wife who focuses on social affairs. She worked with Dian Desa – one of the big NGOs in Indonesia – to help them disseminate household mini water purifiers (SODIS - Solar water disinfectant) is simple technology to disinfect water by drying in the sun, the water safe to drink afterwards, in East Lombok and was able to help 5 villages with the budget traditionally allocated for one.

Ellana’s interest in providing clean water for consumption continued and she established Yayasan Masyarakat Peduli in 2000. She successfully distributed SODIS to 17 villages. Until 2004, she worked on a project basis. One day, she realized she was unable to explain to her mentor from JICA (Japan International Cooperation Agency) whether the people really needed the project and what the issue was that people needed to be solved or raised.

In 2005, she was moved by the story of diarrhea cases in which dozens of children died, and she established her organization. She then completed a two years’ workshop with The Japanese Cooperation JICA on community facilitation, and got a chance to learn and practice in Kalimantan and Sulawesi on how to organize and give capacity building to local organizations. With the first village, she failed and was challenged to deepen her understanding of the community. Around the same time, her relationship with her husband began to fail as he complained that she was too busy to stay at home.

In 2008, she met the headman of Sajang Village and decided to visit the village after a long talk with him about the problem of water supply. Sajang became her focus of work after her two years study. Throughout, she integrated health into the issue of water provision. She worked closely with Sajang villagers in 2009 – 2010 to build the water-pipe. As soon as the water program in Sajang was finished, she was divorced by her husband. After the divorce, she dedicated her time to her children and her project. Now she focuses on replicating on the other part of Lombok Island and plans to expand its impact more widely.